Charles Stross’ Quantum of Nightmares continues the story started in Dead Lies Dreaming, as the fallout from the events of that book wraps up Eve, her brother Imp, and continues to show how life in Britain under the New Management is proceeding apace. 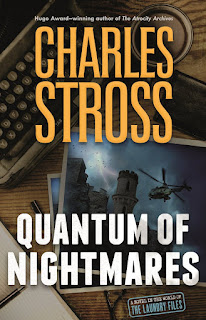 With a change in government, elsewhere as well as in Britain, especially a Britain adapting under an evolving Case Nightmare Rainbow¹ situation, the rise of widespread magic, there are going to be changes to society.  Speed cameras now sport skulls of those who break the law. Superheroes and Supervillains are real, although mental parasites from other worlds will eat their brains if they aren’t careful in the use of their powers. Locks and defenses now include magical wards as well as more mundane physical and electronic locks. And there are cults and societies who are seeking to use the new facts on the ground to bring their own patrons and powers to full flower.

Welcome back to Britain under the New Management of Nyarlahotep, in Quantum of Nightmares. Quantum of Nightmares is the second novel following Dead Lies Dreaming, a new entry point into the Laundry Files verse, and is overall the 11th book set in the series. This review is going to mention events in Dead Lies Dreaming, as a throughline of the novel does follow the consequences of that book. Caveat Lector!

At the end of Dead Lies Dreaming, things looked pretty good for siblings Eve and Imp. Eve is, was, the former assistant to a powerful billionaire lost in an alternate world that he himself had contracted Eve and company to find an important magical book. Eve can possibly just move into her boss’s shoes, since his style of management was “delegate to Eve”.  Eve is also a pretty talented sorceress. Imp has forgotten most of his training in magic they both received, he relies on his superpower of incredible persuasion.  Eve is trying to cement her own power in the wake of Rupert’s departure, but she soon finds that Rupert has snookered here. So she must deal with the fact that Rupert is, oddly enough, a real feudal lord of a tiny (fictional) island in the channel...called Skaro. She doesn’t find Daleks there, but what she does find and have to deal with is bad enough--cultists of an entity called The Mute Poet.  And they have a Plan.

Bringing in Imp means bringing in his team of supervillains and associated people, such as the superhero semi professional thief taker Wendy Deere, who is trying to build on the burgeoning relationship that she started at the end of Dead Lies Dreaming with one of Imp’s crew, the Deliverator Rebecca. Though I should know that  Imp’s crew, although crucial to connecting the various threads in multiple directions, get a little less focus individually in this book than in the first.

The two other threads, and how they connect with this thread and storyline from Dead Lies Dreaming and how it all fits together in the end shows the skill and patience of the author in making this book come together. Even as there are a dozen books in the Laundry Files verse now, Stross is always trying new techniques, forms, motifs to alloy into his genre-aware and genre-referential style and writing.

One thread involves a branch of a grocery store chain, Flavrmart. Amy, the assistant to the head of HR, Jennifer, is much put upon by her boss and by events in the store. Jennifer is demoing and debuting a rather disturbing technique on the workers in the store, but it is the shenanigans of the meat printer technician that sets the ball rolling for Amy to find out just what Jennifer, the technician and others are up to. I’ve worked in a grocery store in my time, so the scenes here are painful, funny, and (for being set in the Laundry Files verse) still ran very true to me.

The second thread is Mary Macandless. Ostensibly she has been hired to watch a set of children while their high flying parents are on vacation. But both sides are keeping secrets. The children’s parents are Superheroes, and the children themselves are manifesting rather alarming superpowers of their own. On the other side, Mary’s real goal is the kidnapping of the children, and she has a rather special handbag in her possession to help her. If you are thinking of a demented Mary Poppins at this point, you will be gratified that Stross leans into this, delightfully.  As you might expect, the planned kidnapping goes oh so very wrong, with a road trip across Britain that is perhaps the funniest part of the book, hands down.

In general, though, although there is a lot of peril and a whole lot of things going oh so wrong, the overall tone of the book, like the previous book, Dead Lies Dreaming, is relatively light and fun. For all of the attempted (and succeeding) human sacrifices, cultists, things brought from other dimensions, and surprises I will leave you the reader to discover, it's all pitched on a page-turning addictively fun plane. The implications and the horror of some of the events are sneaked in through the sweetness of the deceptive surface candy shell of the way Stross is telling the story.  Given how, as I have mentioned before, Stross likes to have a variety of styles, its a way that keeps a twelve book series going strong.

I wondered how The Laundry Files would do as a series and world once the original protagonist, Bob Howard was mostly gone from the scene (due to his power level as much as other things). Now that we’ve had a few novels without him, I can happily report that, yes, for me, the series and world and premise still work without Bob Howard at the center of events or even in the picture at all.

I wouldn’t start here, even if Stross makes it clear what you need to know from Dead Lies Dreaming, especially as Eve learns just how screwed she is by what her former boss has set her up, but readers of that first book, a new entry point into the Laundry Files verse, will find lots to love. Just a word of advice, in the Britain of the New Management: Never, ever, come to the attention of the Black Pharaoh or those who scheme and work under him.

¹Given previous events in the series, a true Case Nightmare Green has been tempered and altered by a partial Case Nightmare Red of the refugee/invasion of the Alfar as described in the novel The Nightmare Stacks. Also, this novel (and a couple of previous ones) make it clear that things are still shaking out).

Bonuses: +1 for a lot of well needed humor in this day and age

+1 for good playing out from the first novel in showing how what seemed like a settled situation just has led to Eve and Imp with new problems.

+1 For more interesting worldbuilding and showing how to keep calm and carry on in Case Nightmare Rainbow.

Penalties: -1 There is a lot in this novel, and sometimes a few characters and ideas sadly get short shrift.