The Justice of Kings by Richard Swan is fine, if you can tolerate the utter lack of diversity 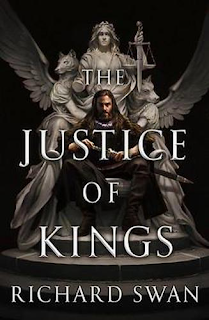 A lot of people are going to really dig this book. A lot of people are going to find in this the exact sort of thing they read fantasy for, with all the character archetypes and plot twists and cool moments and fantasy worldbuilding they want to see in their stories. For me, however, there are several fundamentals of a good fantasy novel that are missing from this one, and I need to talk about them before I start talking about anything else:

So, uh, what can you do when you've got through a book like this, written on purpose in the year of our Zag 2022? If you're still here, either you're waiting for a comment section so you can explain to me how wrong my criteria are (sorry, we don't have one, but you can go collect a free block on Twitter if you like), or you're wondering why I'm bothering to talk about this book at all. So, let's talk about why I tolerated the above and came out still feeling somewhat entertained, I guess?

The Justice of Kings is, technically, the story of Helena Sedanka, an orphan from a conquered territory who is now a legal clerk to one of the Emperor's Justices, a sort of itinerant lawyer/judge/executioner. Helena's narration is told as a memoir, as she looks back on the events from the perspective of an old woman and occasionally gives ominous proclamations about how bad things are going to get, and significantly more charming proclamations about how dense her nineteen-year-old self is. Helena's account is dry, and it takes time for her to open up about herself or talk about the emotional state of other characters, and its through this style of narration that we get to know the real star of the show (and the front cover): Sir Konrad Vonvalt.

(Adri, you read a book with a protagonist called "Sir Konrad Vonvalt" and you were SURPRISED you got almost zero diversity? Yeah, look, I already said mistakes were made. I'll know better next time.)

Sir Konrad, as Emperor's Justice, is tasked with wandering around mainly in the frontiers of the Empire - territories it often just finished conquering a couple of decades ago, in the "Reichskrieg" war - and dispensing justice according to the Empire's Common Law system. With the weight of the emperor's authority, Vonvalt is empowered to hand down sentences from one penny fines up to and including death, with the only real oversight being his own conscience and his accountability to the Order of Justices. As part of his training, he has access to two magical arts, one which allows him to compel the truth from anyone he asks a question of, and one which allows him to speak to the dead, though both come with a high price tag. He's also a talented swordfighter. And handsome! At the point we first meet him, Vonvalt is portrayed as a fair and upstanding person, willing to overlook the letter of the law if he can dispense justice with a minimum of bloodshed. By the end of the book's events, he's done a lot more sword-waggling than fine-levying, and Helena's ominous older self makes it clear that that's the trajectory of things to come.

With its magistrate protagonist, The Justice of Kings wants to be taken seriously as a story of political upheaval through the lens of order and justice. My expectations when it comes to stories dealing with the rule of law are super high, particularly when it comes to administration of colonised places, but I think this story hits a lot of the right notes even if there's a lot more to be explored. There's a lot of showing how the law is inconsistently applied, particularly when it bumps up against the military strength of the church and local nobility, but we see less discussion of the enforcement of "Common Law" as a whole, and how that works in places recently acquired by an expansionist, assimilationist empire.

In particular, we never see Vonvalt or Helena really grapple with the implications of legal events of Rill, the first location in the book, where Vonvalt uncovers widespread "draedism" (i.e. religious heresy), and goes to great lengths to avoid having to record it as a serious crime, instead levying minor fines for villagers to "renounce" their heresy and avoiding any major charges towards the Lord and Lady who are clearly also involved in the old religion. It's transparently the right thing to do: the reader knows it, all the characters except the shitty Empire religious leader know it, and the village itself is reluctantly grateful for being given just enough room to back down without total capitulation. But it's a case of Vonvalt bending the law as far as it will go to ensure justice, and it gives rise to a lot of questions about just how fair and universal this Empire's common law is, and also how far Vonvalt really deserves the characterisation of "upstanding lawman guided by impartial justice and not by his own whims" at the start of the book, and calls into question how much he really changes over the course of events. Of course, we only have Helena's analysis that he has changed, and while her narration is dry and detached in a way that makes it feel trustworthy overall, there's also a strong sense that her judgement around Vonvalt isn't exactly... unbiased. If there are aspects of Vonvalt's behaviour that are being de-emphasised or glossed over in Helena's chronicle, that sets the series up for some interesting potential twists later, but for now that's just one potential direction in a series that's still, as of the end of this book, setting the scene.

Am I going to be back to see this play out? See points 1 - 5 above: that is to say, probably not. Life's too short to read annoying books, and while I see a ton of potential in The Justice of Kings, I just don't think anyone in 2022 writes about this many straight white dudes by accident, you know? I'm sad to have to let go of a series with such an intriguing focus on law, but I'm sure there will be plenty more to pique my interest, and I won't have to play "mad, dead or unimportant" bingo with the handful of women in them.