Microreview: The Art of Broken Things by Joanne Anderton

A new collection of short stories from one of Australia's hidden treasures will break your heart and mend it back together with gold. 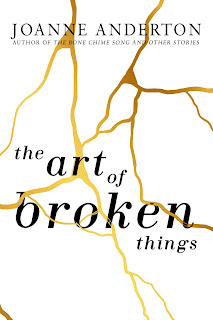 Australia has a wealth of horror writers, authors of dark fantasy and science fiction. This is particularly the case with short fiction. Many readers outside of Australia will know of Kaaron Warren and Angela Slatter, while locals know to also watch for the work of Kirstyn McDermott, Claire McKenna and Kyla Lee Ward. The Art of Broken Things shows that Joanne Anderton is one of the best of them, tugging at the heartstrings with a skill few can match.

This is the author's third collection, containing thirteen stories, most of which were previously published between 2013 and 2020. Two of them ("Wreck Diving"; "Bullets") won Aurealis Awards (Australia's premier juried award for speculative fiction), with two more shortlisted (in the case of "Loose Stones" in more than one category).

One of the delightful things about collections is that they make the preoccupations of the author wonderfully clear. This is most certainly true of The Art of Broken Things. Many of the characters in these stories are outsiders, some literally living on the outskirts of town, others simply strangers in a foreign culture. They are people facing grief or toxic relationships, people who are desperate and despairing.

Being a horror anthology, there is some dark material among these stories, including domestic violence, paedophilia, sexual violence and rape. The author does a skilled job of presenting these as looming threats, not present on the page itself, but happening off screen. Still, readers for whom these are triggers should tread carefully.

Of all the stories, I found "Street Furniture" particularly unpleasant. In this story, a teenage girl trades items of furniture to a goblin in exchange for protection for her brother from her mother's abusive boyfriend. This is perhaps one of the darkest, bleakest stories in the collection, illustrating how poverty and violence can affect multiple generations. It also takes some inspiration from the iconic 80s movie Labyrinth in a way that is not at all rose-tinted.

However, it was the stories with a modicum of hope that were among my favourites. Of them all, "Warabi Mochi" stuck with me the most. This was one of two new stories written for the collection, the other being "Three on a Match". "Warabi Mochi" tells the story of a young Australian woman who has come to Japan to teach English and is struggling to adjust to the culture and make friends. The speculative elements of this story take a little while to kick in and mostly take a backseat to the relationship that develops between Jess and Mieko, the young Japanese woman that co-teaches Jess's classes. The exquisite longing to belong was breathtakingly poignant and really stuck with me.

While I found complex and well-observed characterisation to be a key part of the collection, setting was also a strength. Japan was evoked in two other stories of the collection: from the perspective of a tourist in "Ten Thousand Gates" and from the future in the post-apocalyptic "Traces". Each shows a beautifully contained framework for the story while nevertheless giving the sense of a wider world just out of sight.

The stories set in Australia are just as effective. The opening of "Bullets" had me catching my breath in recognition, as I wager it would for anyone who has lived in close proximity to bushfires, particularly in rural communities. The story goes on to offer some interesting subversions of classic selkie folklore and other animal-wife tales.

"Three on a Match" was another distinctly Australian story, this one showing the claustrophobia of a small town. Life revolves around the pub and achieving escape velocity from this dead-end black hole is harder than it looks. It's a story that taps into toxic relationships, much like "Street Furniture".

Even "Wreck Diving" -- a story not specifically set in Australia -- had recognisable elements; the asteroid miners reminded me of the fly-in-fly-out workers so characteristic of Western Australia (and, no doubt, elsewhere). This Aurealis-winning story was an excellent opening the collection. I very much enjoyed this subtle portrait of a marriage crumbling under the weight of opposing outlooks on life. It perfectly illustrates through events both mundane and extraordinary how cracks present in the start of the relationship widen into an uncrossable chasm. This is not ideal when you're on a space walk through the wreck of a generation ship.

There's something thought-provoking to every story. "2B" is a story about the control of fertility in the hands of a council of men told from the perspective of an infertile woman. "The Last Tiger" subverts ideas about the fragility of the natural world. And the title story uses AI as a lens for examining problematic thinking about whether living creatures can be "fixed" and if that's preferable to creating something new.

If I had one quibble about the collection, it's that a few of the stories end rather ambiguously. However, this is largely a matter of personal taste and in many ways I appreciated that the author didn't feel the need to spoon-feed the reader or wrap everything up in a tidy bow.

Although this is a modest collection in terms of page length, I found myself reading it slowly. There are veins of gold here that deserve to be treasured.

Bonuses: +1 for complex and well-observed characters, +1 for evocative settings.

Penalties: -1 for a few too many ambiguous endings.