Can you break the cycle? 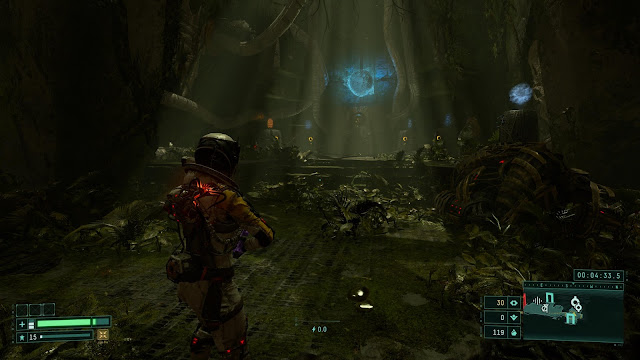 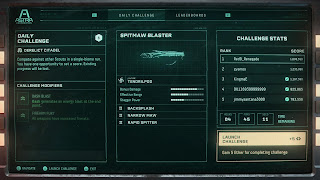 Returnal throws you into its unforgiving world with the promise of a well crafted story. The initial moments made me feel like I was in for some slow cooked, properly placed reveals that would leave me with my jaw agape and hands ready for applause.

The first taste of gameplay reminded me just how great the dualsense is. The haptic feedback is used to its full potential. Each rain drop pitter-patters across your fingertips oh so delicately, making Returnal the best use of the controller’s feature set since Astro’s Playroom. The adaptive triggers are used to good effect, with L2 being multipurpose. Lightly depressing L2 zooms in while a further press will activate alternate fire. This may not sound like much, but in the heat of battle, one less finger movement can be the difference between continuing your run and having to start anew. 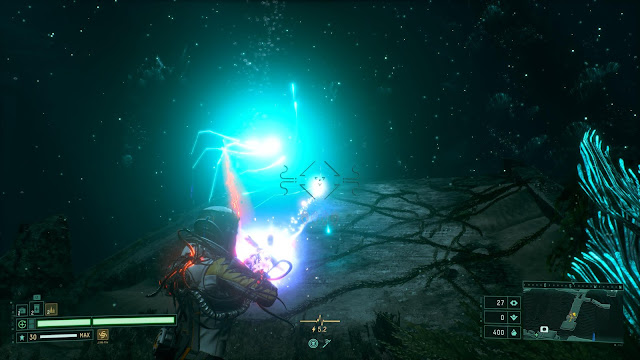 Each gun in Returnal has it's own unique personality. From the shotgun like Spitmaw Blaster to the poisonous single shot Rotgland Lobber, each weapon offers different strategies that can be used for specific situations, though well rounded guns like the Tachyomatic Carbine can be used in every encounter. As I increased my weapon proficiency level, each gun had perks that I could unlock and upgrade by playing with it. This reminded me a lot of the Ratchet and Clank games: a diversified arsenal with strange abilities that can be upgraded through use. The Thermogenic Launcher on full auto almost makes the games easy.

Controlling Selene is a smooth experience. This was an absolute must from Housemarque considering the stakes of each run. The frenetic gameplay demanded well polished controls and the developer delivered. There is a vaulting mechanic (which occurs when Selene reaches an edge that she hasn’t quite cleared) that can sometimes interrupt the flow of the combat. It seems slow when compared to the action all about you and can cost the player their precious adrenaline streak. Any control that leaves the player’s hands, even if briefly, feels like forever in Returnal, especially when vulnerable to enemy fire. 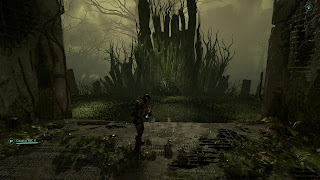 Not only does the game play incredibly well, but looks and sounds fantastic too. The six biomes in the game are varied and detailed while always feeling somewhat fresh due to the nature of procedural placement. The visual effects when in combat, especially the boss battles, are a sight to behold. The bullet hell spectacle is astounding and all runs at a steady frame rate with very few drops throughout my time with the game. The amount of particles and effects on screen at once is impressive.

Along with the stimulating visuals, the audio was a phenomenal accomplishment. 3D audio is applied expertly in Returnal, allowing the player to hear exactly where enemy fire originates as well as the enemy’s proximity to the player. This helped me plan my next move without visual confirmation and got me out of many a tough battle. 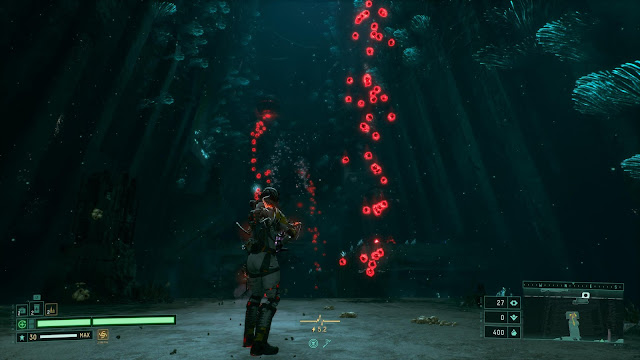 Though I did face some challenge throughout the game, especially in the containment rooms, I never found myself stuck. Returnal didn’t have me restarting very frequently, and only once in my first run of the game did I die to boss. I actually beat the final encounter with no healing consumables and only half a bar of my original health. While the fights are an enjoyable spectacle, the lack of adversity amongst bosses creates a deflated sense of accomplishment. What should have been a relief and a triumph had me thinking, “That was all?”

This isn’t to speak of the enemy designs themselves, many of which feel like they could be found in a Lovecraft tale. While the boss fights were underwhelming—though still exhilarating—the lockdown rooms and containment gates lifted the game high, keeping me on my toes, at peak awareness. Being conscious of Selene’s physical presence isn’t quite as taxing as dissecting her mental state. Each victory gets you closer to a piece of Returnal’s lore, and though the final cutscene had me scratching my head after three acts, I know Housemarque’s deliberate reference to mythos serves a purpose. The names of Greek deities are intertwined with this mysterious narrative. Selene and Helios, gods of the sun and moon, drawing their chariots across the sky in a continuous cycle. It’s this type of storytelling that, while not immediately satisfying, brings me to question every aspect of the story. I have to believe this was the developer’s intention, otherwise any semblance of story falls apart under close inspection.

My time with Returnal was a positive one. Though there were a few issues that reared their ugly heads, like the occasional invisible ceiling enemy or a random sound error (resulting in a loud static burst), they were incredibly rare and were nothing more than momentary annoyances. What the game does best is create a great atmosphere and enticing gameplay, sucking players into Selene’s mysterious adventure—even if you’re not always sure what’s going on. When a game makes me want to go for just one more run at two in the morning, I know the developer must have done something right. Housemarque’s latest is a great game on it’s own, but it’s also a showcase for the potential of this nascent console generation and a solid building block for future triple A rogue-lites.
The Math
Objective Assessment: 8/10
Bonus: +1 for engrossing atmosphere and strong sense of mysticism. +1 for great gameplay.
Penalties: -1 for unclear story beats/ending. -1 for easy bosses.
Nerd Coefficient: 8/10
Posted by: Joe DelFranco - Fiction writer and lover of most things video games. On most days you can find him writing at his favorite spot in the little state of Rhode Island.
Orignally posted at: https://josephdelfranco.wixsite.com/pforp/post/can-you-break-the-cycle
Posted by Joedelfranco at 12:00:00 AM