The reissue of the late John M Ford’s work continues with Scholars of Night, a novel very much of its 1980’s time, and one on the evaporating edges of genre. 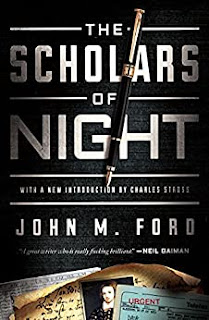 Nicholas Hansard is a professor of history at a college in New England in the early 1980’s.. After the unexpected death of one of his colleagues, he is drawn into a mystery involving cryptography, wargames, espionage and double agents, in England. Oh, and most importantly for Hansard...a lost Christopher Marlowe play.  But Hansard is a minor player in the espionage game himself, a minor outside player who is going to find himself with a more leading role than he can imagine.

This is the story of John M Ford’s The Scholars of Night, a not quite SFF novel now reissued for the first time in decades.

There are two espionage threads and mysteries running through the novel...the lesser, in the time of Marlowe, revolves around the identity of someone in Spain who may or may not be a spy, may or may not be working for Walshingham, may or may not be a double agent. Or even a triple agent!  The parts of the lost Marlowe play that Ford invents for this book feel and read just like the extant real work of Christopher Marlowe, based on the limited sample that I’ve read.

Thus it can be said the Marlowe material, instead of being a full partner in the narrative, is really just a frosting, an addition, a sheen on the major spy narrative.  Or perhaps an inciting incident to provide a rational way to put our protagonist into the main plot.  And it is in this narrative that the meat of the novel unfolds, and shines.

Nicholas Hansard is the classic “semi-outsider to the world of ghosts and shadows” who gets himself in too deep in espionage doings beyond his grade leve; and way over his head, fast. His is the primary narrative, we start with him playing a very Roleplaying infused game of the War of the Roses board game Kingmaker, and from a certain perspective, this is a metaphor for the entire novel, right at the start. He is an outsider, a more powerful piece than he knows or suspects, and while he cannot “win the game” himself (even if he has the fuzziest notion of the Great Game) he certainly can and does influence the outcome. With the two sides of the Great Game seen as York and Lancaster in Kingmaker, and loyalties and who is who always up for play in the narrative, in a way, Ford has written a novel that is to Kingmaker the board game that Chess is to John Brunner’s Squares of the City. There aren’t exact moves, but the theme and flow of the novel follows the internecine machinations of the players.

The other thing to parallel this to in the narrative is also wargames. A lot of the plot runs around modern wargaming on the part of the British navy and just how that fits in with the espionage plot would be telling. Shakespeare may have said all the world’s a stage, but between the Kingmaker and wargaming motifs and plotlines in this novel, Ford is saying all the world is a game. It’s definitely of its time and place as far as technology is concerned. A good touchstone for readers might be Tea with The Black Dragon, which while it does have a more fantastical element than anything this novel has (the titular Dragon), the computer technology and concerns with it are very much in line with what happens in this book. But this is a book that focuses on character, first, with the toys and technology secondary at best. And that starts with Hansard and goes off to the characters as well.

Aside from Hansard, we have a couple of other points of view, including the mysterious WAGNER, who is one of the spies in this drama, but for which side, and what do they want, and who are they, really? WAGNER, throughout the narrative, herself, is trying to figure out who the other code named agents are. It all is of an interesting period piece now, espionage in the 1980’s, in the era of Wargames, particularly. But as far as what to expect, and maybe have a hope of staying ahead of Ford in reading it for the first time, you need to know which espionage writers influenced Ford.

In his introduction, Charles Stross, whose Laundry Files and Merchant Princes novels have borrowed, if not been nearly pastiches of, various espionage novel authors, provides a Rosetta Stone, a cryptography key, to what Ford was doing here.  Ford’s inspiration, model, and some might even say passion is Anthony Price. Anthony Price’s Dr David Audley/Colonel Jack Butler novels are counter espionage thrillers and highly regarded in that genre. I’ve never read any of them, but I know enough about espionage thrillers, both novels and movies, to fit into the plot, characters and story quite well. It is no coincidence that George Smiley (of Tinker Tailor Soldier Spy) gets invoked on more than one occasion.

And that is where ultimately this novel sits. The relatively small amount of Marlowe material, and the speculative fictional material about some of the technology (at the time) isn’t all that much, either. This novel is an espionage thriller written by a SFF author, and so sits on the borders of genre, daring readers to pick it up and engage with it. At the time I think it would feel definitely SFNal, but now its definitely a historical espionage novel in the tradition of, say, Tim Powers DECLARE, but without the Djinn or fantastical elements whatsoever.

Like the other Ford novels I’ve read, he plays fair with his mysteries and revelations, and like the late Gene Wolfe, Ford is a writer to pay attention to what is going on every page. There is an intensity to reading a Ford novel, trying to keep up and figure out his game and what he intends, and have a hope of not being stone-cold surprised at the revelations.  The nuances and small bits, the telling details, attention and thought are the cryptographic keys needed to unlock a Ford novel and The Scholars of Night is no exception.

And there is a joy and a vibrancy and enthusiasm in the novel that is also his signature. There is a lot of fun to be had, lots of subtle and broad humor both. And plenty of heart and character as well. This IS the man who wrote a Star Trek novel as a Gilbert and Sullivan style opera, and he throws that enthusiasm into this spy caper as well. His observations of the preferences of KGB agents, or of two adults trying to figure out a relationship.

So should you read it? I don’t think this is the definitive John Ford novel, but then, figuring out what THAT is could be an entire essay in and of itself. I don’t think it is his best work, but a man who liked to write in every genre and subgenre he came in contact with, its a good work in Espionage/Thrillers. I would say that if you have read a John Ford novel already and want more now that they are being re-released, yes, get this one too if you have the mildest interest in Espionage fiction.  Should this be your FIRST John Ford novel?  If you like Espionage thrillers and want to see what the “fuss” is all about Ford’s work, get this book. If Espionage thrillers leave you cold, if James Bond and George Smiley are not your cup of tea (the plotting and feel here is definitely of its time, and not of contemporary Espionage thrillers), then this book can wait for you to get hooked on Ford’s work through one of the other gems in the brilliant constellation of his work, every star unique, and different.

Bonuses: +1 fo the joy of a newly re-released of a John Ford novel

+1 for excellent use of theme in this novel, a levelling up of the writer's talents and skill

Penalties: -1  Needed a tad more Marlowe stuff, it really is a veneer to the novel rather than a richly integral part.