That's no moon, and that's barely a movie, either 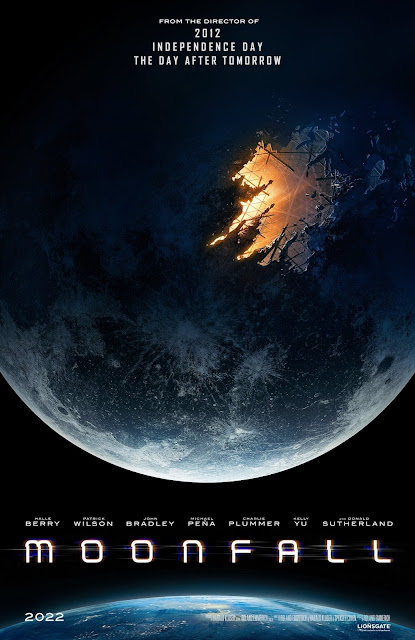 First, let's get the boring physics out of the way: although it's not technically impossible that the Moon could be an artificial structure, the notion that it could harbor a white dwarf star inside it is beyond laughable. The lightest viable dwarf stars have a mass, and therefore a gravity, around one-half of our Sun. If we had one in our backyard, we'd definitely have noticed.

However, the intention of Moonfall is not to make sense. It's to provide thrills, spectacle, great action, a good time. And it fails at that, too.

The plot of Moonfall starts in 2011, when astronaut Brian Harper witnesses the mysterious death of a colleague during a space mission, only to be blamed for it, publicly disgraced, and pushed to the brink of destitution. However, what he thinks he saw (an angry mass of gray goo emerging from a lunar crater) turns out to be real: annoying conspiracy theorist KC Houseman, whose second job is sneaking into university offices to steal astronomical data, has found evidence that the Moon has shifted its trajectory. Meanwhile, the members of an emergency mission launched by NASA to investigate the changes happening to the Moon are eaten alive by the gray goo, only this time it happens on camera, so Harper's estranged former colleague Jocinda Fowler finally believes him. It's time to send another mission to the Moon before its new orbit causes chaos on Earth.

The entire planet is vulnerable to the rising gravity of the approaching Moon, but the movie doesn't do a good job of conveying the sense of danger. The human cost of the cataclysm is confined to TV newscasts; if the characters are already removed from those events by the screen they're watching, then we, who watch them watch the TV, are kept at one additional remove from them. That's not an effective way to make the end of the world matter to the story. The only characters we follow on Earth are those immediately related to our heroes, which means they may as well carry a sign on their foreheads that says Designated Survivors. Their desperate escape from armed looters and falling meteorites carries zero tension because we already know this isn't the kind of movie that will let named relatives die.

Of course, everyone else on the planet is fair game for the digital maelstrom of crumbling earth and rising waves and falling chunks of lunar rock. Director Roland Emmerich is by now well experienced in tearing the world apart, so we're treated with serviceable shots of entire cities being wiped from the map. The director knows that's what we came for, and he delivers.

When Moonfall stops blowing stuff up and remembers to be about something, it's about parental sacrifice. On the grand scale, the alien ancestors of humankind gave up their corporeal existence to give us a chance to survive; on the personal scale, parents risk their lives at various moments in the story to keep their children safe. However, it frequently feels as if the movie deemed it indispensable to pair this theme to a disturbingly conservative worldview. This is the curiously specific kind of crisis where turning on your cell phone will get you killed, the world is saved by spaceships and spacesuits that are literal museum pieces, the future of the nation lies in abandoning the coasts and retreating to the heartland, the only hero capable of doing the job is the millionth iteration of the retired guy who has to be coaxed out of retirement, divorce is a Bad Thing that Makes Everyone Sad, the final lesson for humanity is along the lines of "respect your elders," the efforts of parents give their kids the (literal) extra lift they need to solve their problems, and the protagonist's son has an entire arc about evading legal consequences for his irresponsible behavior and growing into the mythical Good Guy with a Gun.

These plot points sound more organized when laid out like this. On the screen, the first and second acts suffer from a wildly irregular pacing, their scenes joined without a discernible sense of intention. The random jumps between subplots get a bit better as the story progresses, but that first impression of aimless editing doesn't fade from memory. After we get to the pretty decent visual effects used for the alien spacecraft in the third act, it's hard to justify why early scenes of a more mundane nature resorted to a less competently executed and more painfully obvious green screen. What does retain a uniform standard throughout the movie is the stilted style of dialogue that no real human being has ever uttered.

The most jarring problem with Moonfall is how openly uninterested it is in having an original story to offer. Not only is the destruction of cities interchangeable with the destruction of any other city in any other big disaster movie; the epic ending is a mashup of plot beats shamelessly stolen from the endings of 2001, Mission to Mars, Armageddon, Wrath of Khan and Independence Day. When you approach the end of this movie, you know exactly how it's going to resolve, what the next shot is going to show, even what trite line the hero is just about to say. And Houseman... Houseman is an entire problem in himself. He's a walking provider of unnecessary commentary, the most irritating exemplar of an era of cinema that seems to be cursed with characters made entirely of quippy one-liners.

For all its world-spanning scale and astronomical stakes, Moonfall offers a largely forgettable story, built from a barebones approach to dramatic effect. This is a movie that says it's about humanity earning a second chance, but it has no intention of doing anything new with it.

Penalties: −1 for the criminal waste of Donald Sutherland, −1 for the entire character of KC Houseman.