The Green Man's Silence continues the story of Daniel Mackmain, changing up him, and the entire series. 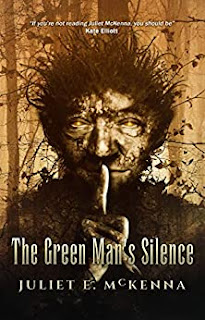 When last we left Daniel Mackmain, things had been looking up for him. After his adventures in the Cotswolds, he has a sort of relationship going with Finele, the swan may he met on his adventure there. Now, visiting her and her family back in their coastal home, Daniel finds that a new problem affects them--and him. An entitled heir is riling up the supernatural denizens of the Fens, with doubtless no good purpose. And the Green Man, Daniel’s patron, is mum on the matter. Loner Daniel is going to have to forge new relationships to face this latest problem.

As the series has progressed, from The Green Man’s Heir  through The Green Man’s Foe, and now to The Green Man’s Silence, McKenna has been expanding the sphere of her urban(rural) fantasy verse. More lore about the supernatural universe. More about Daniel’s history and background. Building on previous episodes to enrich the relationships and worlds that Daniel finds himself in. As the son of a mortal man and a dryad, and the agent of a mysterious entity known as the titular Green Man, we have a protagonist who has one foot in our world and the other foot, as the series progresses, crosses more and more into the supernatural world.

Take this third book, The Green Man’s Silence, as illustration. In the first book, Daniel starts off gamely enough as his mother’s son, but living a most regular life otherwise, until events push him into the supernatural outside of the context of his mother. He steps further into the borderlands of faerie, as it were, but its clear that while he knows more than the average person, he is still way in over his head. By this book, Daniel’s ties to the supernatural have gotten deeper and more permanent.It’s not just his burgeoning relationship with Finele, although associating with her and her family (many of whom are of her swan man nature) but it is also the base assumptions and the water that he swims in is significantly more supernaturally aspected and focused.

That is a strength, and perhaps for some readers, a mild drawback of the book. This book amps up the supernatural lore, plotting and ties significantly. There are many more moving parts to the supernatural world and Daniel, and us, get meshed in with those as he struggles to deal with the problems Finele and her family are having with the local would-be-magician causing problems for them and for the rest of the local supernatural population. The choice to, as the title suggests, keep the Green Man offstage paradoxically gives the author room to introduce a lot of other elements and powers within the supernatural realm for Daniel to negotiate with. These entanglements in order to deal with the antagonist do complicate the narrative.

In a sense, too, they also crowd out the villain a bit. Although in the previous books, the antagonists do not take large swaths of pages, the focus on Daniel meaning necessarily that they do not appear over much, in this third novel especially, the would-be magician really is offstage for good rafts of the book, personally. His actions and effects are outsized, and are always a threat, but this is a novel where his actual presence on screen, as it were is a little more limited. I don’t know if this novel heralds a tonal and textual shift in the series, and I will be curious as to where The Green Man’s Challenge goes in this regard.

One thing is clear though, and that McKenna is not content to simply repeat the formula of the first book and just come out with christmas cookie cutter shaped narratives of Daniel’s story in different settings. As he gets ever deeper into the woods (or the fens, if you take Finele’s perspective) of supernatural doings, the author is willing to make changes to how the stories run, and what Daniel has to deal with. This book, then, after the first two, feels like some of a very transitional book, or one might say, given its setting, it’s a Esturarial book--a book sitting in the in-between zones of two different worlds. I know a bit about estuaries from my college days--Estauries are between the sea and the land, between salt and fresh, a zone ever and always changing, with inhabitants who are only successful if they are ready to adapt to that change. But estuaries, for all that, are some of the most fecund regions on the globe, rich places for life to develop.

So, too, is the richness of this book. It’s a transitional book, its a book where the text, the plot and narrative, the worldbuilding and yes the main character himself is in this borderland and liminal space, and it is richer for all of it. Daniel building a real relationship with someone who is not his Mom and Dad and navigating that space. The wealth and welter of supernatural creatures and their relationships with each other. The sense of place that the Fens, our third locale in this series, provides, especially showing how deep the history of the area really goes.

I look forward to the next book to see where McKenna continues to go with Daniel and his ever changing world.

Bonuses: +1 for a rich estuary of character and worldbuilding as she changes up Daniel and his narrative

Penalties: -1 The novel is definitely a gear shift, and readers new to the series will not find traction here.