The second book in the Green Man series deepens and broadens the otherworldly adventures of a Dryad’s son. 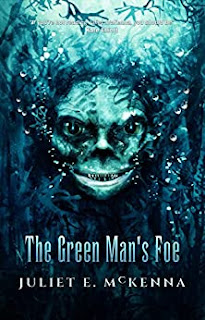 Being mortal, but also the son of an otherworldly being isn’t all that it is cracked up to be. Ask Daniel Mackmain. After dealing with a threat to a wood and coming in contact with a very powerful supernatural entity, the titular Green Man, it is no wonder that his success in dealing with a rather nasty problem (that had some unfortunate consequences for him with the press and with the police) has resulted in the Green Man calling him on again.  At a new construction  job site in the lovely Cotswolds, a mysterious figure seems to be influencing the local kids...and trying to get into the job site Daniel has been hired for. But what is he after? And why?

This is the second story of Daniel Mackmain, The Green Man’s Foe.

McKenna tackles this in a number of ways. Crucially, her writing style and format lends itself to readers starting the narrative here as easily as in the first novel. You don’t need to have read The Green Man’s Heir or remember it well in order to pick this one up and go with it: McKenna layers in everything you need to know about Daniel, his nature, his heritage and role and his capabilities. We get mentions and some discussions of the previous novel, and we do get some touchbacks to his mother and father but this novel leaps forward. Although we get a character besides his family recur from the first novel, this one is in a new location, a new situation and a new problem for Daniel, so deep knowledge of the terrain is not needed and one can launch themselves into this Cotswolds adventure without missing much from the first novel.

The relatively mortal nature of the protagonist also lends to the serial nature of the story and allows for readers to pick up the story here, if they so wish, and launch themselves into Daniel’s latest adventure as their first. He has knowledge and ties to the supernatural, but he is very mortal, and as such he has to rely on his very mortal skills, luck, and determination to see him through than what might be considered more traditional Urban (Rural?) Fantasy tropes and powers. You don’t need a catalog of Daniel’s magical abilities, because aside from being able to see Dryads, Nixies and the like, there really aren’t any.  This allows the author to focus on more low powered action and character, immersive setting and excellent plotting, which are her strengths from other books in any event.

So what does happen here? Daniel gets a job overseeing the renovation of an estate, Brightwell House, into an estate in the lovely Cotswolds, a region of England I’ve only seen in pictures (it also happens to be the home turf of the author, and the writing shows that). The immersive writing, a style that had me wondering if Blithehurst House in the first novel was real (it is not), really suits McKenna here, as she brings Brightwell House and the Cotswolds to life. A drifter is nearby, though, doing *something* with the local disaffected youth, and the Green Man did convince him to take the job with dreams of the place. So a chunk of the novel has Daniel trying to figure out the supernatural nature of the problem. The drifter and his bad influence on the local youth and their habits seems straightforward enough--but how that ties into the supernatural and what Daniel has to do is part of the mystery and joy of discovery in this book. There are definite reasons why Daniel is involved in matters by the Green Man, and we get some more exploration of the supernatural world that Daniel has more than a foot in at this stage.

The book also introduces a secondary character that is going to, based on descriptions of subsequent novels, become more important in future books: Finele Wicken. Finele is more explicitly a supernatural being than Daniel is. She is a swanmay, able to change into a swan, as can all the members of her family. She’s also a ecologist specializing in wetlands and water (a suitably modern job for such a being).  Finele is not the “love interest” in any facile sense, she has her own agenda and perspective, and is something of a “Consultant” in the matters.

This novel does start raising issues not really explored in the first novel, and Finele’s intersection with Daniel does bring to life his often lonely nature. We really get a good sense here, even more than the first novel, how much Daniel keeps people at an arm’s length, especially romantic entanglements. His nature (not really a power but he does have a degree of supernatural charm), and the nature of his mother means that bringing home girlfriends to Mother is something Daniel doesn’t have a lot of experience with ,and there is a pathos to that isolation of a lonely life that I felt resonant with my own. Connecting him with Finele here, in this novel, is a good character development, then, so the same beats aren’t endlessly repeated.

Given the rich characters, the worldbuilding and rotating settings, it is no wonder that there is a lot of runway for McKenna to continue to explore Daniel and his supernatural heritage and world, and this novel very successfully builds on the first, provides an onramp for new readers and provides superstructure and scaffolding for future books in the series. If you like the ruralistic urban fantasies of, say, Alex Bledsoe, or Paul Cornell, The Green Man’s series is definitely the cup of tea that you want to give a try.  I look forward to continuing to read and see where the series progresses.

Bonuses: +1 for excellent characters and worldbuilding

+1 for making it very accessible for new readers

Penalties: -1  Some of the elements of the mystery solving felt a little repetitive.