The culmination of a long and satisfying journey. 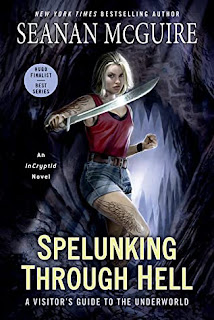 Friends. Spelunking Through Hell is a JOURNEY. A literal one for the plotline of the novel as Alice does, in fact, go on a journey to find / recover her long missing husband Thomas and bring him back to the mortal realm. But, also, a deeply emotional journey. Spelunking Through Hell is the culmination of the previous eleven novels that set up everything we need for this novel to feel as earned as it does.

I wouldn’t normally think to quote the acknowledgements page in talking about a novel, but I’ve known for a while that this is the book Seanan McGuire has built entire Incryptid series up to and she puts it far better than I could.

“Here we go again, and finally. You see, Spelunking Through Hell was literally the book I used to pitch this series in the first place and everything since then has been one long con to convince you all to care about this vaguely disturbed, definitely damaged woman and her wild, possibly futile search for the man she lost fifty years before. Alice came before everything else.”

You *could* go into this book cold and enjoy and appreciate Spelunking Through Hell. Seanan McGuire is really, really good at setting up the beginning of a novel with just enough recap and context to pull the reader along. I just wouldn’t know what that looks like because I’ve hooked on this series since book one and I’ve read all of McGuire’s Incryptid stories on Patreon that’s been filling in the family history up through Alice and Thomas. I can’t get my mind in the place to understand what cold reading would look like. I’m invested.

Throughout the series Seanan McGuire has been seeding the idea of Alice Price-Healy. She is referenced by the current generation almost as a legend, but they know that Alice is still around and searching for her husband, Thomas. The current generation, Verity, Alex, and Antimony, are grown. Alice is their grandmother. Thomas has been lost for more than fifty years - except Alice looks like she is the same age as her grandkids because magic and mystic quests. Spelunking Through Hell gets into it (and uses the worse “flense” far more often than one would expect).

We also actively meet Alice in the novel Chaos Choreography and in the bonus short story “Follow the Lady” that is included with the novel Imaginary Numbers.

There’s a point to this - which is that the legend of Alice and Thomas is a founding principle of the Incryptid series and of the Healy / Price family. Thomas didn’t die, he was lost. Readers of the short stories know that he made a deal with the Crossroads to save Alice’s life. In the opening chapter of Spelunking Through Hell we see the Crossroads come collect.

Alice has spent the rest of her life searching for Thomas. *She* knows that he isn’t dead, even if nobody else does. And when Antimony destroys the Crossroads in That Ain’t Witchcraft (spoilers, but what are you really here for?) that finally opens the very real possibility that Alice will find Thomas. She doesn’t have anything else except her quest. Not really.

“Until one day I’d looked around and realized the only real anchors I had left were a dead girl, a house that wasn’t mine, a forest that loved me, and a colony of talking mice.”

Spelunking Through Hell is a quest story, an adventure across multiple worlds and dimensions and we see just how much of a bad ass Alice Healy-Price is and has become, as well as how much this obsession has cost her.

“There’s only so much pain the mind can process before it starts shutting things down, and while the liquid I hung suspended in was designed to keep me from slipping into shock and dying from the sheer intensity of it all, it was impossible for them to deaden my nerves enough to keep the removal of my skin from being the worst thing I had ever experienced”

For the most part, Seanan McGuire’s novels never approach being true horror (she writes as Mira Grant to get closer to that). McGuire has such a light touch with her prose and she seldom lingers on the details, but damn, she can really turn an image when she wants to. This is a novel where she wants to.

For me, Spelunking Through Hells works because Seanan McGuire is a phenomenal storyteller and she has spent the previous ten novels earning my trust. With each book she introduces just a little bit more until we get to Antimony destroying what seems like a fundamental part of the world and Sarah Zellaby moving between worlds and dimensions. Spelunking Through Hell perhaps does not work nearly so well if it is the second novel in the series because what it does is such a leap from the smaller ideas of “supernatural” creatures being real things in our world and a family studying and protecting against those who would kill them simply for existing. Getting from there to here is a journey itself. Earning that journey is something else. McGuire does.


The MathBaseline Assessment: 8/10Bonuses: +1 for paying off the Alice / Thomas story in such a satisfying way.Penalties: -1 because I'm not sure the whole "Visitors Guide to the Underworld" subtitle paid off, which is absolutely small potatoesNerd Coefficient: 8/10, "well worth your time and attention" See more about our scoring system here.Reference: McGuire, Seanan. Spelunking Through Hell [DAW, 2022]