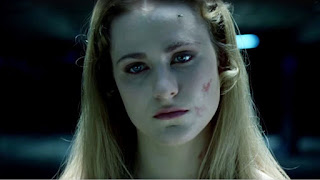 It's hard to know where to start with the Season 3 finale - I usually watch each episode a couple times before/during writing these. I don't like knee-jerk reactions to them, and as I've said before, I don't want this to just be another recap. You can find those anywhere. We earn our perpetual Hugo silver medal, thank you very much.

This probably isn't the post that puts us over the hump, but damn if the season didn't end with a bang. Literally, anyway, but the flavor of the episode was much more in line with the season. It sort of... happened. There are a lot of people unhappy about that, and several other things. Delores apparently changing her worldview, William being killed post-credits - but I think there are a few important things there.

First of all, anyone worried about William's death are forgetting last seasons post-credits scene, that is obviously in the future, with zombie-William undergoing 'fidelity' test, so my money is on a really good chunk of Season 4 taking place decades in the future - As Bernard waking up covered in dust seems to indicate.

Which is, to me, what this season was - a bridge. Lacking was much of the mystery of the first couple seasons, when we find out Bernard is a host, William is the Man in Black and time is a plaything. By jumping ahead with at least a portion of the show, they will be able to re-introduce a lot of the things that seemed lacking. The show just had to get there, so in a way season 3 just takes up space - but space that must be occupied.

The million-dollar question is what becomes of Delores. Her memory is wiped and she seems completely dead. From a meta standpoint, it will be interesting to see how that is handled - Delores is the heart of the show. I would doubt she is gone from the show, though - which brings us full-circle to last week's topic, and one at the core of the show - memory. It's the loss of her memories that damn her - as a host, as long as she has those, she can be put into a new body with relative ease.

It was the hosts gaining access to their memories - real ones, not backstory - that lead to their achieving consciousness in the first place, so Delores losing hers is an apt symbol for her death. Will it make her a martyr to other hosts - especially if Bernard retrieves the other hosts. Speaking of full circle, William is now a host - but only the Man in Black portion of him, which is now all of him. What memories does he have? He would clearly have access to Young William, who was much more caring and less violent, but as we well know, violent delights have violent ends and MiB certainly delighted in violence.

All in all, an interesting if not flawless turn for a show that has abandoned is eponymous park. It's been a blast to write about, and I plan on doing so again for season 4.