Providence largely centers on inaction, yet manages to feel more propulsive than most space operas. 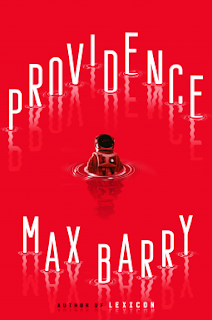 When people think of space operas, some of the staples they envision are blinding lights and explosions amidst expansive space, in which what lies ahead holds near infinite possibilities and liberty. It’s a subgenre in which the reader feels unshackled by terrestrial rules and limits. Providence is not that kind of space opera. It juxtaposes the vastness of space with constriction by positing that many of the things the cast of voyaging characters do is predetermined. That their choices, however idiosyncratic and nuanced they can be, are not exactly their independent concoction. The characters can be seen as puppets, and if they explore too far along the grandeur of space, their strings pull them back.

Providence follows four people who are enlisted to be on a powerful, AI-controlled ship, called a Providence to defeat a group of aliens nicknamed the salamanders, who through a damning, murderous video that shows their ill intent, has become anathema to humanity. The cast of characters are Anders, a reckless, rebellious type—Beanfield, an incredibly emotionally astute and conciliatory person—Gilly, the most scientific and technical of the bunch--and Jackson, the officer who exudes importance and dignity, but has flaws laying beneath.

Seems like a good enough motley crew to work together and kick alien butt, right? Not quite. Unfortunately, they have no control over the Providence. Instead, just like some people believe divine providence dictates how we act, this Providence ship dictates how it vanquishes enemies and jumps to different locations, controlling the trajectory of the humans on board the ship, whether they like it or not. The people aboard are merely faces to attribute to the mission—a dash of personality to add human elements for the people watching their video feed from Earth, to what is really a clinical operation.

Max Barry has done a tricky feat in Providence. It could be so easy for a book about people who are aboard a ship with little agency to have stagnancy and lethargy. But while the militaristic actions of the humans throughout most of the book are static, their interpersonal relationships are dynamic. Whether it’s the relationship between Anders’ heady and boisterous personality locking heads with Jackson’s want to keep order and decorum, or all of the characters opening up to Beanfield who bears an interestingly strong ability to tap into the substratum of people’s souls. Despite how feeble humanity’s power looks throughout a large part of the book, the story is also a rallying cry for how humanity might not have complete dominance over more powerful beings, but they are at least more fascinating than them. And this dynamism that's exhibited from the characters sets the book to be all the more powerful, once the foundation is shaken and some of their constrictions are released.

If there’s a complaint to be made, it’s that even though the book has a unique underlying theme, outlining the basic plot sounds really mundane. Most of the hard-hitting events are in the smaller moments of the book, while the intermittent space battles feel like typical space opera fare, no matter how well-written those sequences are. The action carries more weight in the latter part of the book, once the plot shakes up a bit, but still doesn't reach the highs of the intimate moments. But maybe it’s appropriate that these people struggling to break out of their preordained limits are trapped in a story that's constrictive template and limits bear many similarities to the sci-fi of yore.

Providence shouldn’t work. It has well-trodden tropes, and periods of purposeful inaction and ennui. But the characters that pop out of the screen, writing that’s unceasingly clear and incisive, and a theme that wraps around the tropes to give it a veneer of distinctiveness, makes it something well-worth reading. It’s a novel that has the best sci-fi has to offer—positing thought-provoking questions, without falling into the pitfalls of having cardboard characters and overly descriptive technical jargon. Max Barry has proven that he knows what he’s doing.

Bonuses: +1 There shouldn’t be a strong whiff of freshness to this kind of story, but this book manages it.
+1 The science is laid out descriptively without ever halting the momentum of the writing.

Posted by: Sean Dowie - Screenwriter, stand-up comedian, lover of all books that make him nod his head and say, "Neat!"
Reference: Barry, Max. Providence [Hodder & Stoughton 2020]
Posted by Sean D at 12:00:00 AM