Microreview [book] The Book of Dragons Edited by Jonathan Strahan

The Book of Dragons by Jonathan Strahan fuses together his strong and abiding editorial eye with the talents of numerous luminaries in fantasy, complimented by Rovina Cai’s stunning art. 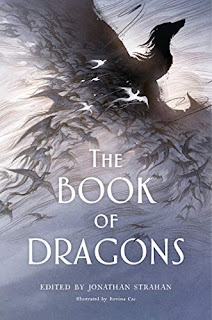 Dragons. It had to be Dragons. After numerous anthologies, especially Science Fictional oriented ones such as his Infinity Project series, and his Best of the Year anthologies, in The Book of Dragons, Strahan turns his focus to a fantasy heavy focused anthology with the classic of all fantasy creatures, the Dragon.

The lineup of the anthology is a highlight of some of the best authors in SFF today, with the anthology featuring both poetry and stories.

The bracketing of the anthology, bringing us in and taking us out with a poem, really shows the commitment of the anthologist to making the poetry the equal to the fiction in the anthology. There has been a rising tendency toward this in some quarters of the SFF world, and this anthology lays claim to being part of that trend. My own experience with SFFnal poetry is limited. That said I enjoyed the poetry on offer here.

As far as the stories, go, as always with an anthology  even with the top tier authors of the day in it, some stories worked wonderfully for me, some were all right, and some stories did not work for me at all. I was delighted by the wide range of themes, and use of Dragons in the anthology, in a surprising to me number of contexts. There are fewer traditional uses of dragons than I was expecting, and I think that is a strength and a testament to the authors and the anthologist rather than a drawback. It is worth noting though for readers who are hoping for a more straightforward approach to the topic from the anthologized authors.

Out of the set of stories, I had a few favorites that I think represent the best of what the anthology has to offer.

Michael Swanwick’s “Dragon Slayer” is a lovely twisty story, and wonderfully evocative piece that also has a delightful time travel element embedded in it. Aliette de Bodard’s “The Last Hunt” takes place in the same verse as her “In the Vanishers’ Palace”, once again featuring the Dragon Vu Con, but set long before the events of that prior story, giving us a glimpse into the past of her devastated post apocalyptic world. Kate Elliott’s “The Long Walk” hits upon some familiar themes and topics I’ve come to expect and hope for in her fiction--the role of women in society, how that role might be shaped, changed, and subverted by characters who are unwilling to accept an unjust state of affairs. Her main character Asvi shines out like a beacon and takes her place among her many other outstanding characters. Scott Lynch’s “Maybe Just Go Up There and Talk to it” felt really resonant in an age of limited supplies to fight the global pandemic, as towns, cities, states and the country fight a rearguard and often diminishing action against the return or just plain eruption of Dragons into the modern world. Kelly Robson’s “La Vitesse” features the appearance of Dragons in the Canadian Rockies, and the most metal schoolbus chase I’ve ever read in fiction. Patricia McKillip brings her poetic and evocative pen to life in a magical educational setting in her story "Camouflage".

Other stories take Dragons in all sorts of directions, ranging from Dragons with colony collapse syndrome to Dragons on extraterrestrial worlds.

I do encourage you to pick up this volume, because, as I keep harping on, the wide range of stories really goes give a lot entry points and stories to love for a wide variety of readers.


And I have to say that the pencil style artwork by Rovina Cai is wonderful. Not only is the cover art arresting to look at, but there are plenty of line drawings within the volume itself that bring visual appeal to the reader. That said, this artwork is something that is lost in electronic versions of the book, which is a real shame.

So, Mr. Strahan,now that you’ve conquered Dragons how about an anthology of other Fantastical Beasts. Griffins, Medusae, Rukhs, and more need your editorial eye, too!

Bonuses: +1 for an excellent set of authors, both on the poetry and fictional fronts
+1 for a strong use of art in the anthology that makes this much more appealing in physical rather than electronic form.

Penalties: -1 As always with an anthology, the wide rangeness of the anthology means that some stories are going to work much less well for a reader than others.