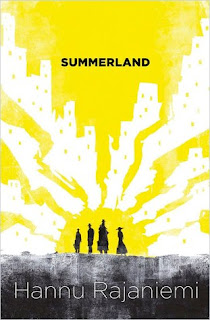 At this point, Hannu Rajaniemi's latest novel Summerland from 2018 is not exactly new anymore, but I guess nobody is going to keep me from reviewing it here. It is still a great book and as good a place to getting started with his work as any — maybe even a better one than his highly praised debut trilogy (The Quantum Thief 2010 / The Fractal Prince 2012 / The Causal Angel 2014) of cutting edge SF if occasional intense carpet bombing of science-y concepts can put you off.

A fantasy espionage novel entertaining almost as-unscientific-as-you-can-get spiritualist ideas about souls, aether and ectoplasm first looks like a nice opposite of Rajaniemi's previous work but the first impression starts to fade once the narrative really gets going. It turns out that the unscience-y concepts can very well be explored in a rigorous way, but the overall feel of the narrative is lighter when we are not in space (which somehow seems like a serious place) and the ideas are so ridiculous. However, Rajaniemi's tone is so science-y that I actually almost waited for a revelation on the last few pages that all the characters were in fact some kind of digital consciousnesses or AIs inside a bizarre simulation. That didn't come, though, which is probably for the best.

Summerland is something of an intelligence agency procedural situated in the alternative thirties when there's life after death. In addition to much of the corporeal world, the British empire has colonised the afterlife — or an afterlife — and Queen Victoria keeps reigning from beyond the grave, or from Summer Court as Summerland puts it. In the world of the living, the British intelligence operatives work in the Winter Court, and these two agencies are locked in a bureaucratic power struggle as the British empire as a whole is engaged in conflict with the Soviet Union in Spanish Civil War and elsewhere in cold war style. This is probably quite a crude oversimplification of a very complex and intriguing setting which sort of makes sense when you're reading the book, but it's not easy to explain afterwards.

The novel kicks off as Winter Court officer Rachel White has to work hard to keep a Russian defector alive and learns of a communist double agent in the Summer Court. Because of workplace politics and the "Etonian boy-children" running the intelligence apparatus, she has to go rogue in order to hunt the mole. The double agent she is after is the other viewpoint character of the novel, and it's a shame that his chapters don't hold the interest quite as well. His personal history through Cambridge and into the Russians' arms is all cleverly constructed but he does not come to life as Rachel. Well, to be fair, he is dead, but I wasn't compelled to get under his skin (which he doesn't have anymore) in the same way.

He is needed for laying out how the afterlife business actually operates in the novel, though. There's not one afterlife but many. Each government has their own version of it and by granting Tickets they mandate who are going to have a permament place there after death. From there, the ghosts can communicate with the living through mediums and devices called ectophones. The Soviet afterlife is a Communist hive-mind called Presence through which the ghost of Lenin is still calling the shots — in the novel, his real-life successor Stalin is a fringe dissident working undercover in Spain, fighting the Soviet Union and attempting to make death final again.

Many of the novel's characters are borrowed from actual espionage history. Kim Philby, Guy Burgess, Anthony Blunt, Richard Brooman-White, Mikhail Shpiegelglass, Józef Unszlicht and others have lived on our world as well, but I'm not quite certain why Rajaniemi has decided to use all these people. If there is some meta-level meaning one should draw from this gallery of quite obscure personalities other than just have an alternative history populated with real people, I missed it. The British prime minister is Lovecraftian Herbert West himself, so there's also some attempt at metatextual fun but for me the novel would have worked better if Rajaniemi had sticked to all the weird ideas and maybe even gone a bit further with the ectotechnology and the concept of alternative afterlives instead of throwing all these references around.

All in all, it's a solidly weird novel packed with enjoyable, curious stuff and I liked it.

Penalties: -1 for unnecessary (or too hard to decipher) references

Nerd Coefficient: 8/10 – "well worth your time and attention"