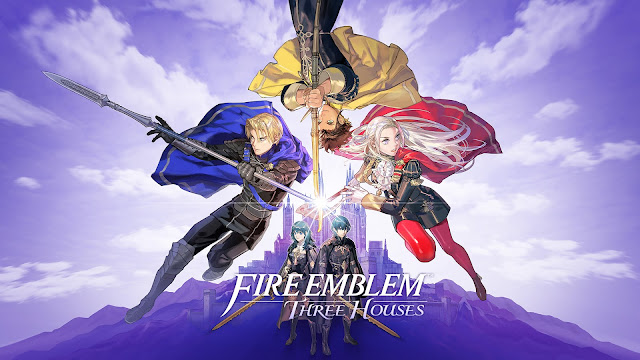 My first playthrough of Fire Emblem: Three Houses, the latest edition in the long-running tactical JRPG saga, involved what,  it seems to be agreed, is the most boring route of this complicated branching story. I started off following my gut instincts in the game's initial choices, and quickly realised I was on the most complicated moral pathway. Trying to keep myself as unspoiled as possible while also figuring out how to avoid locking myself into 40 hours of lawful evil misery, when faced with an (admittedly extremely signposted) choice to that effect, I took a deep breath and broke away from the character who asked me. When you do so, the game switches into a narrative that takes you away from the tried-and-tested Fire Emblem strategy of being the silent strategist to a protagonist Lord and into something else. The second act of Three Houses that I first experienced was emptier, but at the same time more centred on me and my remaining crew of misfits, who have now defected from their own homeland, and about how I fit into a mystery that I barely had a grip on even before the whole thing went pear-shaped. Battles between ancient gods, mysterious ageless allies and their hidden inhuman enemies, the rise and fall of magical dynasties supported by hereditary "crests", political schisms and massacres, and, of course, a cool magical sword? It's all a ride, and the sense that other events and tragedies were playing out with the rest of the students was enough to hook me in for another run. And then another, and, well, here we are at the beginning of route 4 and I still can't say I'm close to done with this fragmented adventure of an RPG. 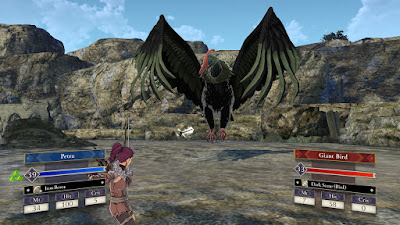 Fire Emblem puts you in the shoes of a mysterious mercenary with little memory of their past, and apparently not a lot of perspective on how weird that is. After they and their father have a chance meeting with three young people being chased by mercenaries, Byleth (to give them their default name) ends up travelling back to Garreg Mach monastery, home of the head church of the continent of Fodlan and site of an officer's academy which trains elites from the continent's three rival political forces. As soon as Byleth arrives, they are inexplicably appointed to a vacant professor position and asked to choose one of the school's three classes - each linked to a different country - and to guide the endearingly unbalanced group of nobles and prodigies through their education. In combat terms, this plays out basically the same as the eight-six Fire Emblem games before it, though with some evolution in how the class system works to account for the fact that this is magic school, and your students can be whoever they want to be (as long as they want to be, uh, child soldiers). Between battles, you roam the grounds of the monastery talking to people, fishing (ugh), lining up endless matchmaking lunches, entering tournaments and going on (thankfully very chaste) sauna dates all so the kids can get better at fighting. And, unless you find yourself on the church route, you'll also grow closer to the leader of your house and aligning with their goals: Edelgard, the driven and talented heir to an ancient empire; Dimitri, orphaned prince seeking answers to the events which killed his family; and Claude, laidback schemey boi with a mysterious past. In the game's first act, a general camraderie exists between all the houses, but a war is brewing and by the time this erupts in the second act, things between Edelgard, Dimitri and Claude are rather different.

The Lords might be the drivers of the biggest plot action, but beyond them there's a whole cast of kids with a myriad of personal disasters and dysfunctions going on, many of which initially stem from the ridiculous pressures of being nobles in a declining hereditary magic caste, and from the trauma of getting pulled into increasing conflict across the continent. Some of the biggest surprises were the characters whose initial personality traits were most annoying: who would have thought this would be the game that got me invested in the incurable skirt-chaser, or the lazy one who won't help out unless it aligns with their goals? In standard Fire Emblem fashion, you get to know your students through their opening up to Byleth and their fellow classmates via "supports", where standing next to each other in battle and going on the aforementioned lunch dates and sauna visits builds bonds between characters that make them better at killing things. Off the field, getting support levels unlocks support conversations, which can be anything from ridiculous slapstick to emotional confessions and even plot-enriching nuggets of information about the characters and their lives. This, my friends, is where the relentless shipping begins, and if you're actively pursuing support conversations then the endgame will become an outright parade of characters expressing their undying devotion to one another as they grow close and begin to make plans for their lives after the war.

As I noted, the route I picked meant I knew very little about some of the characters, especially the house leaders: I had picked up on some of the inner motivations of Edelgard, but very little concrete information about why she made the alliances she did and what her end goal was for the Adrestian Empire. Dimitri and Claude remained near total unknowns, and the inner politics of their countries generally a mystery. Key issues in the first half of the game, such as the identity of the Death Knight who shows up as a terrifyingly overpowered enemy who only attacks if you attack him first, remained beyond my grasp. Instead, the game kept me hooked based on the the personalities and the growth of the students I had at my command, particularly those who had defected from their homeland and were now horrified at the prospect of going up against their old allies, as well as some of those I had pulled from their respective houses in gentler times and who now found themselves leaving their old leaders behind to follow me, the inexplicably charismatic former "professor". It was, in short, a route that let me care exclusively about the little guys on my team, and put their choices and trust at the heart of the decisions I took.

The fact that Fire Emblem all but requires multiple playthroughs to gain any hold on its events, and the diverging timelines that come with those playthroughs, means that Three Houses laughs in the face of canon interpretation, even on an individual level. The tiny text-based epilogues given to each recruited character at the end of the game are slight, but they speak to radically different futures for the characters involved, all depending on their closest support (I told you there was shipping) and the fate of their homelands. Characters you don't recruit all too often end up on the other side of a battlefield, and there's nothing you can do in that timeline but cut them down. In my second playthrough, with Dimitri's, I thought I'd made my peace with the deaths of many of the characters I'd been closest to in the first. But when Raphael, the big goofy brawler from Claude's house, ended up being an inevitable enemy in a battle I didn't even want to fight, I found myself desperately hoping for negotiation options that didn't exist.

The recruitment system of Three Houses really spotlights the fact that most of these kids could be fighting on either side with equal fervour, and while these are mechanics of convenience, they also add a sense of futility and frustration to the battles in the second half. As a die-hard Paragon in every game that will let me be one, Fire Emblem almost lets me win, but there's inevitably a catch somewhere. I can't save everyone - and the selective mysteries solved in each route mean that the endings I secure for characters in one playthrough are reversed as soon as I reload for another go. I know that, in one timeline, childhood friends turned war buddies Sylvain and Felix, kindred opera spirits Dorothea and Manuela, and cinnamon roll duo Annette and Mercedes all live happily ever after in queer romantic bliss; but next time around, Felix ends up wandering as a lone mercenary - only occasionally stopping in to Dorothea's opera to longingly lock eyes across a crowded hall - Annette and Sylvain marry alternative cinnamon rolls, and Manuela disappears into the mists of history because I never recruited her. In a third timeline, I marry Dorothea and I ascend as the fantasy Pope with my best girl at my side. In every timeline, these are my babies, and there's an emotional tug to pulling them out of one life path and onto another that only a game like this can really deliver.

The weight of relationships coupled with the near-requirement of exploring different options sets this apart from most emotionally weighty games I've played (because, sure, I could play Mass Effect trilogy as a Renegade and romance someone different, but... I won't) and the fact that its all delivered within the confines of a bunch of pretty well-trodden Fire Emblem tropes makes me wonder how many potential feelings I've been missing in other JRPG series over the years. Give or take a few more well-rounded queer options (unfortunately, a couple of the same-sex endings for a male Byleth involve outright queer-baiting, as do some of the final student relationships) the configuration of tropes in Fire Emblem are enough to make me want to go around forever to figure out all of its permutation - with one exception. I still haven't managed to steel myself for that maybe-lawful-evil run that I steered myself away from in the first place, and having now seen this path from all other angles, I'm not sure when I'll be able to steel myself for the final piece of the puzzle and carve a path through my former allies for the sake of game completion. If you want a video game that brings all of the good pain, and you're sympathetic to some of the archetypes of this type of series, Fire Emblem is an experience that gives a ton of great content (and ships!) to chew on

Posted by: Adri, Nerds of a Feather co-editor, is a semi-aquatic migratory mammal most often found in the UK. She has many opinions about SFF books, and is also partial to gaming, baking, interacting with dogs, and Asian-style karaoke. Find her on Twitter at @adrijjy.