The Romans called it Mare Nostrum, “Our Sea” but the centrality of the Mediterranean  goes far beyond the Romans and the Eternal City. In point of fact, long before the Romans, the Phoenicians and Carthaginians sailed the seas, and they themselves are newcomers to the Greeks, the Minoans, the Egyptians. A variety of cultures and peoples, with a wide variety of myths, stories and legends have grown up on the shores of the Mediterranean. Some of them you know--some of the details of the Odyssey, for instance, are unforgettable. Others have been sadly obscured by time and distance. 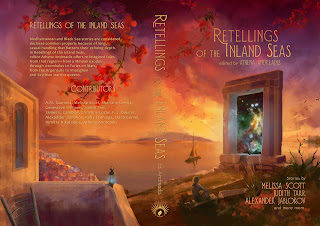 In Athena Andreadis’ anthology Retellings of the Inland Seas, Andreadis brings together a variety of authors to remake these old stories into new guises for the modern age.

The ending of the anthology has Andreadis reveal what was the originating myth/story that inspired each of the stories. As I was reading through the stories, unaware of this revelation at the end, I played a game with myself trying to figure out what the story was bringing forward for a modern reader. This added a layer of intellectual interest and study to the generally excellent stories themselves, and I recommend readers do not “skip” forward and try and discover and become engaged with the narratives on their own terms, first, before being colored and influenced by the expectations of knowing what the particular story’s template is.

The stories are universally strong and well written. There are no repeats, and the use of the source material by each of the authors is subtly different. So we wind up with a variety of settings and milieus for the well crafted stories, overall. My favorite story of the set has to be F.J Foucet’s very creepy and effective “The Fury of Mars”. The title does give away that the Greek Furies are the inspiration for this story of a Judge on a Martian colony who discovers that her own past, and her own crimes, have not been covered up and forgotten quite as much as she thinks they have been, It is this story that best represents the power and the guiding principle and the point of Andreadis’ anthology: to bring these powerful ancient myths, stories and themes and bring them into a modern day readership.

The volume is relatively slim, so that avoids the problems of repeating themes and ideas, and it gives the authors and their stories their own space. I appreciate a good editorial hand in the anthologies that I do read and Andreadis really hits the mark here. I think this volume really stands well with her previous volumes, To Shape the Dark and The Other Half of the Sky. The stories here, although not as science focused as those volumes, still shows the anthologist’s commitment to science fiction in short form.

In Athena Andreadis’ anthology Retellings of the Inland Seas, a variety of SFF stories take us from the seas of space to aliens visiting ancient Greece. With a guiding light of the stories, cultures, and mythos of Mediterranean cultures, the authors in this anthology rediscover, remix and reforge classic themes from this wide swath of peoples and places.. The stories in this anthology take classic, often familiar narratives and present them in modern forms that recapture and re-empower stories long obscured, polishing them into gems on the shore for readers to pick up and discover.

Bonuses: +1 for excellent editorial work and choice on the part of the anthologist, +1 for a strong set of stories whose authors hit the theme and guiding principle of the anthologies

Penalties: -1 As always with an anthology, not all stories and authors are going to work for a particular reader