Murderbot jumps to a full novel length adventure in Network Effect, the latest Martha Wells story of a sentient SecUnit seeking a place in a world where it must hide its renegade nature. 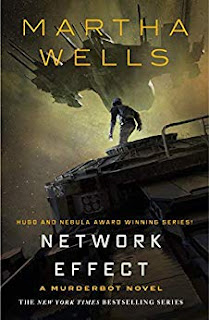 Since its self emancipation (as detailed in All Systems Red), Murderbot has had a number of adventures. Finding time and space to mainline new and classic shows like Sanctuary Moon and Worldhoppers, but its own evolving consciousness and his bond with humans means that Murderbot is still working as a security consultant. Now in Network Effect, fifth and latest adventure, an attack and kidnapping of his human friends while guarding them leads Murderbot to not only act decisively to help them, but to reunite with an old friend as well.

There is plenty of more fleshing out of the world that Wells has been building over the previous novellas. We’ve seen pieces of this corporate dominated interstellar civilization before, and get an even better sense of how to survive in this world, and the challenges not only Murderbot has, but ordinary people do as well. The previous novellas have slowly built up an image of a series of frontier worlds and hubs under the control of various corporate entities. More traditional political entities have very little real power. We’ve seen how these corporations employ and abuse people to explore and exploit worlds, and how those corporations conflicts with people and each other causes lasting harm and danger. In Network Effect, we get a lot more detail on that as well as alien artifacts, legal structures, and much more. Given the space of a novel, we get a lot more of how Wells’ universe works and this novel answered a bunch of questions I’ve had about this verse. At the same time, it opens up even more possibilities for future corners of the verse to explore and use as setting.

The heart of the novel, like all of Wells' writing is not the excellently rendered world, or even the crackerjack plotting. It’s character. Murderbot and their interactions with those around them is delightful. Not only their humans, but there is the return of ART, the transport seen in a previous Murderbot adventure, Artificial Condition. ART and Murderbot’s prickly, fractal and interesting relationship goes through a lot of stress and change throughout this novel. In a real sense, it becomes a plot driver, the character development and changes between the two driving actions by both as much as by external events. While the human characters in Network Effect aren’t quite as there as Murderbot and ART, the strong duo of ART and Murderbot represent a hub of character that drives the novel.

And those two characters are so relatable to readers, both ART and Murderbot. That really is the secret sauce of Network Effect. Murderbot is a very introspective character, they are by design. It is an introverted SecUnit who would rather just consume shows than do just about anything else. Sure, Murderbot is capable, intelligent and when it takes drastic action, it takes drastic action and give no excuses. But they would rather now, and would rather just be left alone. We get a lot of time in its head as they debate courses of action, ponder what show to read next, and then finally decide, yeah, humans are stupid but no one is going to hurt THEIR humans. We also get some excellent ladling of a prior event that Wells doles out in dollops that Murderbot recalls that turns out to be crucial to current events. The use of this as a device helps keep character tension and action percolating nicely, a real fine bit of writing.

What also, ultimately, makes the Murderbot series so readable and so appealing is the modular, serial nature of the four novellas and now this fifth book, a full novel. Wells masterfully tells us everything that you need to know about Murderbot and its world, and while you certainly in my opinion should read them all, you could read All Systems Red and jump right here to Network Effect without any issues at all. In fact, I think you probably could start right here if you wanted and with Wells’ excellent writing, get the gist of who and what Murderbot is, what it wants, and hit the ground running. That’s uncommon in these days of series that are carefully and inexorably building up like precarious towers, depending, for good and for bad, on all of the previous works for a reader to appreciate the work in question. Aside from knowing Murderbot’s nature (in All Systems Red) and ART’s reappearance (from Artificial Condition) the adventure here is very self contained. It IS like jumping in on episode 35 of Sanctuary Moon and figuring things out from there without spending the spoons and time to read up to this point. While the previous volumes are delightful and I commend each of them to readers, if you, reader have not yet tried any of the Murderbot series and want to “jump in with the last”, I can confidently say: Yes, you can. And you should.

Bonuses: +1 for a very strong central character; +1 for immersive writing that allows new readers an entry point into the series here.