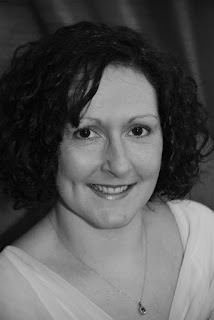 Anna Stephens is the author of the Godblind trilogy: Godblind, Darksoul, and Bloodchild, which are published through HarperVoyager in the UK and Commonwealth. Her new series, The Songs of the Drowned, begins with The Stone Knife, publishing worldwide on 12 November 2020.

A literature graduate, Anna loves all things SFF, from DnD to Doctor Who to classic Hammer and Universal horror films.

As a practitioner of 14th century Italian longsword, and a second Dan black belt in Shotokan Karate, she’s no stranger to the feeling of being hit in the face, which is more help than you would expect when writing fight scenes. You can find her at  http://anna-stephens.com or on Twitter at @AnnaSmithWrites

1. What book are you currently reading?
Hi Paul! I am currently reading an ARC of Giles Kristian's Camelot, the sequel to the outstanding Lancelot. I've only just begun it but it promises to be as lyrical, beautiful and bloody as Lancelot. This time we're following Galahad's adventures. I'm very much enjoying it.

2. What upcoming book are you really excited about?
Having beta-read both The Hollow Empire by Sam Hawke and The Jasmine Throne by Tasha Suri, I'm practically frothing at the mouth for them to both be released so that I can yell at other people about them! Aside from those, I can't wait to get my hands on Dog Rose Dirt, Jen Williams' debut thriller, as she's an auto-buy for me and I love everything she does. And then, of course, there was Scott Lynch's announcement late last year that he'd handed in Gentlemen Bastards #4. So many, in other words!

Ooh, I do love a good reread. As we're in the middle of the least zombie apocalypse ever, it would need to be something light, so I'm probably going to jump back into Discworld at some point – in fact, I'll probably reread the Watch series, as they're my ultimate favourites.

A book I've changed my mind about? Erm… that's actually really tough. I think I'd go with Dragonflight, by Anne McCaffrey. Or the first trilogy of the Dragonriders of Pern, in fact. They were pretty much my gateway books into full-on fantasy when I was a kid – think I read the first one when I about 10 – and I absolutely loved them. Must have read them 20 times each, always from the library. And I reread them recently, just for fun, and … they're good in a nostalgic sort of way, but the lack of female agency, or the women as subordinates even when they ride the golden dragons that are the only ones capable of reproducing… made me uncomfortable. There's that very complicated issue around sex and the riders' consent – it's even made obvious in Dragonflight where F'lar comments to himself that Lessa never wants sex unless the dragons are having sex – so in effect, Lessa never wants sex at all, but her dragon's desire overcomes her and she and F'lar have sex when their dragons do, on account of the mind-meld. She doesn't want F'lar, therefore she doesn't consent.

Not only that, but only men can ride dragons of other colours, so when blue and green dragons have sex, does that mean their riders are forced into a homosexual encounter with each other?

While I didn’t pick up on those nuances as a child, they're certainly front and centre in my mind when I think of those books now. 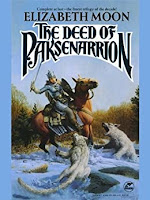 I think The Deed of Paksennarion probably affected how I write for many, many years. Absolute classic high fantasy, though with a female asexual protagonist, which must've been pretty revolutionary for when it was published – 1988. But it didn’t necessarily affect my writing in a good way. A lot of people know the genesis of my debut novel, Godblind, which took around 13 years from first draft to publication, and a lot of those years it spent as a high fantasy type book. That was what I was reading, that was what was available to me at the time, as far as I knew, so that's how I wrote. I thought that was the type of story I needed to write to get published, and don’t get me wrong, I still love Paks, but it had a writing style that, even though the protagonist was a female paladin, was fundamentally different to where I've ended up, and I do think as a result of books in that vein, I didn't allow my writing to evolve as naturally as it could/should/would have if my reading diet had been more varied.

Well, my latest published book is Bloodchild, the concluding volume of the Godblind trilogy. It's awesome because it has more blood than you could swim through, more battles than all the Crossfit in the world could prepare you for, and more gods than … okay, it's got four gods. And none of them are happy gods. And to quote Grandpa, it also contains: Fencing, fighting, torture, revenge, giants, monsters, chases, escapes, true love, miracles... okay, maybe not the giants. I know: inconceivable!


HOWEVER, if you want to know about my upcoming book, then that's a very different barrel of monkeys. The Stone Knife is published worldwide on 12 November 2020 and is the first book of the Songs of the Drowned. It's set in the land of Ixatl, where monsters, gods, magic and music combine. Courtesans, spies, warriors, killers, plotters, shamans, spirits and slaves fight on both sides of an Empire hungry for conquest and the people resisting their spread. It's got all that good Anna Stephens stuff, including warfare, sekrit plans, a desperate defence and a little bit of kissing, plus magic and monsters in a non-traditional fantasy environment.

Thank you, Anna!
POSTED BY: Paul Weimer. Ubiquitous in Shadow, but I’m just this guy, you know? @princejvstin.
Posted by Paul Weimer at 12:00:00 AM