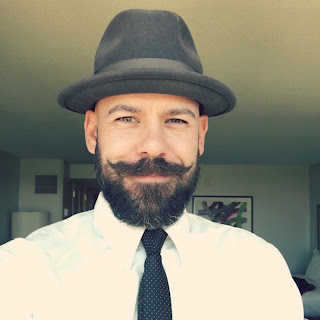 Jay Sherer co-wrote the Amazon Top Selling time travel novel Timeslingers with Nathan Scheck (who also co-wrote Death of a Bounty Hunter). Jay co-hosts The Story Geeks podcast, which digs deeper into sci-fi, fantasy, and comic book stories. He also produces content for the Fantasy Storytelling YouTube channel, which exists to help people write and produce their own science fiction and fantasy stories. When he isn’t writing, podcasting, or YouTubing, you can usually find him at the beach in Southern California with his Corgi, Gatsby.

Today he shares his Six Books with us:

I’m about a third of the way through All Our Wrong Todays, which is a time travel novel by Elan Mastai. It’s interesting, because it’s a personality-driven sci-fi book and the narrator's voice feels unique for the genre. I’m enjoying it thus far!

Before picking up All Our Wrong Todays, I read Blake Crouch’s time travel novel, Recursion.

Dark Matter. I realize it’s not “upcoming,” but it’s in my personal read list. I enjoyed Blake’s style and the novel kept me engaged, so “Dark Matter” sounds awesome. But as far as upcoming books—or just released books—I really want to read Max Allen Collins’ novel, Black Hats. I re-watched Road to Perdition the other day on Netflix, and I love that film. Black Hats sounds like something up my alley. I rarely read novels that aren’t sci-fi, fantasy, or detective noir, but that one sounds awesome.

That was a fantastic ride, and I’m looking forward to reading

Every other day I think about re-reading Huckleberry Finn. That book has been inspirational to me. A story that was equal parts adventure and deep social commentary. I’m consistently impressed by what Mark Twain brought to the table as an author. That’s always on my re-read list. I also would love to re-read American Gods, or at least re-listen to the full-cast audiobook. For one thing, my co-writer and I have a full-cast audiobook coming out later this year, so it was inspiration to me in that way. But American Gods, in my opinion, has one of the best premises in modern history. The idea that our beliefs hold so much power that they can manifest as gods and impact those around us—phew… That’s pretty mind-blowing, and I think it speaks to the impact of storytelling, which I consistently come back to over and over again.

After finishing Black Sails on Starz, I wanted to revisit Treasure Island, which has been one of my favorite novels of all time. I’m not saying it’s not my favorite novel of all time… but in re-reading it I realized that it’s really young adult driven. And while that makes all the sense in the world, and though that book will always have a special place in my heart, I also came to the conclusion that it’s not for me anymore. Which just made me kind of sad. But, I guess that’s life, right?

Huckleberry Finn. I mentioned it already, but I think about the impact that book had and it’s importance to modern American society. This is a book that in post Civil War America was using storytelling to illustrate a powerful point about integration and acceptance. Obviously, as a product of its time, it makes us uncomfortable, but I think Twain intended that. He wanted us to see, through the eyes of a boy, what our society was doing to a people group. And the journey of Huck goes on, and how his view of the world begins to change, has some incredibly profound moments. As I answer this question it’s just further solidifying in my mind that I need to re-read it. I’d also love to revisit King’s The Dark Tower series, too.

My co-author Nathan Scheck and I are following up our time travel novel Timeslingers (hence my interest in all these time travel books) with a supernatural steampunk western called Death of a Bounty Hunter. We released Death of a Bounty Hunter earlier than planned since everyone is stuck at home, and we wanted to show our appreciation to them for helping us make Timeslingers an Amazon Top Seller in alternate history and time travel. More details over at www.deathofabountyhunter.com!

I feel like the best way for me to tell you why I think it’s awesome is to let one of our characters speak for me:

"This isn't a story about the man-ogre with a Gatling gun for an arm, or the Tiwan sorceress covered in tattoos, or even the long-winded banker. And, while the speedster idiot and the large, very funny Pinkerton detective lady do play a role, it's not about them either.
"You might think this tale is about the Sheriff of Jericho, a man who will do just about anything to save a loved one, including work for a secret, occultish society. And then there’s the woman who bears the brunt of his sins and must defend herself when she's most vulnerable.
"All those characters appear in this story. I do, too. But it’s about more than that. The one I was assigned to, the Korean bounty hunter—he’s at the dead center of it all. Flint. A bounty hunter who comes face-to-face with something we all do: guilt and shame, and the desire to run from them. Not because we're cowards, but because sometimes we just can't stand ourselves. It's a story about that.
"The Gatling guns, the Occult, the paranormal, and even the demon spawn—all those things are just along for the ride."

- Mockingbird-Preacher-Witch (Like I said, I’m in the story. Just read it.)