Microreview [Book]: The Court of Miracles by Kester Grant

An updated Les Misérables with some wonderful sisterhood relationships at its heart... but how do you make a 21st century book less queer than its 19th century source? 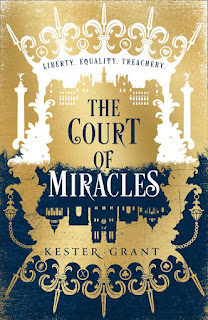 Ah, Les Misérables. Decades before Hamilton was making musical revolutionaries cool for middle-class theatregoers, we had the all-singing all-dancing French Revolution June Rebellion of 1932, and quite some time before that we had Victor Hugo's Heckin' Chonker of a meditation on the nature of poverty, love, redemption, and oh my god so many pages about the daily lives of nuns. Now, bursting in to shake up Hugo's rich cast of characters comes debut author Kester Grant, with a book which imagines what the cast of Les Mis (at least, the ones who make it to 1932... sorry Fantine) might be getting up to in an alternate world where the French revolution failed and the "Court of Miracles" - the mythical shadow government said to over Paris' underclasses and which Anglo readers may only recognise from Disney's The Hunchback of Notre Dame (hey, also based on a Victor Hugo thing!) - plays a huge role in many people's lives. At the centre of this is Éponine, daughter of Les Misérables' most unpleasant and opportunistic criminal, whose canon position between the two worlds of the narrative makes her perfect for this new imagining.

Alternate history aside, the biggest shift that The Court of Miracles makes is this focus on Éponine (called "Nina" here), and in removing the character of Marius, on whom she wastes most of her adult emotional energy in the original. Instead, the focus is on Nina's relationships with her sisters, and her growing antagonism with Kaplan, "The Tiger", a slaver who has taken over one of the court's Guilds and is now using it to buy women who catch his eye. When Nina's father Thénardier decides to sell his older daughter Azelma, her last act is to buy Nina the protection of the Thieves' guild through her connection to the Court's Messenger, Femi. Passing the test for entry with ease, Nina starts making a name for herself and widening her circle of contacts and influences within the Court's guilds, but she never gives up on rescuing her sister - and, when a botched attempt at doing so leads to her meeting Ettie (i.e. Cosette), she takes the younger girl under her wing as well. Her adventures also take her into the palace, where she meets and captivates the Dauphin; and into the orbit of a group of students led by the exiled Enjolras St Juste.

Aside from the obvious Les Misérables parallels, Grant also points to strong influences from the Jungle Book in the text, particularly when it comes to the history and mythology of the Court. Interspersed within the narrative are tales about the historical conflict between Ysengrim and Reynard - characters who also make an appearance in the book's in-universe swears - and an allegorical story of mice and snakes representing the failed revolution forms a key plot point in Nina's  most notably in The Tiger as well as some of the other characters within the Court. It's the interactions between these two elements, and the new dynamics introduced here, that provide a lot of the novelty in The Court of Miracles, and set it apart from being a straightforward alternate universe fic.

Nina herself benefits hugely from this new framing, which gives her a "home turf" that isn't simply avoiding the worst excesses of her criminal father and offering her at least a couple of connections that she can make on an equal footing, which in turn strengthens how her less equal relationships with the students and the nobility play out. Grant takes Éponine's hopeless devotion and transforms it from a tragic flaw, directed at a boy who never does much to deserve it, into the foundation for a morally complex but ultimately relatable hero, who puts all of her cunning and skill at the disposal of sisters who she can be assured would do the same for her. The other major change is Cosette, who is significantly younger than Nina in this version and becomes just as invested in her adoptive sister's safety and wellbeing, as well as getting some of her own fun quirks and moments of glory.

The strength of the bonds between women in The Court of Miracles are highly welcome (like, they can actually talk to each other without dying or dishing out abuse!), but there are relationship tweaks that I liked a whole lot less. Foremost among them is the removal of huge swathes of canonically queer subtext from male characters in the original story, lea. Over the course of the story, Nina has not one, not two, but three boys swooning over her, including the Dauphin (who kind of replaces Marius by being a lonely thoughtful-but-privileged twit who is far too ready to fall in love with girls after five seconds in their presence), Montparnasse (here a master of the Assassin's Guild and actually kinda cool) and (prepare yourself) Enjolras St Juste. Yes, that's the Enjolras who, in Hugo's canon, is specifically said to not be interested in women and to love nothing but the revolution, while his buddy Grantaire cares about nothing but him.

Instead, in The Court of Miracles there's nothing textual to suggest Grantaire's feelings for St Juste go beyond camaraderie, while St Juste himself is all up in the "YA love interest" tropes with Nina. Does he stand too close to her in order to earnestly express his political ambitions while she gets distracted by his closeness? Yes! Does someone walk in on them sneaking around a party so they have to pretend they snuck away to make out? YEP. To not put too fine a point on it, St Juste's arc here very much reads as straightwashing, and I don't think a reversal in later books is going to change how problematic this is. On top of that, there's also the decision to genderbend Inspector Javert and then heavily hint that she and Valjean were formerly lovers and that her obsession with bringing him to justice is her response to being jilted. Given that the Court of Miracles is allegedly invested in showing a more diverse version of Paris, and Nina herself is a woman of colour, the removal of all queer content - and this is a removal, since there is less here than in a novel from 1862 - is a bizarre and disappointing choice.

And this is a particular shame because The Court of Miracles is otherwise a great experience - intense, action-packed, full of difficult choices and moral grey that still leaves the reader with characters to root for, and above all super engaging. That makes it a hard book to sum up for me - I'm sure for plenty of readers, the straightwashing won't really figure in their experience (it's just a few scenes after all! And the sister relationships are so wonderful!) and, for readers without knowledge of the source work, specifically the novel, the lack of queer content isn't going to be more than a not-unexpected annoyance. At the end of the day, though, I did not plough through hundreds of pages of translated classic literature to see het!Enjolras swoon over Éponine and Javert turned into Valjean's jealous female ex. In 2020. To which I can only conclude: what the heck, Court of Miracles?

Bonuses: +1 for Nina and Ettie and everything that springs from their relationship

Penalties: -3 for the straightwashed, thirsty-for-Nina Enjolras St. Juste that literally nobody asked for


Posted by: Adri, Nerds of a Feather co-editor, is a semi-aquatic migratory mammal most often found in the UK. She has many opinions about SFF books, and is also partial to gaming, baking, interacting with dogs, and Asian-style karaoke. Find her on Twitter at @adrijjy.