The Unlikely Escape of Uriah Heep offers readers a look at a Wellington New Zealand where a man’s ability to bring characters from books into the real world threatens the entire city. 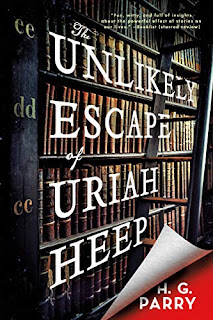 Rob Sutherland has a secret. Or more properly, his brother, Doctor Charles Sutherland, noted expert on Charles Dickens, has an ability that he, and his parents know, but no one, including his would be fiancee Lydia, does: Charlie can, by reading a book, bring the character into the real world as a living and breathing person. It’s an ability he’s tried to suppress and dampen down for years, but when the titular Uriah Heep escapes from a copy of David Copperfield, his escape leads Rob, and Charley to learn that there are more literary creations than he himself read out hiding in Wellington...and that someone has a plan for them, and the city, in The Unlikely Escape of Uriah Heep by H G, Parry

Our point of view of the novel focuses on and almost exclusively keeps on Rob, rather than Charlie. Given some revelations regarding Charlie, both through the limited bits from Charlie’s pen and from what Rob can see and what he tells us, and what he learns himself, this is a good choice for narrative momentum, mystery and driving the reader to find out just what Charlie’s deal is, and who is the real antagonist in the situation. The brotherly dynamic between Rob and his brother Charlie is a strong one, with Charlie’s brilliance but lack of social skills in comparison to his more socially adept brother, who does not share his special ability, doesn’t quite understand or appreciate it, but finds himself dealing with its ramifications throughout the novel

I should be clear and up front about something: I may be a somewhat biased reviewer in a regard, but not in the way that you might think. You see, good reader, I am a relation but not a direct descendant of Charles Dickens, so that a novel where his literary creation escapes into the real world was and is always one I would be extremely interested in. I’ve read and been interested in Dickens' work from a young age. His work has always been part of my life.

In point of fact, I would say that people not at least moderately interested in Dickens might not find the book to their liking. Dickens’ writing, his life and what he means are central to the book and what the book explores in the course of the plot and the two central characters.In addition, many of the literary characters we meet who have come out of their books are all from the same stratum and time period. There is a temporal unity to the book in terms of who we meet that you don’t get in, say, John Myers Myers Silverlock, which is another book replete with meeting embodied literary characters. In that work, the characters run the gamut of (admittedly only Western) literature whereas this novel’s range of sources of characters is a little narrower and more focused. The author clearly has an abiding love of these characters and exploring them, and brings them to life, but I had hoped for a wider range for her to have drawn upon.

The worldbuilding that the author brings to the novel is another highlight of the book. Literary characters in the real world is not a unique idea, but it is definitely one that Parry has decided to make her own and put her own spin on the concept. The author has a lot of invention and ideas on how literary characters drawn into the modern world might act and work and handle themselves, as well as the different ways those characters might manifest themselves off of the page. The author clearly has taken palpable and readable delight in her set of literary characters that Rob and Charles discover, and must deal with, even as the mysterious villain lurks just off of the page, planting their scheme. It is this invention that helped propel me as a reader through the book. The plot takes a backseat, really to character interactions and invention and how they all bounce off of each other, especially with their individual agendas, goals, and plans. The novel sings and resonates more on that than any particular overarching plot. Possibly my favorite, although she does not get a lot of screen time, is a certain White Witch whose powers don't quite work in the real world as she might like.

That said, I  think I should mention is that the novel suffers from a couple of flaws I found that unfortunately knocked it down for me. It’s relatively sedate plotting and pace make this not a ripping page turner that you might be looking for in a book. It’s a studied and measured book in terms of pacing and plotting. It doesn’t quite go to the point that the plot is so thin as that said plot needs a slow pace and march to fill the book, but the book is definitely not overstuffed with plot and action, given its size. As mentioned above, the worldbuilding sometimes shines through a bit much for that to occur. In addition, there are a couple of gear shifts in genre tone throughout the book and the transition between them (and to explain in further detail would be highly spoilery) don’t always come off as well as I might have liked.  There is roughness in those shifts that leads to a bit of an unevenness at several points.I attribute this probably to debut novel roughness, and look forward to what the author can do with her clear and abiding talents with this novel under her belt.

Despite these flaws for me, the worldbuilding and the secondary characters, and the strong thematic and literary focus on Dickens made me enjoy the novel. One additional positive note is that it is a nicely contained story, with a proper and solid ending that makes it a complete literary experience rather than something open ended. So if you are looking for a quasi urban fantasy where the love of Dickens and his work are an asset to reading, The Unlikely Escape of Uriah Heep is for you.

Bonuses: +1 for a vividly embodied relationship between the narrator and his brother.
+1 for excellent invention in terms of the literary characters

Penalties: -1 Pacing issues in the book made it a sometimes too stately read
-1 Readers who aren’t into Victoriana or especially Dickens will have less to go on to hook into, here, especially in terms of the literary characters met.
-1 for some somewhat uneven gear shifting of genre throughout the book

Nerd Coefficient: 6/10 still enjoyable, but the flaws are hard to ignore