We are rapidly approaching the end of the year and it is probably time for me to reflect back on this year in comics and figure out some sort of list. Even though it isn't my current pick of the week, Gideon Falls is a book I have been thinking about more as we approach 2020. 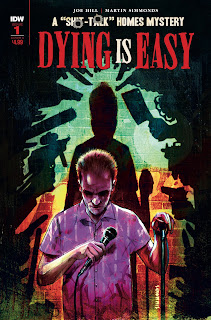 Pick of the Week:
Dying is Easy #1 - When I heard Joe Hill partnered with Martin Simmonds for a new book coming out about an ex-cop turned stand up comedian I was intrigued and curious how something that seemed so far out of Hill's element would work.  Hill's work often has comedic asides and this book opened up strong as Syd Homes struggles through a set at a dive comedy club called Mr. Funnies. As Homes wraps up his set a much more successful comedian, Carl Dixon, takes the stage.  We learn that the other comics have issues with Dixon as he is know for stealing jokes. Hill is the lead writer, but I am curious how much of an influence Simmonds had on some of the dialog.

It is clear that something drove Homes off the force and we get a hint of what it was when he steps out of the club and is confronted by a woman.  In what was likely his last case, Homes found evidence that a woman had beaten her child to death.  Her sister didn't believe this and blames her suicide on things Homes said to her.  I am guessing we will learn about this as the series continues, but Homes has a dark past that will likely shed some light into some of his stand up bits.

I will avoid spoiling the hook that Hill and Simmonds set at the end of the issue, but Homes finds himself tied up in a situation that will require his detective skills to clear his name.  I was impressed overall with Hill's stand-up writing and really enjoyed the comedy club setting.  My guess is Hill watched a lot of old stand up to get the vibe and artist Simmonds and color artist Dee Cunniffe hit it out of the park with the dark and shady vibes of Mr. Funnies and this depressing world Homes finds himself in.  I was pleasantly surprised with this departure from horror and am looking forward to other characters that we will meet moving forward.

The Rest of my Pull List:
This week took a bigger toll on my wallet than most as I also picked up the Target Vader finale, Captain America, Gideon Falls, Something is Killing the Children and Undiscovered Country.  This might have been the most impressive week of books in 2019 as every title delivered.  It is clear why Gideon Falls won an Eisner and why Undiscovered Country had so much hype surrounding its release.  I really enjoyed all of the books this week, but have an extreme bias towards anything Joe Hill.