Mondays on Mandalore: Star Wars is not the Problem

Welcome back to Mondays on Mandalore, where we usually discuss The Mandalorian. This week is a little different, since another small, live-action Star Wars production was released, called The Rise of Skywalker. You may have heard of it.


THIS IS YOUR OFFICIAL SPOILER WARNING FOR THE LAST JEDI AND THE MANDALORIAN. 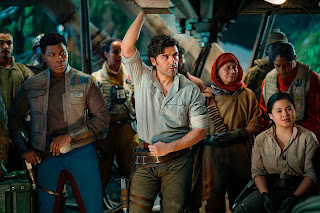 J.J. Abrams has spoken several times of the Mystery Box he got when he was a kid. Basically, a prize from an arcade or toy store or something, it was one of those blind bags where you get a random toy. Unlike most kids, though, he never opened it. Because what was actually inside could never live up to what he imagined it being.

I wonder if he wishes he had left Star Wars in the box. Because the fandom tore that box open like a kid on Christmas morning, wrapping paper everywhere, hungry to see the perfect gift waiting inside. And instead of the LEGO UCS Millennium Falcon they were really sure Santa had packed in to a much smaller box, they got a stupid PlayStation (topical analogy, I am nailing this). But if two months ago, they were just given the PlayStation, they would have been over the moon.

That's where we're at with Star Wars. The Rise of Skywalker is a rally good movie. The writing is solid, the pacing is good, especially considering they had a lot to cram in. There is none of the long, side-quest elements of The Last Jedi. There is so much action. There is amazing payoff, from things I honestly didn't expect.

And yet. This spoiled fanbase, which if you are of my age, spent your entire life waiting for these movies, not only has those, you have all this other content and it's great*. Shows. Books. Comics. Video games**. But no, because it's not the fanfic in their head, it's not good enough. Because Disney saved bought Star Wars, somehow that has sullied the brilliant vision that Lucas had and made a movie about space wizards in the future-past.

Did no one watch the prequels? Is that what you want? Two hours of exposition about trade contracts and pedigreed actors sleepwalking through their performances***? Was the Expanded Universe so great? Cuz... it super wasn't.

But people talked themselves into what it was going to and should be, and they ripped the box open, and even though what they got is objectively pretty good, it wasn't good enough.

That's not Johnson's fault, not Abrams, not Disney. I'm not saying that you have to like the sequel trilogy, but I am saying if you don't, you should probably look at why.

Also, the Mandalorian was awesome. Best episode yet. Give Deborah Chow her own trilogy. More on that next week.

*The show Resistance… tries.
**I really wish we had gotten the 1313 game we were promised.
***Except Ewan McGregor.

-DESR
Dean is the author of the 3024AD series of science fiction stories. When not holed up in his office  writing, he can be found watching or playing sports, or in his natural habitat of a bookstore.
Posted by Dean E.S. Richard at 12:00:00 PM