The Hugo Initiative: Harry Potter and the Goblet of Fire (2001, Best Novel) 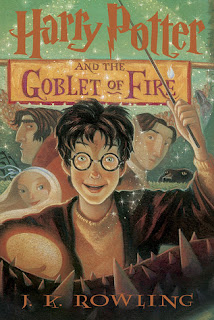 Executive Summary: There are two main plotlines of the fourth Harry Potter from J.K. Rowling. The first is that of the Tri-Wizard Tournament - an occasional magical competition which brings together champions from several of the world's magical schools. Harry isn't old enough to enter or be selected, but since this is a Harry Potter novel he ends up as a fourth champion and representing Hogwarts along side of Cedric Diggory, an older Hufflepuff. Much of the novel is centered around the various challenges Harry must face - technically on his own, but really with the help of Ron and Hermione. There's mortal danger, of course, but it's also a whole lot of fun.

The second is that of the potential return of Voldemort, "He Who Shall Not Be Named", the big bad looming over the entire series as well as being the reason Harry lost his parents when he was a baby. Voldemort's former disciples, the Death Eaters, are making ready for their Dark Lord's return and the edge of fear is returning to the magical community. Harry is a target, but so is everyone who doesn't stand with Voldemort. There are hints of just how nasty things might get.

There are moments big and small: Hermione's fight for the rights of house elves, Harry's infatuation with Cho Chang, the Quidditch World Cup, Mad Eye Moody, Snape being cruel, and the revelation (to the other students) that Hermione is an actual girl and not just a friendly book who wears glasses.

Legacy: I remember working an overnight shift at a gas station and seeing a front page feature of Harry Potter and the Goblet of Fire and that was the first time I had heard of Harry Potter. I had no idea and then it seemed to be the biggest thing in the world. It's what brought me to Harry Potter in the first place.

If memory serves, Harry Potter and the Goblet of Fire is also the first novel in the series where death comes so close to home - spoilers, but the novel is nearly twenty years old and is part of an enormously popular series - though "enormously popular" seems a vast understatement of the level of popularity enjoyed by the Harry Potter series.

Rowling Hugo Award win was her second time on the ballot, having been a finalist the previous year for Harry Potter and the Prisoner of Azkaban.

The popularity and the legacy of Harry Potter and the Goblet of Fire is completely independent of the Hugo Award - Rowling may not have known she was a finalist as it has been reported that she did not send a representative to accept in the event that she won. Harry Potter is one of the most successful franchises of all time, has inspired a generation of readers, and has stoked the imagination of millions. 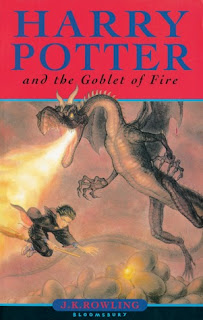 In Retrospect: Rowling's Hugo Award is very likely one of the most controversial in the history of the award - while beloved, the Harry Potter novels have never quite received their due as literature. They are books for children and the series is wildly popular, a combination which is great for success and less great for earning respect (such that it truly matters).

The main thing working against Harry Potter and the Goblet of Fire for its place in Hugo Award history, though, is that it won the award over A Storm of Swords, by George R.R. Martin (as well as novels from Ken MacLeod, Robert Sawyer, and Nalo Hopkinson). A Storm of Swords is, notably, the third novel in his A Song of Ice and Fire sequence and widely considered the finest novel in not only that series but in Martin's acclaimed career. To those who care about such things, Martin is considered "core genre", writing epic fantasy and being a lifetime part of the Worldcon community. Rowling was an outsider who writes children's books. I'm sure there is a segment of the old guard Worldcon crowd who still has not gotten over Rowling's win and Martin's loss.

To a point, it does not because The Goblet of Fire is naturally an integral middle volume of a series and not a standalone. The backstory is contained in three previous books and the conclusion is ultimately the next three books. And yet.

Rowling does a very good job in the beginning of Harry Potter and the Goblet of Fire in recapping prior events for new readers. Readers might miss nuance, but there is more than enough there to not feel lost. Of course, I can say that as someone who is very familiar with the series as a whole. It's impossible for me to truly go in blind, but the beginning of Goblet of Fire is just so smooth and I believe very accessible for new readers.

The novel holds up for long time fans of the series dipping back in and it's still a favorite in a series full of favorites. There's so much to love here, and one of my new appreciations is seeing Ron's father running towards danger time and time again. Mr. Weasley is generally presented as this goof who is far to obsessed about muggles and seems to be a bit of a putz - but that's also seen from the perspective of the kids and occasionally noted by the more disagreeable (and villanous) adults. When there is actual trouble, though, when the Dark Mark is in the air and people are scared - Arthur Weasely runs to help. I don't know that I picked up on that before, and I like it. The big story is obviously Harry and Voldemort and Dumbledore and the Tri-Wizard Tournament and all of that stuff the series is known for - but sometimes I'm interested in the small bits that resonate at different times in my life.

Was Harry Potter and the Goblet of Fire the right winner in 2001? That's a different question. In retrospect, A Storm of Swords would have been the more popular pick within significant parts of the genre. Martin was a previous Hugo Award winner for "Blood of the Dragon", a novella based on the Daenerys chapters from Game of Thrones. This is a bad way to look at things, but Martin has been recognized for A Song of Ice and Fire through that novella win in 1997 but given that there was no Young Adult Not-A-Hugo for Rowling to dominate at that time nor a Best Series award available to her - the only opportunity for Worldcon to recognize Harry Potter through the Hugo Awards were the two times Rowling was on the ballot (well, that and the next three novels).

I'm not nearly as bothered by Rowling's Hugo win as some. In retrospect, it does still feel like a horse race between Rowling and Martin - though I would love to be writing this essay on Nalo Hopkinson's Midnight Robber instead. That would have been a worthy and important win.

A Storm of Swords was the more significant novel and would also have been a worthy win - both for Martin's career, he has never won for Best Novel, as well as for the novel itself. But Harry Potter and the Goblet of Fire was a solid, if unspectacular, Hugo Award win. It might not say nearly as much about the state of the genre at that time as a win for another might, but then again - maybe it does. The ballot itself is a statement and Goblet of Fire's win is a statement about just how significant Harry Potter was at the time, just how popular and beloved it was.

POSTED BY: Joe Sherry - Co-editor of Nerds of a Feather, 3x Hugo Award Finalist for Best Fanzine. Minnesotan.
Posted by Joe at 12:00:00 AM