Priest of Lies continues the story of Tomas Piety from Priest of Bones, a Renaissance fantasy of crime families and gang warfare with a strong voice.
--- 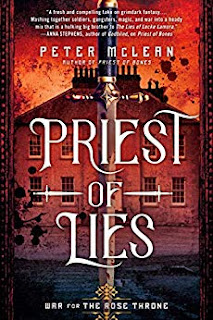 Priest of Lies, by Peter McLean, expands and builds upon Tomas Piety, central character of his debut novel Priest of Bones, and shows the consequences of a Renaissance crime lord’s success--bigger challenges and problems.  In the first nove, returned-from-the-war priest and crime lord Tomas Piety found that re-establishing his power and the power of the Pious Men was more difficult than he expected. A threat from the rival nation of Scandia was undermining his home of Ellinberg and messing with his ability to reestablish his hold in The Stink, his home turf, and to extend his power further.What looked like a simple rivalry between gangs in his city proved to be a front in a secret war.

The new book picks up not long after the end of the previous novel. Piety is now married to Ailsa, who is to outward signs the love of his life. However, known to no one else but they, she is in fact a Queen’s Man, a secret agent of the monarchy with broad and terrible authority that is a byword for scaring your children. Priest of Bones, in retrospect, can be seen as Tomas’ rise to power, but that rise being secretly shaped by greater powers still. Priest of Lies, then, has Tomas knowingly being shaped and guided by the Queen’s Men, and finding ever greater challenges. Those challenges will bring Tomas not only to greater power within his home city, but also a fateful visit to a true hive  of scum and villainy--the capital, Dannsburg, itself. It is there that Tomas will find his skills do, and sometimes do not, translate to the world of politics and political manipulations in social circles both benign and very deadly.

That rich worldbuilding seen in the first novel is extended and expanded on here. From the nature of magic, to the political structure of the capital (including the true structure of the Queen’s Men), the novel enfolds rich details of the main character’s world. Both Ellisberg and now, Dannsburg come across as distinct, real cities that you can imagine walking down the streets of (although do mind the smell of the first, and all the guards in the second).

The novel’s biggest strength is the strong and distinctive voice of the main character, Father Tomas Piety. This comes through right from the Dramatis Personae at the beginning of the book, which is written in character as if Tomas himself were describing himself and his fellow characters to you, through the first person narrative point of view that he brings to the book. We stay in his viewpoint through the book, and deepen and expand on his life and his personality from Priest of Bones. Tomas’ change in status, his marriage to Ailsa the Queen’s Man, and the new challenges he has to deal with show strain and pressure upon him, and we get a real sense of how Tomas deals, or sometimes cannot deal, with the challenges of his new life. Tomas Piety is one of the most rounded, well conceived and well drawn fantasy characters of recent years, and even when he does some pretty horrible things, the reader understands him, and understands his reasons for doing them. And yet when he shows kindness, mercy, and even affection, it only completes the picture of a complex and fascinating man. The rest of the cast through his eyes, especially his brother, Jochan, his second in command, Bloody Anne, and his wife, Ailsa, also come across very well. I also really enjoyed the scary as hell Billy, the would be cunning man (sorcerer) who Tomas shows affection and a protective streak toward.

Rest assured, for readers who aren’t as interested in deep character and want the thrill of a crimelord in an early Renaissance city and his often bloody adventures, the novel has that, as well. The novel is more measured in its use of violence on the pages, more often than the first novel having it happen offscreen (particularly when Tomas is in Dannsburg). The novel recognizes that Tomas doesn’t or isn’t going to get as personal and present in all of his business as he was when he just controlled an inn and a few streets. Rest assured, however, Tomas does not get flanderized or softened by his new position. He is still a hard man from a hard place who has clawed his way to power, respect and authority, and that Tomas is as dangerous as ever when circumstances require them, and a set piece conflict toward the end of the book shows the dangers and costs of conflict in the author’s world. It’s a sometimes very deadly world, and characters both new and old are not immune from the deadly dangers of Piety’s efforts.

Priest of Lies is a completely successful sequel to Priest of Bones that builds on its predecessor and develops and enriches the world that the author is building and the characters he is creating. I look forward to a third volume of Piety’s struggles and life.
---

Penalties: -1 for a bit of wavering focus as the gears of the novel and Piety's role shifts. Offscreen bits could have been presented a bit better.
-1 as some subject matter may not be to the taste of readers, given its Grimdark crime family focus.