Welcome to the final installment for the first season of The Mandaloiran. There are spoilers. Like, lots. 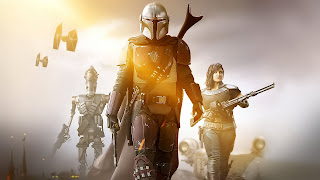 I don't even know where to start with this. The last two episodes were so, so good. Despite our ostensible goal here on ye olde blog(e), I don't really want to review The Mandaloiran. It's good, boom, there's your review. I'm more interested in discussion about what makes it good and what the themes are. Maybe that is what a review is, anyway, shut up, read the thing:

I Have Questions: Which is a good thing! Disney is in a sort of weird place with Star Wars right now - It has a trilogy of movies that, well, I love. Others don't, some for better reasons than others, but there is a massively divided fanbase right now. There have been two good animated series (and one just, horrid one), but never a live action series. There were a couple one-off movies that were... there. In addition, The Mandalorian is sort of the flagship for D+, and it has a lot to do.

I would not have faulted Disney if they just used this as another "Star Wars Story", made one season to see how it went, and wrapped it up with a nice bow at the end of season one. That way, if it sucked, everyone could just move on from it without a bunch of open in-universe questions.

So ending it the way they did was a bit of a risk. So let's leave this with what mysteries are in the offing for season two and beyond:

Why Do the Imperials Actually Want Baby Yoda? I am pretty sure they won't go with my hunch, which is that Baby Yoda is, in fact, delicious. It seems unlikely that the Imps we see were familiar with the Jedi, since it's pretty established most people never even believed they existed, even in the higher levels of the Empire. So why?

How did Gideon get the Darksaber? This question we essentially know the answer to, since Gideon was intermetal in Mandalore's downfall. I am very curious about the last days of Mandalore; the Darksaber ties both Rebels and the Clone Wars to The Mandalorian. Will we see some characters from either of them in the show? GIVE ME SABINE AND ASHOKA NOW.

Will Mandalore Rise Again? Things look not good for our armored heroes, The Way all but abandoned or wiped out. Mandalore, as a planet and as a creed, have ever been at odds with... pretty much everyone. After all those centuries of conflict, is this the end?

Do They Die? I mean... we know what happens. Rise of Skywalker is out, and that's the end of the Skywalker Saga, and Mando and Baby Yoda ain't in it. Like the characters from Rebels, this sort of puts a limit on how this story can end.

Those are my big questions - we'll see how season two answers them when it drops in fall 2020.