Mondays on Mandalore: Do the Evolution 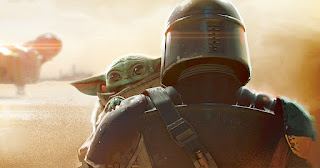 The least surprising theme of the Mandalorian is that he is largely alone. Secondary characters shuffle in and out, appearing in an episode or two before our hero moves on, Yodaling in tow. Once again, Mando embodies the Western hero who is always on the move, caught between worlds, and doesn't fit in or put down roots.

He is contrasted in 'Sanctuary' by a former Rebel shock trooper, who is burned out and disillusioned. I love that The Mandalorian is following in the footsteps of Rogue One here and showing us some of the diritier parts of the Rebellion. But she provides an excellent compliment to Mando, equally skilled and determined. But while she is clearly lost faith in the Rebellion/New Republic, she doesn't lack ideals. She still leaps at the chance to help the farmers out - ostensibly for money, but in short order, much more willingly.

Mando is there so him and the Yodaling have a place to hide. But, of course, it turns out he can't, and not just because of the steady stream of bounty hunters that are sure to come. He can't because he... can't. To most, taking off the helmet seems like the refreshing way to go. Like it's a burden to wear, and settling down with the pretty (deadly) widow and a bundle of cuteness is the right, easy choice.

But the helmet to him is not a prison to him, even if aspects of the settled life appeal to him. It's what protects him, not just physically, but from being too close to anyone, even his present ward. He has no definite plan for it beyond survive. But there has to be an endgame for his charge, at some point, and where will that leave Mando?

If the Westerns which so heavily influence this show are any guide, standing outside a doorway, watching the kid safely delivered to its new family.

-DESR
Dean is the author of the 3024AD series of science fiction stories. When not holed up in his office  writing, he can be found watching or playing sports, or in his natural habitat of a bookstore.
Posted by Dean E.S. Richard at 12:00:00 PM