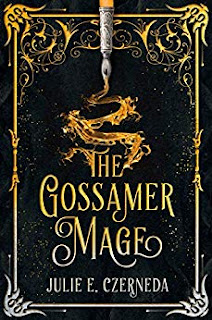 Julie Czenerda’s The Gossamer Mage takes place in a brand new fantasy verse for her. Although (unrelated to her first turn into fantasy, the Night’s Edge duology, this new single volume epic does keep the sense of an isolated realm, however, in telling the story of the realm of Tanane. Tananen is a realm isolated from the outside world by its Deathless Goddess, a Goddess also responsible for the unique aspect that Tananen has-- the presence of magic. The story of The Gossamer Mage is a threat not only to Tananen, not only to the Deathless Goddess, but a threat to magic itself.

The author richly brings her world to life. Reader of her Night’s Edge series, or her many science fiction novels are well aware of the deep and rich description, and evocation of environment that she brings to idyllic villages, galactic restaurants, and alien planets alike. Tananen as brought to life in the pages of The Gossamer Mage is no exception. It comes off at first to the reader as a basic epic fantasy world, but those expectations are quickly subverted with her choice of points of view and the unique facets that she brings to her created world. From the strange leftovers of mage called Gossamers, to the wonderful dancers, pushing the barges upriver, to the simply evocative and powerful way she describes a road during a snowfall, brings the reader fully into the world she has built. Readers who want an immersive experience with their fantasy will find much in the book to love.

Magic, of course, is central to the story, and the magic system that Czenerda has composed here is elegant, brilliant and the consequences and results of who can use magic, and the cost and side effects of doing so. The magic here is based on words, on the language of the Goddess, and it is a magic devoted to creation and making, rather than, say, a fireball. The steep price for magic, though, is its cost.  For, you see, the price of doing Magic is taking the life from a Mage, and when that life is nearly gone, to do any more magic is to court death itself. But magic is something that any magic, even one nearly drained of life, has an urge and desire to unleash. It provides a simmering tension that drives plot and character.

The plotting and unfolding of the plot and the nature of the problem go hand in hand with the characters. The novel has two primary points of view. Maleonarial, an old mage who has exiled himself from the community of mages and is drawn back in by a shocking incident, a use of magic that should not happen and with horrible results. The aftermath of that incident puts him on a path for answers, and a way to solve the issues raised. Thus, Maleonarial provides the reader with the informed, inside point of view on magic and we learn the rules on how it works from his eyes and his perspective.

Kaitealyon, our other point of view, works for the Deathless Goddess in a more secular capacity as a Daughter,  and her story intersects with Mal’s as the story unfolds. From her, we get the nuts and bolts of how Tananen works and lives, and the stresses she is under. Her secular perspective works well with Mal’s in helping complete the picture of Tananen. The fact that her son Lekand is showing signs of magic, of course, only adds to the rich character drama.

The author breaks from these two points of view now and again, fleshing out her world, feeding the reader more information, and slowly and surely painting a realm that, as isolated and as magic-rich as it is, is not all that it should be. Short sections called “Fundamental Lexicons”, particularly, provide necessary backstory and perspective on magic, the Goddess, and the basic way the world functions. We also find out just why Magic is only in this one realm, and the true nature of the Deathless Goddess who exacts such a pitiless cost for those who use it.

When her two main characters start traveling together, Maleonarial and Kaitealyon, the plot really starts to get moving and the threats and problems of the realm become clear. A careful reader will have seen the cracks, flaws and problems that beset the realm, even if there isn’t quite clear just what the problem is and what to do about it. Like the Veil around Tananen itself, as the mystery slowly lifts, the wide scale scope of the problem and it’s true nature reveal for the reader to see, and for her characters, so well sketched at this point, to have to come to grips with. There is a fair amount of misdirection that the author likes to use, once again this is fantasy that isn’t quite Wolfean in expecting the reader to piece out things, but certainly along that spectrum.

The Gossamer Mage is an enthralling fantasy whose depth of character, worldbuilding and plotting kept me turning page after page. The novel as an epic tells a crisp and complete story in one volume, a rich and comprehensive look at a fascinating realm, it’s unique characters and situation, and strong story building.

Bonuses: +1 for excellent and inventive worldbuilding
+1 for an intriguing and varied set of main characters.

Penalties: -1 for a bit of slowness in the start of the novel especially with the misdirection which might turn off readers.