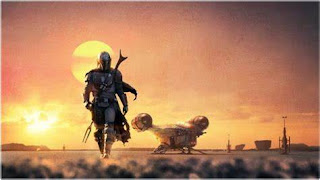 Contrary to last week, I have a lot to say about this week. Let's dig in.

There's no shortage of commentary on the Western themes of the Mandalorian, and that was obvious from the get-go, but my goodness:  Making a quasi-horror, heist episode is not what I saw coming, and I am here for it. There's a ton I love about this episode, which are things I love about the show overall, so let's get meta with it.

I adore two of the three animated shows (Resistance is hot garbage), and at several points, both Clone Wars and Rebels address big issues, and big ideas. They deal with galactic conflict, and do an amazing job of bringing those to a human level.

The Mandalorian isn't concerned with any of that; it starts with the human and works up. It deals with people trying to survive and scrape by, the people who we meet at the beginning of A New Hope and The Force Awakens, Luke and Rey, who go on to play monumental roles despite being nobodies on the galactic scale. Here, the nobodies stay nobodies. Sometimes because they lose - see the Chapter 6 - sometimes, because they just want to be left alone, like Kuiil early on.

A super early comment on Star Wars (that I am far too lazy to look up who said it) was that it was the first scifi universe that "felt lived in". So many other universes are dirtier, grittier, more violent, etc. But Star Wars isn't Game of Thrones or the like, so how does it adapt to the modern age? Even more relevant, what happens when the thing that made Star Wars, Star Wars, namely, the Skywalker Saga, wraps up?

I think The Mandalorian gives us a glimpse into what the post-Skywalker universe can and will look like - diverse, drawing from sources that inspire and elevate it to new heights, just like the influences of Lucas and company way back when it first started.

We find out next week how the Skywalker Saga wraps up - after that, who knows? There's been a lot of static about what fans do and don't like, but for this one... I like the direction things are going.


-DESR
Dean is the author of the 3024AD series of science fiction stories. When not holed up in his office  writing, he can be found watching or playing sports, or in his natural habitat of a bookstore.
Posted by Dean E.S. Richard at 12:00:00 PM