Taste of Wrath is a story of wrenching emotion handled with tact and grace. 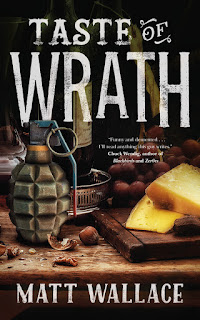 "It lasts until he has no more tears left, but no one seems to mind waiting. Everyone in this subbasement chamber has learned that's what life is largely, waiting for the tears to pass so you can move on to the next."

I often find that when I write about Matt Wallace's Sin du Jour novellas, I spend much of my time writing about how gloriously absurd they are. It's true. Throughout the seven novellas of the now completed series, Wallace has introduced some seriously jacked up stuff - whether it chicken nuggets made from actual angel meat, the truth behind hollywood's elite (goblins, they're goblins), or the meat puppets that are politicians, or...well, I could go on for quite a while if I were to attempt to detail out absolutely every bit of beautiful gonzo absurdity in these books.

Focusing on that stuff makes sense, because that's the hook. That's the stuff that has me stop what I'm reading, turn to whomever is sitting next to me (usually my wife) and say "listen to this" before I read aloud whatever bit of awesomeness I just encountered.

It's to Matt Wallace's credit that you don't know what he's doing until it's too late. He gets you with the hook, with the gonzo madcap writing. Then he punches you right in the soul and right in the heart. It was only when I was several books into the series that I came to realize that Wallace was building to something bigger and far more special than just an awesome catering event of the week story, as good as those event of the week stories were.

With each passing volume I became more and more invested in the characters as individuals, but more, as the Sin du Jour crew as a unit and a family. So, where there was meaning in the individual stories of Lena and Darren and Bronko and Moon and Cindy and Little Dove and everyone else, there was greater meaning to the story of all of them together and how they relate and how the growing threat of Allensworth would impact their collective family.

Taste of Wrath is the culmination of that journey. It is the story of a last stand, of backs against the wall with all the odds stacked against. It is a story with moments of extreme horror, including one moment that is both comedic and absolutely horrifying, to the point that I can only refer to a horde of gremlin driven POTUS meat suits and leave it at that because any further description is honestly not good for my blood pressure to contemplate. Perhaps it is my singular horror, perhaps not.


"Yes, I know. You no doubt had visions of sacrificing yourself to save another or the world or a busload of children. You all harbor those fantasies. There is no one big redemptive act, Chef Luck."

The awesome gonzo absurdity of Matt Wallace masks the deep honesty and integrity of his writing, but it is also that absurdity that helps to earn these moments of quiet grace.

All of this is to say that Wallace has earned the ending of Taste of Wrath. He's put in the work and built something exceptional with his Sin du Jour series of novellas. If the series has to end (and it does, there are only seven deadly sins, after all), somehow Taste of Wrath is the only way it could have ended. The climactic battle is there, the character deaths and redemptions are there, and it all comes together. It all fits. I don't know what perfect looks like, but I know what satisfying looks like and it looks like Taste of Wrath.

Honestly, I feel fortunate that I had the opportunity to read these books.

The Math
Baseline Assessment: 9/10
Bonuses: +1 because "How do you not tell me the baddest musical virtuoso of my lifetime is, one, alive, and two, some kind of unmatched goblin general ten-thousand-year warrior legend-type motherfucker?"
Penalties: -1 because I wish Wallace had spent more time on some of the ancillary subplots (the witches, for one)
Nerd Coefficient: 9/10 "Very High Quality / Standout in its Category".
See more about our scoring system here.