Both seasons currently available on Netflix!

It’s one of the longest-running gags in show business: cast Sean Bean in your TV series and there is an extremely high chance his character will perish by the end of season one. If in a movie, he’ll probably die heroically, indeed motivationally, spurring the surviving heroes on to greater successes; in TV series, his specter looms over the remainder of the show, meaning everything that happens from then on occurs in the shadow of his sacrifice (since he is usually innocent of any wrongdoing but is executed/killed anyway). So when I finally watched The Frankenstein Chronicles, I knew to expect a gruesome end for Bean’s “John Marlott” at the end of season one. I don’t even feel the need to issue a spoiler alert so far, because Sean Bean’s near-inevitable death early in projects is a truth universally acknowledged. 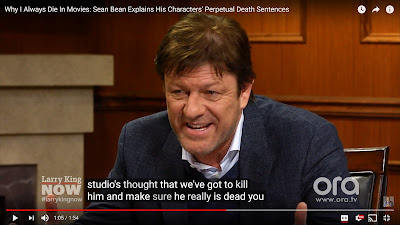 But now I must give you fair warning for the major (if extremely easily predictable) spoiler ahead: not only was I not disappointed (he is hanged), the makers of The Frankenstein Chronicles managed to jolt me out of complacency. They altered the Sean Bean death formula in a unique way, providing a (sort of) plausible pretext to have their cake and kill him too! To speak plainly, Marlott truly does die, in public, after being framed, but he is pseudo-scientifically restored to life at the very end of season one. How marvelous that the makers managed to murder Marlott but maintain him as main character (and astonishing alliteration!). This feat is surely the great triumph of this TV series.

Sad to say, there aren’t many other triumphs in this ho-hum costume drama. Bean brings his customary gravitas and Sheffield brogue to the role of Marlott, and the makers did a reasonably good job in constructing the mise en scene, recreating a broadly believable atmosphere of early 19th century Britain, but the story itself is a bit slow, and the Forrest Gump-like obsession with having Marlott bump into all the luminaries of the day is tiresome.
I hear A&E, which handled the US broadcast of this British show, dubbed it “thrilling and terrifying” and yet overall, it was neither. Here’s a more accurate epithet: “more or less watchable despite the slow pace.” Yet despite this lukewarm endorsement, I must admit I’m hooked and will finish watching season two; any show which manages to retain Sean Bean into a second season is spellbinding!

Bonuses: +2 for finding a (barely) plausible pretext for having Bean’s character survive execution (it’s like a Ned Stark do-over!)

Penalties: -1 for the plodding pace, -1 for the thoroughly irritating Forrest Gump effect

Nerd coefficient: 6/10 “still enjoyable, but the flaws are hard to ignore” for regular viewers, 8/10 for major Sean Bean fans

[For more info on our scoring system, see here.]

This snide review brought to you by Zhaoyun, ardent fan of Sean Bean’s on-screen death scenes as far back as Patriot Games and reviewer at Nerds of a Feather since 2013.