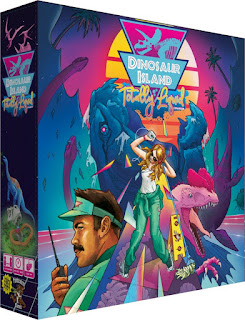 Quick break from comics to direct you to an amazing Kickstarter that you need to back immediately! Dinosaur Island is getting a water expansion and a new two player game named Duelosaur Island!!! If you missed backing the original deluxe edition of this game (which is the version you are going to want) then you have opportunity to get all of the amazing pink dino meeples to fill your theme park to the brim!! 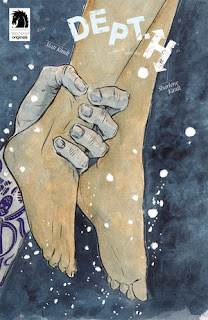 Pick of the Week:
Dept. H #24 - Matt and Sharlene's underwater mystery reached its conclusion yesterday and it was both beautiful and fitting. The work that Sharlene contributed in terms of painting each page really set the tone for this series and I love that the mystery actually unfolded in the background. It was the premise of the book, but the story was all about the development of Mia and her understanding her role in the bigger picture. It was both moving and emotional and I cannot wait to see what book Matt and Sharlene collaborate on next.

The Rest:
Babyteeth #9 - Holy WHAAAM-WHAAAM this issue is jam packed with a lot of action and a lot of the same sound effect detailing the chaos that ensues. The alarms are sounding and the underground compound where Sadie and her child are being held captive by her mother. We learn a bit about Sadie's mom and her motivation for not killing everyone, but she sadly doesn't feel this way about her daughter Heather. Trapped underground in a facility that is under attack, it isn't looking good for her unless she had access to an ungodly weapon. Man this series is a lot of fun.

Kick-Ass #2 - Our new Kick-Ass, Patience, figures out that she can make more money by robbing criminals than she can waiting tables. The change from Kick-Ass being a high-school student to a single mom who is paying her way through college really breathes new life into this series and the second issue was a delight. I fear for her family's safety with the tangled web that she is weaving, but I assume this is by design.

Star Wars #45 - It is hard to believe that this series is already 45 issues old! I remember being concerned when Dark Horse lost the Star Wars license and have been really pleased with the vast majority of the Marvel titles. After failing to convince the Mon Calamari to join the Rebellion, Leia hatches a plan that seems a bit careless. She wants to free a prisoner who will lead a mini-rebellion and become the new leader for the Mon Calamari. In order to accomplish this she needs to "borrow" someone with security clearance and not alert anyone that this individual has been kidnapped. In order to pull this off she first needs to break a shape-shifter out of a different prison.  What could go wrong?

A look back (working title)

Mind MGMT #1 - Reading the first issue of this stunning series was truly a trip down memory lane. The series started with Meru and her attempt to finish her book on the mysterious amnesia flight in which every passenger lost their memories on board with the exception of a 7 year old child and one man named Henry Lyme who seemed to have vanished. From the watercolors he painted in each issue to the hidden clues, this was an ambitious effort that Matt Kindt pulled off and is easily one of my favorite series of all time.