I'm not sure, when my parents let me stay up past 8:00 p.m. for the first time to watch a show about a medical unit in the Korean War, they meant for it to have any profound effect on me. Or perhaps they did - my mom is the biggest bleeding heart liberal you're likely to meet, so maybe that's why I got to watch it. Whatever the case, watch it I did, and I fell in love with it. 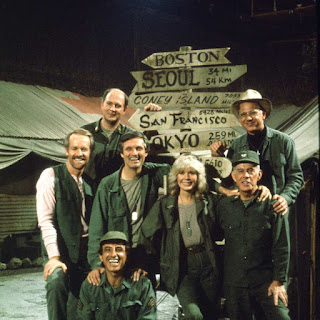 Backing up a bit - my family aren't big TV watchers. My aforementioned mother is a self-styled hobbit, very content to dig in her dirt and make massive amounts of food for anyone and everyone who stops over for dinner (that's a side quest post for another day). But we watched M*A*S*H reruns together - honestly, I don't remember if it was every night, or once a week, or just when my parents were tired of me falling asleep after reading literally all night, and it was easier to let me watch a show.

I loved that show, as a little kid, not getting half the humor. I think the first episode I saw was 'the Joker is Wild', a war of escalating practical jokes. It was hilarious, lowbrow and slapstick enough that my young mind got it. I watched it just the other day; I have seen it north of 20 times now. It's actually not as funny these days. It's better than that; a twenty minute expiration of the psyche and paranoia.

If you want to know what M*A*S*H is about, the one thing, you're left grasping for straws. Looking back, I see how much that influenced me. I have been accused of being a dichotomy - my own opposite - many times, and while I doubt that came from M*A*S*H, I think I saw myself in it. Want to make a serious point? Tell a joke. Want something to be funny? Set it against something serious. M*A*S*H does that, in spades, to beautiful, human affect.

I doubt on that weeknight that I got to stay up two-and-change decades ago that my parents thought I'd watch that show again. After graduating a local college, I left that house, though, and, as I said, didn't watch much TV - I didn't have cable, or even an actual TV. But every paycheck from my new Real Job, I bought another season of M*A*S*H on DVD.

I still watch them, even though some of the episodes skip, and I recently (a couple years ago) discovered you can turn the laugh track off, and that infinitely improves the show.

I'm not sure what they intended, but I doubt my parents thought I would ever seek out cast and crew members at book signings or events, and greet them like they were old friends - because they were. The most amazing thing, though, is that those people, who influenced countless lives, who were part of revolutionary, groundbreaking television, were just as happy to greet me in kind.

I grew up with Star Trek and Wars, Babylon 5. I've seen Firefly nearly as many times as M*A*S*H, and I feel a kinship with all of you who feel those people are family, because they are. It's one of the things that, to me, to the point which is the title of this site, is so great about being a nerd. We're all excited by and for the same things. We really do feel like family, to people we've never met.

David Ogden Steirs died last Saturday. Charles Emerson Winchester is one of the roles he will be remembered for; it certainly should not be the only one. I never got to meet him. I hope you'll permit me to ramble for a moment, but last year, Carrie Fisher died. I wrote the... post? Eulogy? Whatever? for her on this site. To borrow a sports cliche, I tried not to do too much with it. For the first time in my life, Leia was gone - Carrie was gone.

I never met her. I never met David. But there is a very small collection of individuals who poured themselves into their work - not in the sense that they worked hard to portray a character; those are myriad; no, these are people who allowed themselves to shine through into their work. The stories from the set of M*A*S*H tell the story of the dedication they all had, not simply to their craft, but to the philosophy and message, is singularly unparalleled.

With your very kind permission, I am going to make myself a martini and toast my old friends with whom I was privileged to grow up, and who I learned so much from.