SIDE QUESTS: Synthesizers, A Love Story

Today's episode of SIDE QUESTS is more than a little personal. That's right, it's about my favorite inanimate objects: synthesizers!  - G


What Are We Talking About?

A synthesizer is an electronic instrument that produces sound waves. The earliest and basic method is called analog subtractive synthesis. An oscillator produces sine, square and/or sawtooth waves with electrical current. A filter and envelope generator then cut into, or subtracts from, the waveform to alter the sound. With the advent of digital synthesis in the late 1970s, new forms of synthesis became possible, including wavetable, FM (frequency modulation) and S&S (sample and synthesis).

The synthesizer has actually been around since the 1930s, but didn't really catch on until Bob Moog's voltage-controlled synthesizers made their way into studios in the late 1960s, and onto albums by Simon & Garfunkel, The Beatles and The Monkees. By the mid-1970s, synthesizers were a thing, though it wasn't until the 1980s that they threatened to displace the sainted guitar.

Nowadays you hear far more music made with synthesizers--or samples of synthesizers--than with guitars. That's a sad fact if you're the kind of person who yells at clouds and hates Millennials because they love avocado toast and refuse to spend money on Budweiser or Applebees. For someone like me, it's bittersweet. I love the synthesizer, and am proud of its ascendence to the pinnacle of music making; but I love the guitar too.

So, basically I've been obsessed for as long as I can remember. Why? Because, in their purest form, synthesizers don't sound like anything you make with strings, reeds or stretched out skin. They sound like the future. They still sound like the future, even though now it's more often the future we dreamed of in the past.

I don't know how it started. I certainly didn't get it from my parents: my dad mostly listens to classical music and a smattering of rock and folk, while my mom refers to all music as "noise." But my dad did have the Vangelis album Spiral on vinyl--in retrospect, that was probably ground zero.

Flash-forward to 1983. We were just getting music videos at that time--not on MTV (no cable), but on weekly shows that came on just after the news. If I was lucky enough, I could watch half before my parents shut the TV off and told me to get ready for bed. Those shows played a bit of everything, but the only songs I remember were the ones with killer synth lines, like "Jump" and "The Message."

The school I went to had a really strong music program, and in the music room, they had a Casio CZ-5000 and a Roland Juno 106. Whenever possible, I'd sneak in early and move the knobs and sliders around. I didn't know what I was doing--I was just a dumb kid. Most of the time, I ended up playing the baseline from "Blue Monday" on the Juno, or some Flock of Seagulls chords on the Casio. 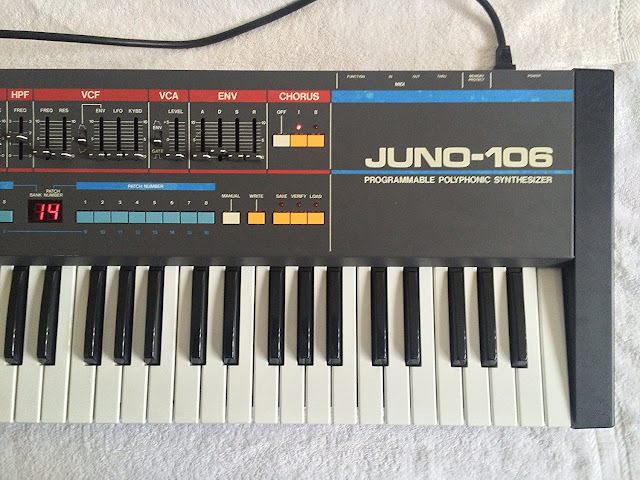 In 1991, I finally convinced my parents to go halfsies on a Roland D-50. My keyboard teacher, Carl, assured me it was the "best one in the biz," and that his guy could get me an unbeatable price. I adored Carl, who was an old timer from the northside of town--an area mostly known for red sauce joints and organized crime. So I mowed lawns and shoveled sidewalks until I'd earned half.

Now, $500 in 1991 was a lot, but it wasn't a lot for a new Roland D-50. Looking back, I've often wondered if my synth just fell off the back of the truck, as they used to say. More likely, Carl's guy just wanted to liquidate stock. After all, by 1990 the D-50 was out of production and had been emphatically replaced by the mighty Korg M1. 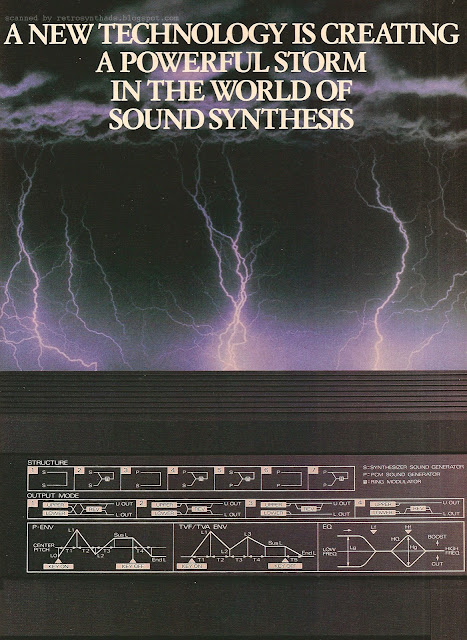 The Roland D-50 used something called Linear Arithmetic (LA) synthesis, which was proprietary speak for "sample and synthesis" (S&S). What that means is that the D-50 paired the attack transient from 8-bit samples (think the precise moment a trumpet blares or a mallet hits a xylophone) with the decay, sustain and release from a synthetic waveform (think everything that comes after that moment). It sounded otherworldly--and in fact, you'll recognize the D-50 from basically every late '80s New Age cliche ever. Perhaps the most iconic use of the D-50 was on Enya's 1998 song "Orinoco Flow," which used the Pizzicato Strings patch.


Unfortunately for young teenage me, the D-50 was also brutally difficult to program. Unlike the Juno 106 we had at school, you had to go menu diving to make anything happen--there was nary a slider or knob in sight. But I didn't care--I had my first synth.


The Music of Futures Past

A lot was made with really cheap gear that had been repurposed from its original intention. For example, the Roland TB-303 Bass Line--a cheap-looking plastic box with a single oscillator designed to provide accompaniment for practicing guitarists. It didn't sound much like a bass guitar, and was kind of a pain to program. But it did have this wonderfully squelchy filter and a characterful way of tie-ing notes together. In 1987, a producer from the South Side of Chicago named DJ Pierre discovered that sweeping the filter along short patterns created an irresistible hypnotic effect. Techno producers from Detroit (and, later, New York, Canada and Europe) achieved a similar effect with other synths, including the same ones I'd used from school--the Roland Juno 106 and the Casio CZ-1000. I can think of no better vision of the future, as seen from 1997, than "Organa" by Dutch producer Steve Rachmad:


I started making my own techno in 1996, though I never really finished anything. I had a mental block--a fear of failure, I think. Basically, if I never finished anything, then I never had to experience the pain of rejection. So I'd muck around, make loops and then fuck off for a few months at a time. Looking back, I regret that I wasn't more serious and driven from the get-go.

That changed in 2015, when I discovered synthwave. Actually I already knew Kavinsky and College, who are widely credited with inspiring the genre. But I didn't realize there was this whole scene of people inspired by magenta-tinted '80s retrofuturism.

That changed soon after we began our series Cyberpunk Revisited. I was re-reading Neuromancer, Mindplayers, Software, etc. and I wanted to find something that captured the mood in musical terms. I found a couple cyberpunk playlists on Spotify and immediately got shoved down the rabbit hole. Makeup and Vanity Set, Perturbator, Miami Nights 1984...I couldn't get enough. I was hooked.

Slowly but surely I got back into making music, and found that--with kids and far less free time--I suddenly had the drive and discipline that had been missing during my 20s and early 30s. I started finishing songs, decorating them in lush, lovely synth tones--I even released some of them. And then made an album!


Synthesizers: The Greatest Thing on Earth

The 106 features a single digitally-controlled analog oscillator (DCF), which means it produces sound via electrical current but also features an electronic pulse that keeps the oscillator in tune. It has a single digitally-controlled filter (DCF), a single envelope generator, which modulates both amplitude and the frequency cutoff on the DCF, and a single low-frequency oscillator (LFO), which can modulate either pitch, pulse width or the filter cutoff. The 106 also has a silky smooth chorus effect that makes everything sound like gold. So while the 106 has a more limited feature set than some of the other synths I'll talk about, it's almost impossible to make a bad sounding patch with it. It has been called, rightly in my view, the ultimate beginner's synth. And boy does it sound lovely...


Next up is the Oberheim OB-8. Released in 1983, the OB-8 replaced the more famous OB-Xa (made famous in "Jump"). For my money, however, the OB-8 is the best of the bunch. It featured two voltage-controlled analog oscillators (VCOs) per voice, with 8 total voices of polyphony, a Curtis ladder-design voltage-controlled filter (VCF), two envelopes and a whole junk ton of LFO modulation capabilities. You can also pan individual voices across the stereo field (i.e. left to right speaker), leading to some seriously out there stuff.

The last hardware synth I'll present for you is brand new, the Korg Prologue. It's not out yet, but I've had the pleasure of playing one in the shop--and let me tell you, it is mighty fine. The Prologue features a pair of VCOs, a VCF and two envelope generators, but also has a digital multi-oscillator that can do simple FM or wavetable synthesis. What that means is that you can do classic analog, '80s digital or more complex patches that blend the two.


Of course, one of the great things about being alive today is how cheap, convenient and good software synthesizers have become. Some are truly excellent, like Diva by Germany's u-He: a synth that lets you mix and match modules emulated from various classic pieces of kit. It can even simulate the character analog synthesizers pick up as they age...bad tuning and oscillator drift! Here are a couple videos made by my favorite sound designer for Diva (and now friend), Swan Audio. The first is a synthwave track using sounds be made for the preset pack Analog Hits, and the second are his OB-8 recreations, which sound amazingly realistic if you ask me.


Well, that about wraps it up! But just for good measure, here are a couple love songs I've written to the synthesizer. Enjoy!