SIDE QUESTS: Fonts and Typefaces!

Nerds of a Feather, Flock Together. The name kind of says it all. Collectively, we share a love of science fiction, fantasy, and horror — and the tendrils that both braid those together and simultaneously allow them to branch out in so many different directions. But while Nerds of a Feather is a genre blog, as individuals we're nerds about way more than just science fiction and fantasy. SIDE QUESTS is a new essay series where we explore some of the other stuff we geek out about. A nerd cannot live on but sci-fi and fantasy alone...though it's certainly fun to try.

Today, friends, we're talking typefaces and fonts. I know there's a difference between the two words, but I don't want to be pedantic, I just want to share the joy of making letters in slightly different ways. Who knew there could be so many!? For today's purposes, I'll be using "font" because it's the more prevalent term in the parlance of the times.

At what is probably the most fundamental level, you have two varieties of fonts: Serif and Sans Serif. A "serif" is the little embellishment we find at the terminus of a line, like the little flare at the bottom of a "t." What you're reading now is a serif font. In general, serif typefaces are thought to be more readable, so the vast majority of books and magazines will use a serif font for their body text. A couple examples probably everybody's familiar with are Times New Roman and Garamond. Serif fonts aren't afraid to linger a little, to take just that tiniest little moment to put a little flourish on the otherwise rote exercise of, say, writing an "R."

Sans serif fonts, or gothic fonts, don't have time for any of that ornamental nonsense. They're all about precision and control. They're clean and efficient, and their eyes are on the horizon — not for the sunset (save that for the serifs), but for the future. The archetypal gothic font is Helvetica. Starting in the late 1950s, Helvetica became the go-to font for logo designers because its clean, spare lines seemed to capture the essence of living in the jet age. Apple computer licensed Helvetica and it is the default font on Apple devices. Microsoft didn't want to license it, so PC users got Arial, or "Crappy Helvetica." It just doesn't have the same grace and balance of Helvetica.

A capital "F" is always a (more or less) vertical line and two (more or less) horizontal lines (more or less) intersecting it. On my computer, I have 956 typefaces. They all make that capital "F" in a different way. Some are almost identical to others, some are wildly different. The limitless variety of ways that designers have found to make letters while keeping them recognizably letters is bewildering and, for me anyway, a testament to our endless creativity, and our ability to create beauty and express our personalities even when working within narrowly defined limits. 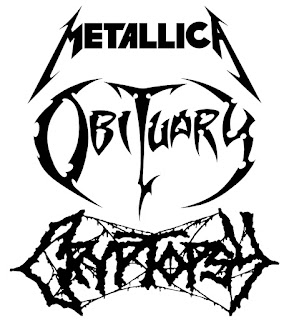 I fell in love with fonts at the same time that I stumbled into design, which was in my late teens while playing in a metal band. There were cassettes to be made, and inserts to design, and eventually, a CD to make and design. I didn't do a great job. BUT! The world of metal is a tremendously valuable case study. Metal — like sci-fi and fantasy and horror — is littered with sub-genres. So, so, so many. So, take a look at three typography examples. These are all metal bands, and, from top to bottom, they get more extreme. You can see that in the logos. Black metal has gotten bonkers about the ornate, illegible logos, and that's a fun tangent to explore on its own. But the fact that simply a typeface can act as a logo — not just for bands, but for products and services, giant corporations and the little restaurant on the corner — points to the thing that I think I find most meaningful and intriguing about fonts:

The choice of font can convey elegance or earthiness, optimism or pessimism, momentum or rigidity. A million different things. Fonts can conjure images of the past or capitalize on the promise of the future. They can help us tell our stories better, and they can allow others telling their stories to manipulate us (no negative connotation implied...but, you know, be wary). So in my humble, geeky opinion, we would all do well to have at least some understanding on how something as "simple" as a font can have an impact on our emotional reactions to something that we are presented with out in the world, in a store, on TV, or on the web.

It's also worth thinking about how the fonts you use say something about you. It's not an accident that I described serif and sans serif fonts in terms of personalities above. If you choose to employ Copperplate Gothic Bold, for instance, people might assume that you never made it out of the 90s. Fair warning. If you use Comic Sans, you are announcing to people that you don't have great taste, and that you also don't know what comic lettering actually looks like. And Impact is now forever "the meme font." Unless you're making a meme, or a fake meme, or a meta meme, use it at your peril.

We Are Not Alone

There are so many great resources about fonts and typography. Here are some that I enjoy, and you might, too:

Posted by Vance K — cult film reviewer and co-editor of nerds of a feather, flock together since 2012, sometime designer, musician, Emmy-winning producer, and all-around rabbit hole dweller.
Posted by vkotrla at 12:00:00 AM