Another stellar novella from Matt Wallace, this time taking on the absurdity of Washington. 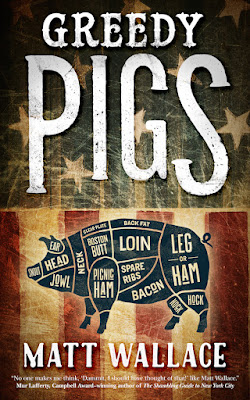 One of my favorite things about the Sin du Jour novellas is that at least once per story I have a moment where I need to stop, sit back, and say "Seriously, Matt, what the fuck?" I have to pause in marvelous awe at what Matt Wallace wrote. Often, it isn't the main course of the story (though, that too is generally amazing), but the garnishment of the presentation. I do not apologize for using food metaphor when writing about Greedy Pigs.


Mr. Mok suddenly springs to his feet. "Panda agents of pure evil! Panda most vile creature ever to walk the Earth!"


"Panda War great and terrible," he mutters to himself. "Panda War last centuries. Kill millions. But no Wikipedia page, no happen. Only thing worse than panda is Internet."

Glorious. It is simply glorious. As is nearly everything that follows.

In the quiet early moments of the novella, before everything goes pear shaped, we get to see an aspect of Bronko that not only have we never seen before but that wouldn't have been as meaningful as it is now if we didn't go through the romps of the first two stories and the escalation of the last two. The reader has been conditioned to see Sin du Jour as a series of high profile catering jobs each with an aspect of some sort of insanity regarding or who what is being served. The behind the scenes action of the company is something else because it shows that Bronko is plugged into something bigger than just running a catering company for the supernatural. This isn't suggesting that Bronko is somehow leveled up to a different level, but more that he cares. He cares.

The catering job for Greedy Pigs is set to be for the not-exactly-human who won the election to be the leader of the supernatural Shadow Government. That inauguration happens to be on the same day as the one for the newly elected President of the United States. Yes, that one. Matt Wallace is timely.

Matt Wallace also has a great sense of the absurd that is so absurd it becomes plausible. I'm not going to spoil the surprise, but somehow the team manages to cater both the Shadow Government inauguration AND the US Presidential Inauguration. There are cameos a plenty without actually dropping names, but we know exactly who Wallace is writing about in almost all cases, but that's not the fun bit. The fun bit is the absurdity revealed during the inauguration of the US President. It's worth waiting for.

Everything in Greedy Pigs is worth waiting for, as much as I enjoy talking about the absurd and the insanity of Matt Wallace's fiction I would really be doing Wallace a disservice if I didn't at least mention that for as inventive and as much fun as the Sin du Jour novellas are, Wallace goes to some pretty dark places with his storytelling.


His voice becomes very far away. "We burned them. All of them. High tech thermite. Next-generation shit. Quick and horrible. We burned them all alive."

This may be perhaps one of the darkest things Wallace has written about in such stark terms (remembering, of course, that Envy of Angels did feature the slaughter of an actual angel for food), but the darkness is earned through the completely rational absurdity and the strong characterization over the course of several volumes. When a particular character tells the above story, it is earned and it matters. It is earned through the small moments and the throwaway comments and when Wallace delivers, he hits you right in the gut.

It's that gut punch, blended expertly with unmatched wit and creativity that makes Greedy Pigs so damned good.

And, if we need to talk more about gut punches, I'll close with this bit of wisdom from Matt Wallace.


It only confirms a theory she's long held: having six-pack abs makes you evil.


The Math
Baseline Assessment: 9/10
Bonuses: +1 for some presidential history.
Penalties: -1 because you'll probably be cranky about how Darren is handled.
Nerd Coefficient: 9/10 "Very High Quality / Standout in its Category".
See more about our scoring system here.