On Thursday, I actually went up to the Funko store in Everett to grab some exclusive for our very own Mister Newhouse-Bailey, my brother in silly toy collecting, as well as for my friend who runs Collect it Here, a collectibles shop which I will blatantly plug now. This was really exciting, because I hadn't actually been to the Funko shop yet.

But seriously, the shop is an event unto itself. 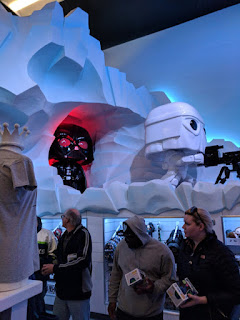 Saturday and Sunday I spent at the con, and I'm just going to sort of-apologize for not taking many pictures. As you can see up above, it's not my greatest skill in life, it was crowded as hell, and there are lots of outlets with very expensive cameras and professional photographers that took loads of pictures, if you want visuals.

Saturday was my day to mostly wander around (even once I got inside the con, since I ended up parking, I am pretty sure, further away from the convention center than I actually live). The cosplay was - as per usual - amazing (my own cosplay consisted of "doing my hair slightly different and wearing my jacket that everyone says looks like Wolverine anyway". No, you don't get a picture.). There are some great roundups of the cosplay on io9 and SyFy wire. The highlight of the cosplay, for me, was a spot-on Last Jedi Leia, which, how do you even put that on without sobbing? My goodness.

Also receiving votes: pink-bonnetted Mal, tiny Rey & Kylo,and anyone who wore a costume that didn't cover a lot, because it was really cold.

Sunday was more geared towards art, games and shopping. Artist Alley featured its usual assortment of people far, far more talented that I, so that was annoying.

If you like impossibly adorable stuff, check out Little Brigade. I mean, seriously. 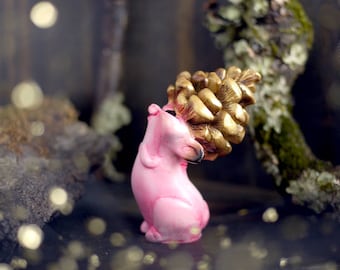 I'm only human. Take my money.

On the less cute side of things, Mike Manomivibul caught my eye with some really clever, almost-surreal work. Outstanding in my eyes was Geoff Pascual's watercolors. There is just something about this style I adore. - and the images online (like most art) really don't do them justice.

(not appearing at the con, but you should also check out Megan Levens)

If anyone wants to buy me a set of Norse Foundry dice, I will love you forever. PROMISE.

Which actually segues nicely into the part I've been avoiding, which is that I spent most of the day Sunday just playing board games. Which was super fun, but not exactly riveting to read a description of me trying to remember how to play Arkham Horror since I haven't played it in years. On a related note, Arkham Horror game night, my place. Who's in?

In all seriousness, we've moved so far beyond Comic Cons being about comics. If that's your thing, there are a million booths with (what I presume are) awesome comics. I'm not super into comics, and I could have spent a week playing games with random people and spending far too much money on toys and art, and there still would be more to do.

ECCC has done a great job of running an organized, clean and (hopefully) safe and inclusive con (I'm a white guy, so I can only speak to this so much).

Dean is the author of the 3024AD series of science fiction stories (which should be on YOUR summer reading list). You can read his other ramblings and musings on a variety of topics (mostly writing) on his blog. When not holed up in his office writing, he can be found watching or playing sports, or in his natural habitat of a bookstore.
Posted by Dean E.S. Richard at 12:00:00 AM