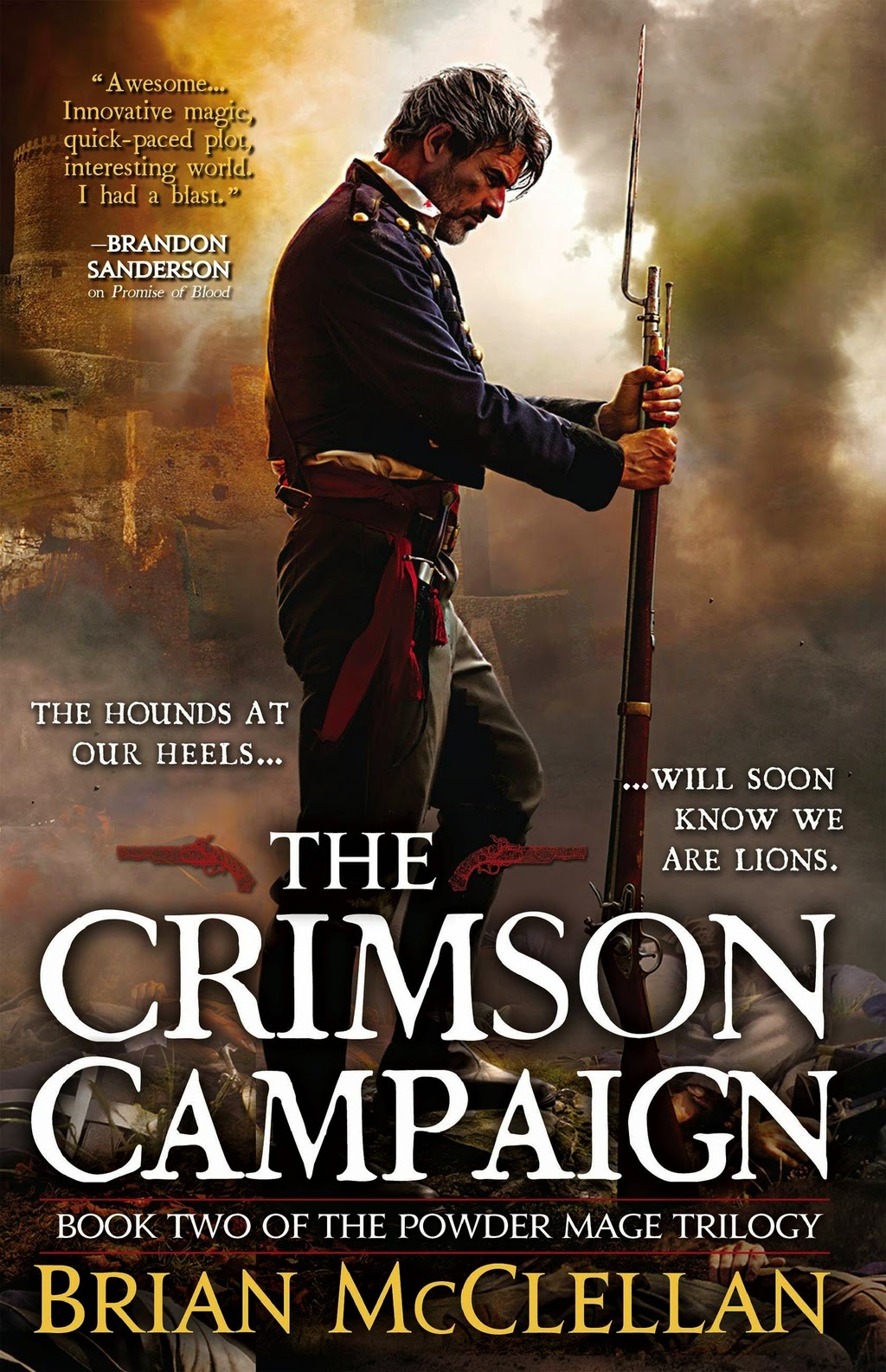 To be completely honest, I'm torn by this book. After my not-so-positive review of McClellan's first installment, Promise of Blood (see my review here), which did not come close to meeting my expectations considering the buzz the book had generated,  I had not planned on continuing on with this series. That might have colored my expectations to begin with. As expected, The Crimson Campaign continues the same problematic trends from the first volume of the series. And I have the same litany of complaints about anything from the world's weak treatment of women to unbelievable character attitudes and to darkness for no other purpose than to let the reader know how dark the world is (the severed fingers still bother me). But, on the other hand, I found The Crimson Campaign to be a quick and enjoyable read. At times, a real page-turner. So I am at a loss at how to grade this second installment of Brian McClellan's new flintlock fantasy trilogy.


The Crimson Campaign picks up right where Promise of Blood left off. Field Marshal Tamas is in the process of spearheading the Adran invasion of Kez, but soon finds himself (and his powder cabal) deep behind enemy lines, drastically outnumbered and pursued by superior forces, with little chance of escape. So dire are his circumstances that Tamas is widely believed dead. Meanwhile, after weeks in the Gurlish mala dens attempting to smoke himself into oblivion, Taniel Two-Shot emerges as the last line of defense against the advancing Kez army. And to his surprise, he soon learns that this army is perhaps guided by Kresimir, the very god Taniel thought he had killed. On the home front, Inspector Adamat continues his quest to rescue his wife and children from the enigmatic and undoubtedly evil Lord Vetas. In the process, he runs into the weak and indecisive maid/laundress Nila, a woman who may turn just out to be more than she appears to be.

The Crimson Campaign still features a well-paced, action-packed ride through the wilderness of Kez, the mountains of Deliv, and the Adran capital of Adopest. Although the prose does not reach the heights of such newcomers to the genre like Peter Higgins, each storyline has enough twists and turns to keep the reader's attention. Pacing is by no means an issue with this series. The Tamas storyline in particular reads like Paul Kearney's fantastic tale, The Ten Thousand. Moreover, The Crimson Campaign also gave McClellan the chance to develop some of the side characters in fascinating ways. I appreciate how the Privileged Bo has developed throughout the novel, and the Nila storyline has finally become interesting.

The series, however, still suffers from the very same problems I noted with the first volume. First, at times there is needless gore that serves no other purpose than to be gory, needless grit that only serves for the sake of being gritty. This is something that we at Nerds of a Feather have complained about again and again (see here for The G's rant on the topic). More strikingly, an annoyingly weak treatment of women abounds throughout the novel. Even the most powerful of women suffer from some affliction. Ka-poel is a sorcerous being with the power that could rival gods, but she is a deaf-mute, and is interpreted only through her relations with her protector, Taniel. And that relationship is mind numbingly colonial, with Taniel needing to come to terms with the fact that she is a person to be loved and respected, not merely a savage. But although she may have ideas and power, she has no voice of her own (yes, she's our very own subaltern). And need I mention that she becomes the object of male lust in a not-too-savory way?

Moreover, I found Tamas to be the least compelling main character I have read in quite some time. Tamas loses perspective far too often for someone touted to be the most feared Field Marshal throughout all the realm. For instance, he is said to be a widely respected leader, but Tamas takes way too long to come to terms with the fact that Vlora cheated on his son and ruined their engagement.  He even takes his anger at Vlora out on the men under his command! Making matters worse, the substandard backstory introduced midway through the novel (the very reason Tamas launched his revolution against the throne) only works to make Tamas seem petty. And it is for his pettiness that the world now has descended into chaos. I am hopeful that McClellan plans to surprise us and take this in a new and exciting direction, but I don't plan on holding my breath.

In the end, I think this series will find its audience. And yet again, I find myself convinced that I am not it. Although an enjoyable read and a real page turner at times, The Crimson Campaign still leaves much to be desired...

Bonuses: +2 for always keeping my attention.

Penalties: -1 for the continuing misogyny; -1 for Tamas and his backstory.