I tend to binge read fantasy. Until age 16 I couldn’t get enough of the stuff—from the gateway grub of David Eddings and Dragonlance to higher-grade fare from LeGuin, Kurtz, Leiber and Zimmer Bradley. I read countless Tolkein clones, until Tad Williams’ excellent Memory, Sorrow and Thorn had the last word in that conversation. I even read six or seven Wheel of Time books, ultimately concluding that it should have been a trilogy.

Then I discovered literary fiction.

I credit/blame a forward-thinking high school English program for my conversion from fantasy. We read Raymond Carver and William Faulker, Toni Morrison and Tim O’Brien. We even read Jesus’ Son by Denis Johnson—the one about heroin addicts. These books were beautiful, powerful and unflinching, the kind of books that grab you by the shirt and say: “look around you, this is the world you live in.” Fantasy seemed childish, trite and unsophisticated in comparison.

My genre consumption shifted towards science fiction, which seemed (as it often does) the more serious half of SFF. I dove into the mind-altering depths of the New Wave, devouring the work of J. G. Ballard, Thomas M. Disch, Samuel Delany and Philip K. Dick. Ursula LeGuin was a carryover, of course, though by now I'd graduated from Earthsea to Hainish. I returned to the classic science fiction I'd first discoverded as a child, finding that some (e.g. The Stars My Destination) stood up to the test of time while others (e.g. Foundation) did not. I continued to avoid fantasy like the plague.

Enter Jemmy, now a fellow Nerd of a Feather but at the time a friend and co-worker. At lunch we’d head off to one of the many bookstores in walking distance from our office, gravitating to the science fiction and fantasy aisles. Inevitably our conversation would turn to the tragic fact that I’d never read anything by Octavia Butler or George R. R. Martin, and how this needed to be corrected as soon as humanly possible. I bought copies of Parable of the Talent/Sower and Lilith’s Brood, and loved them all.  But I couldn’t bring myself to do the same for A Game of Thrones--it was fantasy, after all.

Then one day, Jemmy up and bought me a copy, casually informing me that I no longer had any excuse for not reading it. Still I hemmed; I hawed; I resisted. Until one night I just sort of picked the damned thing up—and never looked back.

A Game of Thrones wasn’t a perfect book, but it was a gripping political thriller high on intrigue and low on magic. I blasted through the even better sequels, A Clash of Kings and A Storm of Swords, eventually moving on to the not-good fourth and fifth volumes. Again I concluded that an overlong fantasy series should have been a trilogy, though it didn’t bother me much this time. The bleak perspective resonated with many of the things I saw going in our world—a feeling punctuated by the early 2000s zeitgeist of ethnic cleansing, terrorism and “enhanced interrogation techniques.”

From there I moved on to the other luminaries of gritty fantasy: Joe Abercrombie, Glen Cook, KJ Parker, Gene Wolfe. I ate the stuff up, and reveled in the visceral thrills of fantasy that walked in the shadows and probed the darkest recesses of the human soul.

Only, after a while, the gritty stuff started to get repetitive too. Formulaic, even.

My frustrations with fantasy resurfaced. I’d already had it with pig farmers fulfilling prophesies, “noble savage” elves and all the other clichés and tropes of the neo-Tolkein canon. I make an exception for Andrzej Sapkowski, because he, well, subverts everything. But exceptions—or more accurately, the fact that they are exceptions—can prove the rule, so to speak.

But now even gritty fantasy, once a refuge from the neo-Tolkeinic morass, proved equally capable of being cheap, generic and derivative. Worse, there appeared to be an arms race of sorts in the works. I still wanted my fantasy to explore the darker recesses of the human experiences, but I wanted it to mean something. I certainly didn’t want or need anyone to amp up the grit-tay just to out-do the last guy. And I'd had it with offhand rapeyness and tortureporn serving no purpose other than to announce the grimmmmmm darrrrrkess of a fantasy world.

I began to think about the things I wanted to see more of in fantasy. First on the list was more fantasy that, like recent work by Elizabeth Bear, NK Jemisin, Saladin Ahmed, Scott Lynch, Doug Hulick and Django Wexler, leaves the crowded shores of pseudo-medieval Europe (or more accurately, pseudo-medieval Britain and Ireland) for different spatial, cultural and temporal planes. The world was a big place and history is full of rich veins of inspiration. I didn't want anyone to be lame and appropriative, but I did want more fantasy authors to discover the rest of the world, and to explore time periods on either side of the Middle Ages.

I wanted novel geographies, topographies and physical environments. I wanted more experimentation with (or at least problematizing of) social relations. And I wanted authors to spend more time exploring consequences, intended and unintended, of human action arising from relatable, understandable motivations. The best fantasy already does at least some of these things, but there’s still so much ground to cover.

I began to wish authors would go back to the actual medieval and Renaissance periods in order to develop more sophisticated models of religion. Religion in fantasy, after all, tends to come in two flavors: literal and cynical. Gods are either actually walking the land and doing things (mostly bad) or are totems every intelligent character understands to be superstition and little else. But religion is often experienced as a lived reality: no gods walking the earth, but life lived as if they might as well be. This idea was very interesting to me—and another under-tapped vein that could be utilized to great effect.

I grew certain that new and better ideas could save fantasy. I really wanted to love Glenda Larke’s new book, The Lascar’s Dagger, because it hits on so many of these things. It draws inspiration from the mercantilist period, when the Dutch and British East India Companies competed for spices and slowly committed resources to colonial ventures they couldn’t afford (which enticed the Dutch and British governments to intervene and outright conquer much of Asia, the beginning of a much more expansive and destructive phase of international colonialism).

It features a novel, polar geography, where the overland route to the Va-Cherished lands (i.e. alt-Christendom) pass through the North Pole. Trade is dominated by the Pashali, who have mastodons, but the enterprising merchants of Lowmeer would like very much to cut out the middle man. Discovery of the sea-route to the Spicerie (i.e. the alt-Malay Archipelago) also uncovers magical riches to be exploited. Larke thus invites us to consider the history of colonialism as it might have played out if magic had been involved—a fascinating idea that she makes good use of throughout the book.

On a personal level, I absolutely love that Larke develops characters based on the Malay world (an area near and dear to my heart) and does so in a generally classy and respectful way. Oh, and did I mention that religion is embedded into the very fabric of everyday life—even for the educated elites? Yes, The Lascar’s Dagger is certainly full of good ideas.

And for a novel written by a woman whose characters explicitly question the patriarchy of their social environments, the female characters are surprisingly unlikable—from the narcissistic and shallow Princess Mathilda to the always-grumpy Sorrel Redwing and annoyingly coy Pontifect. This struck me as odd.

Reading The Lascar’s Dagger reminded me of a conversation script that most science fiction fans have witnessed or been a part of at some point in their lives. You know the one:

This is a common approach to genre—that bad writing is tolerable as long as the concepts are good. And most people just accept it--not only fans and readers, but authors and critics as well. Too often, when we discuss, debate and argue a book's merits, we fixate on the conceptual matter. Did it say something meaningful? Did it try something new? Did it meet or fail to meet a bar of acceptability as far as philosophy and social vision go?

These are important questions--important to me as well as to others. But fixating on ideas can overshadow equally important questions on fundamentals. Ideas, simply put, are just not enough—no matter how thought provoking they are. And by defining SF/F as "ideas fiction," we conspire to keep it in its literary ghetto. Really good SF/F, and by "good" I mean something of cultural impact and lasting value, is not born of vision alone, but through the execution of that vision. 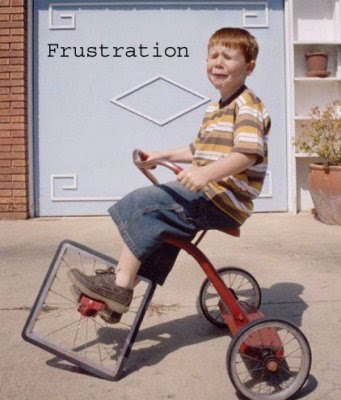 In the end, this is what makes The Lascar’s Dagger so frustrating to me. I wanted to love this book—I still want to love this book, and in some respects I do love this book. After all, the ideas really are really, really good. Unfortunately, the fundamentals aren't.

Look, not all authors are Pynchon and not every book needs to be Gravity's Rainbow. But as much as we, the consumers, could have asked for more, someone on the production side could have recognized the seed of a great novel in this passable one, and nurtured it so it could flower into the thing it clearly wants to be. Justin Landon has recently called attention to this as a general problem facing genre publishing—and the experience of The Lascar’s Dagger really put that into perspective. There are a lot of writers out there with one half of the equation down pat, but who need more and better guidance to unlock their full potential. This is what traditional publishing is supposed to bring to the table.

Why isn't this happening? Like most problems in a capitalist economy, it boils down to issues of supply and demand. The business model of traditional publishing, you could say,  is like diamond mining: you extract as much carbon as you can and hope you get enough diamonds in the process to make the venture worthwhile. Cash-strapped publishers just aren't going to invest the time and money raising the diamonds to carbon ratio unless they feel it's either: a) necessary to their survival; or b) a conduit to greater revenue and profitability. Because the crisis in publishing is long-term, incentives to boost revenue by bringing more quantity to market faster wins out over incentives to raise quality--a slower process with less-certain results.

Now, you may ask yourself why I'm being so negative. Here's why: I have dedicated a lot of time and emotional commitment to fantasy, science fiction and traditional publishing. I believe in fantasy and science fiction, just as I believe in traditional publishing. It is my firmly-held opinion that traditional publishing is, and will remain, the most consistent and efficient route to quality product. I've come to know good, hardworking people at Orbit, Tor/Forge, Solaris, Jo Fletcher and the rest of the specialty imprints. I think they are awesome and do awesome things. And I've read a lot of really high-quality books they've brought to market.

But this isn't the '90s anymore, and even if the crisis is long-term, it's very real. If traditional genre publishers are going to hold position and even grow in this era of crowdfunding, self-publishing and the return of the small press, they will need to assert their role as developers of talent--mentors and coaches who can consistently turn promising into good, and good into great. They will need to take potentially diamondiferous material like The Lascar's Dagger and turn them into brilliant gemstones. This is how traditional genre publishing will survive, and even prosper, in the new literary economy. That's good for everyone.
Posted by The G at 12:00:00 AM