Microreview [Book]: The Last of the Smoking Bartenders 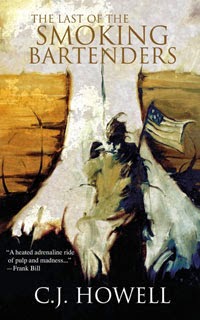 Tom is on a mission in the desert of the American Southwest. He’s out to stop the illusive Network from carrying out another terrorist attack. In order to defeat the Network, Tom has gone off the grid, erasing his identity and even avoiding handling paper money—something or other about micro-tracking devices on the bills. Tom’s so deep underground, he’s  a homeless transient, a foul smelling bum. Along his journey west, Tom hooks up with a young drifter, Lorne, and inadvertently enlists him in a little arson and murder. This brings the duo to the attention of Hailey, the only federal agent in this desolate section of the Southwest. Tom’s quixotic quest ensnares others along the way—a crew of Navajo tweakers, a goitered psychopath, and, for a brief moment, the last of the smoking bartenders. Hence, the genius title.

The Last of the Smoking Bartenders is an uneven novel. In many respects it is unlike much of contemporary crime fiction, in all the right ways. C.J.Howell’s writing is lucid and economical, his characterizations strong, his violence shocking, and his philosophical excursions fitting in this post-True Detective landscape. But the book suffers from an unfocused, often meandering plot.

The novel is effectively a chase: Lorne and Hailey are both trying to catch up with Tom, Lorne to assist him in taking out the Network, Hailey to arrest him for setting fire to an abandoned mine and killing a security guard in the process. After a strong first third, however, The Last of the Smoking Bartenders loses steam, becoming bogged down in Tom’s wanderings. This section of the novel is salvaged somewhat by thoughtful considerations of homeless living and human altruism—and some brutal violence, tersely written. It picks up again in toward the end, though the last twenty pages seemed to be unnecessary after the violence that ended the chase.

C.J. Howell, however, made many wise choices. First, though he set his novel in the Utah/Arizona dessert, Howell embraced a more subtle approach to the region’s meth-fueled criminal class. His scaled-back, stark depiction stands in marked contrast to the heavy handed, often cartoonish portrayals of tweakers common to Southwestern noir. (Even Breaking Bad suffered from a bit of this.) The characters are still insane, but more realistically so. They do drugs—and drink—but feel the effects. And, unlike your average noir P.I. or other stock psychopath, the drugs and booze affect the characters' behavior. Adversely.

Second, Howell takes a similarly realistic approach to FBI Agent Hailey. I need not rehash the argument that the depiction of women in noir is often misogynistic. Women are also, and more generally, depicted unrealistically, particularly when the character is against type. Hailey isn’t Ms. Tree or other “tough” female hero. She doesn’t say things like, “Move it, lady!” Instead, Howell allows her to be a vulnerable and lonely individual, whose career and personal life have gone off course. She drinks too much, and takes too many pills. In other words, she gets to be human.

Unfortunately, Howell doesn’t give her much to do. She disappears in the second act, only to reappear at the finale and not really do much. This does not really matter in terms of how Howell writes his female leads, as much as how he plotted the novel.

I wanted more from this book. But he gets points for throwing Bakersfield in toward the end.

Bonuses: +1 for one decent female character; +1 for Bakersfield

Penalties: -1 for the actual last smoking bartenders, who was a total letdown