Microreview [book]: The Republic of Thieves by Scott Lynch 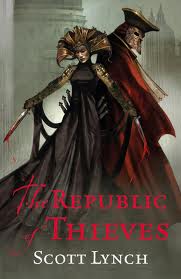 
Scott Lynch is back! Those of you who follow this blog no doubt know how happy this makes me, owing to my rather mixed experience with his Gentlemen Bastards series. The first book, The Lies of Locke Lamora, is an absolutely brilliant debut and a fantastic book in its own right (deserving of perhaps the rare Nerds of a Feather score of 9/10). His sophomore book and second in the series, Red Seas Under Red Skies, however, was mediocre at best. It was set up with a cliffhanger that could have been a game-changing betrayal, but in the end it was the reader who felt betrayed for picking up the book in the first place. The plot was unmemorable, but more importantly, the gimmick with which Lynch set up the book ended up undermining the reading experience. And it did not give any sense to the outline of the broader series (see my review of Red Seas Under Red Skies here). But no longer do we have to worry about whether to pick up the next book in this series. With The Republic of Thieves (Gentlemen Bastards #3), Scott Lynch is back in form. Oh happy day! Or as many happy days as it takes you to read!

The Republic of Thieves interweaves two stories. First, it tells the tale of Locke Lamora's current attempt to rid himself of the poison that no physiker or alchemist he meets can cure. At the very point when all hope appears lost, along comes a feared Bondsmage, Patience, who gives Locke an offer he can't refuse: if he goes to Karthain on behalf of Patience's Bondsmage faction and does his best to rig (or win, by any means) Karthain's quinquennial political elections, then she will cure him of his poison. Locke and his trusty sidekick, Jean Tannen, suspect the Bondsmages of playing an even deeper game, but find they have no choice but to follow along. Once in Karthain, they find themselves competing with a former Gentlemen Bastard, Locke's brilliant rival and his past love interest: Sabetha.

The second tale tells the story of Locke's childhood in Camorr, a story that will be of even more interest to fans of Locke Lamora. It centers on the trials and tribulations Locke underwent before becoming a Gentleman Bastard. Readers will learn more of his shady past, including his initial meeting with Sabetha, his growing conflict with her over who would become the true leader of the thieving group, and their hilariously funny attempt to save one of their master's old friends by going to Espara and staging a play from which the book gets its title, "The Republic of Thieves.'

Together, the two stories are focused on the central relationship between Locke and Sabetha. Everything else takes backseat. But in the process, Lynch reveals many more interesting tidbits or questions on Locke's own history and the world at large. Where did Locke Lamora come from? Why has he been able to keep his true name secret for so long, even from Bondsmages? And why was he smitten with Sabetha from the first time he saw her luscious red hair? Moreover, we learn a great deal more about the Bondsmages, but since I don't want to spoil anything for you, I'll leave it at that.

Sabetha is quite possibly the strongest female character I have read since joining Nerds of a Feather. A stone cold professional crook, Sabetha is strong yet compassionate, strategic and thoughtful, brilliant and merciless: the kind of woman men rightly swoon for. And swoon Locke does. But in Sabetha we find a flighty teenager at heart; even so, she is still much more sympathetic than other flighty leading ladies in fantasy (The Kingkiller Chronicle's Denna, anyone? -- the most annoying leading lady in recent fantasy). Whatever the case, Lynch does a great job of showing the sexual tension and teenage angst between Locke and Sabetha; even after they meet again in Karthain, a similar dynamic re-emerges, letting the reader lead his/her own imagined and awkwardly adorable relationship vicariously through them.

The strength of Locke and Sabetha's relationship is where Republic shines. Although the constant "are they gonna get together?" is trying at times and tiring toward the end, the dynamic between the two feels authentic. As do Sabetha's complicated feelings toward Locke--not only is Locke her possible love interest, but he is also the man who stole from her the leadership role in the Gentlemen Bastards.


Unfortunately, however, the two stories do not fit together as well as they could. Granted, both stories of Locke's past and present are compelling in themselves. Presumably, the story of his past was meant to show why his relationship with present-day Sabetha is tense and problematic. But it ended up showing nothing of the sort. The reader is left with the head-slappingly-difficult-to-understand conundrum of why in the seven hells are present-day Sabetha and Locke so cold and tense? In the end, the two stories were not linked together in a compelling way. Another round of editing could have fixed this, the biggest flaw I saw in the book. The only other problem was that the Karthain election storyline dragged on perhaps one chapter too long.

But these problems are offset by the fact that The Republic of Thieves is uproariously funny. The crisply written bantering prose not only lightens the spirit, it also helps us flex our laugh muscles. In fact, it has been a long time since I have laughed this hard while reading a fantasy book. For those who need a comparison, The Republic of Thieves is as laugh-out-loudtastic as Steven Erikson at his best (I'm thinking the sections featuring Tehol Beddict and Bugg in Midnight Tides).

More importantly, the book was resolved in a way that actually kept my attention (this time), and a threat was introduced that definitely re-invigorated my interest in the series. Whereas I went into reading this book worried about where Lynch would take the story and wondering whether I should even read it, now I can't wait for the next installment (thank the heavens for advance review copies!). With The Republic of Thieves, the Gentlemen-Bastards Train is back on track, heading to who knows where? I look forward to finding out.

Bonuses: +1 for all-encompassing hilarity; +1 for Sabetha.

Penalties: -2 for not linking the two stories together in a compelling way.