I can't contain my excitement as Gen Con is happening right now!  My plans involve participating in a King of Tokyo tournament, hoping to break a world record with a game of Catan and more!  While I won't be experiencing the convention until tomorrow, I feel that it is appropriate to provide a list of gaming top 3's leading up to promised land of gaming. 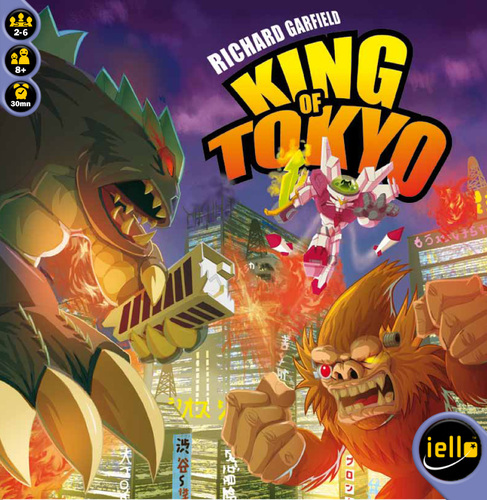 Top 3 Games I am currently Playing:
King of Tokyo -  From the creator of Magic, this dice game has truly captivated my gaming spirit.  Through the well balanced combination of the roll of the dice with power-ups that maintain a fair playing field, this game has not only has me hooked as a 34 year-old gamer, but has my 6 year-old son on board.  Truly a great game for the whole family.

Zombicide - While on the expensive end of things, this game provides numerous scenarios on surviving the zombie apocalypse.  The varying goals and map tiles of each game provide almost limitless possibilities, and the fact that you can play single player to large groups add to the playability of this gem no matte what your gaming core is.

Cards Against Humanity - The card game for horrible people will let you know who your true friends are.  This game, in the vein of Apples to Apples, is extremely entertaining and takes less than 2 minutes to teach.  Fun for all, assuming they aren't offended easily, this card game is guaranteed to entertain.

Top 3 Games I play with my kids:
Lego Board Games -  I have been very impressed with the quality of the Lego board games.  I bought

the first couple as a way to try to get my Lego obsessed son into gaming.  Our library has grown to include about 8 games and they are all a blast.  There are alternate modes to play and there is something satisfying about building your own die.

Settlers of Catan Jr. -  I was very nervous to break this game out with my son as I thought it would be too complicated or would not feel like the Catan I know.  I am pleased to report that the game does an amazing job simplifying Catan and maintaining the same feel.  My favorite feature is the marketplace which can eliminate trading.  While it impacts my ability to hustle my son, it maintains a level of fairness which is great.  My wife, who doesn't enjoy overly complicated games, prefers this version to the original.

Zombie Dice - While it may not be the most kid friendly with the eating of brains, shotgunning, etc., Zombie Dice has grown into a staple in our household.  My six-year old son and my three-year old daughter both understand the rules and are always down for a quick game.

Dungeon Roll - This entertaining dice based dungeon crawl is both simple and deep at the same time.  I have enjoyed this game solo and with my 6 year-old son.  It simplifies the mechanics of delving into dungeons into simple rolls of the dice that employ both strategy and luck.  Truly a fun game that is simple to learn and has some depth.

Unexploded Cow - This card based game in which you try to prevent your cows from exploding, is both easy to learn and simple to play.  A combination of humor and strategy keep this game light and fun and extremely accessible to new players.

Machine of Death - While this game hasn't shipped yet, I can't wait to play the game of creative assassin.  Players are dealt a card that determines how someone dies (the image on the kickstarter page is of banana peel).  Your job then is to ensure that you are successful killing someone by the prescribed message.

Top 3 Co-op Games:
Castle Panic -  When you have a competitive wife it is a good idea to have some cooperative games.  Castle Panic is a tower defense game in which you defeat trolls, orcs, and other baddies in an attempt to keep at least one tower wall up.  This one has proven to be a good game for the kiddos as well.

Flash Point - Things heat up quickly in this game where everyone assumes the roll of a firefighter trying to rescue people from a burning building.  It has a very Pandemic feel to it, as things get out of control quickly.  The game comes with two different building layouts and multiple levels of difficulty.  If you like a good challenge this is a good game for you.

Space Alert - In Space Alert you are a crew member of a spaceship that is stranded in an asteroid field.  Working as a team with limited resources, you must survive an alien attack while you attempt to get your engine fired up.  Set in realtime complete with a CD soundtrack, you won't know until you resolve your actions how your team faired.  Truly a unique gaming experience that all should try at least once.

Top 3 Card Games:
Munchkin - There are few gaming moments that bring me as much satisfaction as playing a wondering monster card when things look good for someone in a game of Munchkin.  In Munchkin you attempt to defeat monsters and achieve level 10.  You collect gear and teammates that help you on your quest, but your fellow competitors can either help you or throw a wrench in the gear of your plans.  While a little complicated at first, once the basics are down this is great game full of laughs.

Fluxx - No matter what your interests are there is bound to be a Fluxx version of it.  In Fluxx the rules change with every card played.  Your attempt is to achieve a goal that is ever changing.  I have played games that have lasted 2 minutes and games that last 30 minutes.  Every game is different and wildly entertaining.

Bang! - In this game you assume the role of someone in a spaghetti western.  There is the sheriff, deputy, outlaws, and the renegade.  Each individual has a clear goal, but you don't know who is who.  The only way to determine who is each person is to have a good old fashioned shoot out.