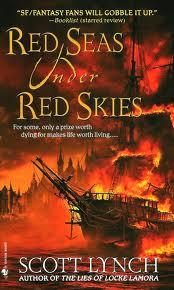 Red Seas Under Red Skies is Scott Lynch's second fantasy novel recounting the tale of the Gentlemen Bastards, Locke Lamora and his gang of witty thieves. His first installment of the series, The Lies of Locke Lamora, was a brilliant debut. Featuring witty dialogue, fantastic world building, a gang of complex characters you love to hate (or hate to love?), and a crisp and clear story of a con gone bad, Lies had all the makings of a perfect story. In fact, it was a bit too perfect, at least too perfect to serve as the debut of a broader series. The disastrously failed con had left the Gentlemen Bastards in ruins, with most of its members laying dead. Only Locke Lamora and Jean Tannen survived the tragic events in Camorr (they triumphed over the Karthain Bondsmage and the Grey King), but they were forced to go on the run. With many of my favorite characters gone and only Locke and Jean left alive, I did not see how Scott Lynch could continue the story arc and keep it as compelling as Lies. So I started Red Seas Under Red Skies with a good deal of trepidation.

Perhaps recognizing that he needed to regain a sense of tension, Lynch begins Red Seas with a cliffhanger: Jean betrays Locke on the pier of Tal Verrar. The rest of the book, which takes the reader back two years earlier, explains the path that led Jean to double-cross his best friend. This betrayal takes place against the backdrop of yet another impossible plan hatched by Locke and Jean. They plan to rob the Sinspire, an exclusive, thief-proof gambling den notorious for executing cheaters and thieves. Locke's newly hatched plan is complicated, however, by its entanglement in the factional politics of Tal Verrar, which revolved around three political poles: the Archon, the head of the military forces;  Requin, the infamous owner of the Sinspire said to possess a huge personal fortune; and the Priori, the political leaders of Tal Verrar. Just as Locke and Jean prepare their great heist on the Sinspire, they find themselves ensnared in the schemes of the Archon, who saw Locke as a useful pawn in his struggle for power against the Priori. The journey to the Sinspire heist thus takes the reader on an adventure through Tal Verrar and a delightful side journey where Locke and do their best to con a pirate crew into thinking they were, in fact, seasoned pirates. It is only shortly after their return from sea that Locke finds himself betrayed by his best friend.

The resolution to his betrayal, however, left me utterly disappointed and angry that I even picked up the book to begin with. This cliffhanger was the biggest misstep of Red Seas.

Jean, of course, did not betray Locke. He simply pretended to do so in order to save Locke. Granted, this resolution to the cliffhanger should have been obvious. But Lynch peppered the book with references to Jean's growing disillusionment with Locke that would make his ultimate betrayal more believable (albeit not that believable). After resolving the betrayal cliffhanger in less than a page, I wondered why I had even read the past few hundred pages. This was, in short, a major structural misstep.

Furthermore, the book ends rather abruptly and implausibly. An anonymous threat is suddenly revealed, and Locke and Jean make use of their collective wits, attempting to navigate the dangers of Tal Verrar and to pull off their heist of the Sinspire at the same time.

Granted, the above problems are balanced by the book's considerable strengths. Red Seas features fantastic world building, witty dialogue, lovable characters, and some of the most fantastic insults I have read in a long time. Further, the deepening friendship (bromance?) between Jean and Locke, the point of the book, is touching. In the end, Red Seas is a real page turner and a fun overall read. A good book, but one that does not come close to reaching the heights of The Lies of Locke Lamora.


Bonuses: +1 for witty dialogue, great characters, and a fun overall read (this book is a real page turner!); +1 for intelligent villains and interesting plot twists.

Penalties: -3 for the book's structure, which blew the Jean Tannen betrayal way out of proportion to its importance. It would have been more interesting and fulfilling without this tension-creating gimmick.