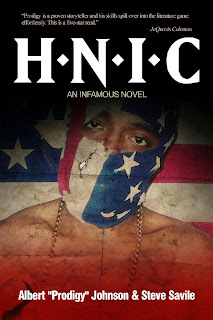 
Full disclosure: I began Albert “Prodigy” Johnson’s book with trepidation. It’s not that I have anything against a rapper writing a novel—or novella, in this case—it’s just that I’m wary of non-authors penning books. I felt much the same way when I began The Dewey Decimal System by Nathan Larson, guitarist for Shudder to Think. And as occurred upon reading Larson’s novel and its sequel, my wariness was thoroughly unwarranted.

Prodigy is one half of the hip-hop duo Mobb Deep. While he’s still performing, he has taken a turn to the literary world, first with his 2011 autobiography, My Infamous Life, and now heading up the urban crime imprint Infamous Book through the always-on-point Brooklyn publishing house Akashic. HNIC is the first of Infamous’ offerings. And if you’ve got an afternoon to spend reading something that doesn’t suck, here you go.

HNIC is a pure crime tale: Pappy is a professional thief, albeit one with some non-criminal ambitions. Like countless fictional crooks before him, he’s planning one final job to finance his escape from the underworld. Of course when your best friend/partner in crime is a ruthless psychopath, any “one last job” plan is doomed to fail. And, as crime fans well know, when plans go sideways, people get killed and others need killing.

There’s really nothing terribly original about HNIC’s plot, which is by no means a bad thing. As a reader, I often enjoy such well-worn tropes. Otherwise, I wouldn't be a fan of crime fiction. There’s nothing inherently wrong with these heist-gone-wrong stories, provided they’re done well. To a considerable extent, the fact that HNIC resembles the plots of a thousand other books and films is a testament to the appeal of this story. After all, what fun would we have if the heist went off without a hitch? There’s only so many times you can watch Ocean’s Elevan. But we’ve watched the fuck out of Reservoir Dogs.

The strength of this novella, in addition to its straightforward prose and rapid pacing, rests on the universal theme at its center: loyalty. Loyalty and the bullshit our friends put us through. Granted, most of us don’t have buddies who force us to participate in a robbery and then try to put a bullet in our heads rather than split the loot squarely. But we all have buddies who get us to do things we would rather not—“Just one more drink”—and then who bail when things go badly. Like any good work of crime, HNIC is grounded in such common experiences and, like any good work of crime, it speaks to all of us, despite the fact that very few of us can bypass an alarm system through some computer trickery.

As a sociologist a white sociologist in my real life, I would be remiss if I didn’t address the “urban” crime subgenre. We wouldn’t need such a subgenre if the world of crime fiction wasn’t so lilywhite. Perhaps by default, or perhaps because of the fact that I’ve been so thoroughly socialized into the American racial system, I read very few novels with non-white protagonists. Other than the Dewey Decibel novels, this is the only crime novel I have been sent for review featuring non-white characters. (And it’s no surprise that the Decibel novels are also published by Akashic.) So I get the need for “urban” crime fiction, and its cousin street lit.

But as I read HNIC, I was struck by the fact that the race of the characters, heroes and villains alike, was very rarely apparent. Johnson and Savile in fact only brings it to the fore when the plot requires it. For example, Pappy mentions that white people’s apparent tendency to think all black men look alike is a bonus when conducting a robbery. Other than for a few specifics, Pappy could have been a Boston Irish or an East LA Latino. Crime fiction works when it speaks to us as humans. That’s part of our attraction to the genre: we find ourselves identifying with the characters despite the fact that our lives differ so incredibly. I may not be a backwoods hillbilly, but I get what drives Boyd Crowder. And I may not have grown up in a Brooklyn housing project, but I nevertheless sympathized with Pappy’s determination to escape his past, to rid himself of that which make him who he is. I’ve been running from Bakersfield for ten years now. And like Pappy, I can’t escape who I am—and who my friends are.

Perhaps one day we’ll finally become a society that doesn’t need racialized subgenres. But until we get there, Infamous books is a necessity. Either way, I’m reading.

Penalties: 125 pages...Granted, I usually complain about the page count of crime fiction (over 250 and I'm bored), but in this case I could have kept reading for another 125 pages