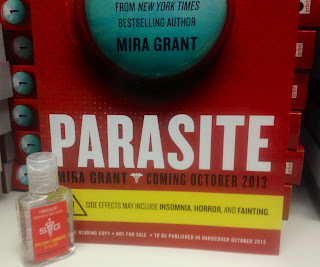 You know how allergies in children are multiplying exponentially recently, and how some people blame overuse of antibacterial soaps and overprotective parenting and hypoallergenic pillows and whatever? Well, what if that problem reached epidemic proportions, and somebody came up with a quick-fix solution—let's call it an 'intestinal bodyguard'—an implant that could regulate your body's immune system, administer necessary medications, and pretty much do everything but make popcorn? Sounds pretty sweet to me, so I can see why, when marketed like this, most people in the near-future world of Mira Grant's Parasite jump all over themselves to get one.  But like all deals that seem too good to be true (curse you, Nigerian prince of emails!), there's a catch.  That implant we're talking about? It's this.

Since in Grant's world, practically everyone has voluntarily swallowed a genetically engineered super-tapeworm egg to take advantage of the myriad health benefits of being a gracious host, it's kind of hard to feel bad for them when their 'guests' get riled up and the inevitable disaster begins.  I won't say much about how the plot unfolds, but let's just say that with these tapeworms, many people get a) more than they bargained for, and b) the hard goodbye (Sin City style, if Sin City was infested with parasites—and come to think of it, Sin City probably is!).
So the book's sci-fi premise is a bit implausible, since I can scarcely imagine a scenario in which even considerable health benefits could convince me to let a tapeworm play house inside me. In fact, just the thought of that is so creepy I'm getting phantom pains in my abdomen, and having flashbacks to Alien...
But anyway, if one suspends one's disbelief, Grant rewards us with an often entertaining account of how such a world could start to fall apart. I say 'entertaining' because creepy sleepwalkers flopping around in the middle of the street or whatever is just an awesome image, right out of a sci fi movie storyboard, and 'often' because of some stylistic and pacing issues in the telling.
The good stuff first: many of the developments in the story occur in or around the mega-corporation Symbogen, and Grant gives a masterful portrayal of the way a company responsible for such a potentially revolutionary product—to wit, the super-tapeworms—might rush both to ram it through FDA and other testing as quickly and unsafely as possible, and also to cover its tracks in the event someone discovers a 'situation' with that wonder product. Plus, however unlikely a scenario it may be, it's an intriguing one, and Grant deserves a lot of credit for exploring the ramifications, especially on the level of institutions. The way she opens each chapter, with quotes from interviews/written work
s of various key characters, is an especially nice touch.

And now the bad: the protagonist Sal(ly) Mitchell is incredibly annoying. Or rather, Grant's ceaseless description of her anxieties (legion) and the utterly uninteresting life she's leading despite having narrowly survived a super-serious accident failed to win me over to Sally's side as a reader. I kept hoping Grant would pull an Executive Decision-like 'airlock Steven Seagal and save us from his on-screen charm' move and kill her off early on, switching focus to someone cooler, but sadly, we stay with Sal.

And since this is the first book in a planned series, I think we're stuck with her for the future, unless of course I'm messing with you and, like in John Dies at the End, the main character does just that. Those of you who have read/seen said gem will get what I mean!
In Sal, Grant has crafted a character whose response to virtually everything is "I don't want to know." Nobody likes ostriches, am I right? There's an M. Night Shyamalan-esque 'twist' to Sal which from about 20% of the way in was blindingly obvious to everyone, reader and characters alike, except for Sal herself, who fought against the big reveal the way Tea Partiers fought Obamacare. This being the only book by Grant that I've read, I can't say whether this is a problem with Grant's writing in general, or with fleshing out this particular character, but when giving us a window on Sal's internal thought process, Grant falls back again and again on a two-sentence combo, some variation of the phrase "I wasn't sure I wanted to know the answer. I wasn't sure I'd ever sleep again if I didn't know the answer." (This particular instance is a direct quote from about 70% of the way through, but other examples abound.)
And if Sal has a favorite word in the recesses of her own mind, it's definitely 'uncomfortable', which is what pretty much everything makes her. You know who I like better? Oedipus. Sure, he did the nasty with his mom and totally murdered his dad, but when the time came for him to face the truth, he did it (and even went the extra mile by stabbing his own eyes out in penance!).  Sal, I'm afraid, could use a little truth-facing, eye-stabbing courage. The truth will set you free, but nobody ever promised it'd be all about bunnies and ice cream, you whiner!
The book is also, shall we say, deliberately paced.  If you like the Fast and Furious series, consider yourself forewarned—this book is not that. It's more like a Koreeda Hirokazu movie, really, or, dare I say it, The Fellowship of the Ring. Nothing at all happens of note until 40% of the way through (in Koreeda's case, usually nothing at all happens, period! And yet some of his films are just brilliant—it's an enigma), though it does slowly build in excitement after that (hampered mightily, in this case, by head-in-the-sand Sal's reluctance to participate in the story unfolding all around her). Perhaps the book suffered from being part of a series, with Grant saving some of the good stuff for later installments?
So all in all, Grant's Parasite is a mixed bag—an intriguing if wildly improbable what if that is handled fairly well, though despite, not because of, the main character and her infuriating reluctance to see the truth and let the story get on with itself.

Bonuses: +1 for the concepts of Symbogen and for the Banks interviews heading each chapter, +1 for a bizarre and fascinating premise

Penalties: -1 for Sal and her mantra "I don't want to know", -1 for Koreeda pace without Koreeda magic touch

Nerd coefficient: 6/10 "Still enjoyable, but the flaws (I'm thinking of you, Sal!) are hard to ignore"

See why a 6 actually means Parasite is better than most books I've read!
Posted by Zhaoyun at 12:01:00 AM