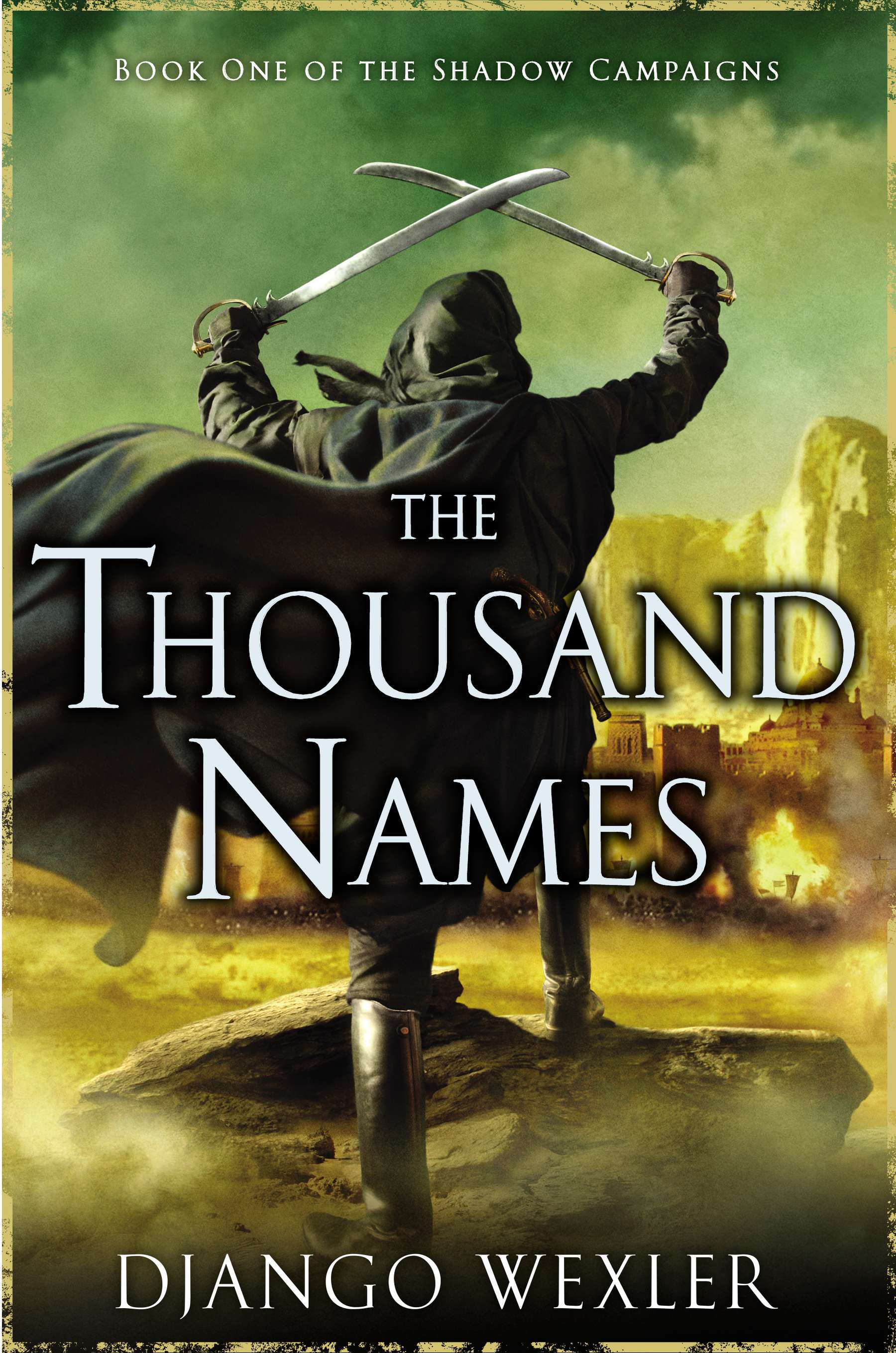 Flintlock fantasy is a term you hear a lot these days. The basic formula is fairly simple: take musket-era Europe as your source material, add some magic and voila! Doing it well, of course, is another beast entirely. But it's easy to see what the attraction is--after all, early modern Europe was a time and place of great social transformation. Feudalism was on the wane, to be replaced by the modern state (and then, later, the nation-state). Capitalism was in its emergent phase, stimulating a major round of urbanization. European navies (and private companies) sailed the world in search of gold, land and spices--usually to the detriment of the people they found there. And then there were the firearms that so completely upended military relations--the muskets that killed off the cavalry charge and the canons that made castle walls obsolete. Yes, it was a time of change--big change--and periods of upheaval are good springboards for fiction.

Django Wexler's The Thousand Names takes place in Khandar, a colonial dominion of the Kingdom of Vordan. Khandar is loosely based on Egypt, though a version of Egypt that never experienced the transitions to Christianity and Islam. Vordan is a sort of France-meets-England-meets-Germany. Its dominant religion is alt-Christianity, and specifically the alt-Protestantism of the Free Church. For members of the Colonial Army, Khandar is a sort of hardship posting--a place they send you when you've done something wrong, or a place you go to when you are trying to escape something. The two protagonists of the book, Captain Marcus d'Ivoire and Ranker-turned-Sergeant Winter Ihernglass, are of the latter persuasion. So it stands to reason that when a fanatical religious cult stages a rebellion against the colonial dominion, Marcus and Winter are among the few Colonials who aren't in a rush to get the fuck out of Dodge.

Despite the hopes and expectations of most of the other soldiers, though, Vordan has little intention to leave Khandar to the Khandarai. Rather, the home country sends Colonel Janus bet Vhalnich--a reputed military genius--at the head of a smallish force, charged with retaking Khandar and putting its "rightful" ruler, the recently deposed Prince Exopter, back on the Vermillion Throne. Janus is indeed a military genius, but one playing a long-game opaque to even his most trusted of confidants....

As you can probably tell, The Thousand Names is a work of military fantasy, and as such, should appeal to anyone with interests that run in that direction. It helps that Wexler is clearly well-read on both early modern tactics and the daily life of soldiers: Marcus and Winter face any number of realistic obstacles--environmental, tactical, supply or moral oriented--as well as significantly different types of opponents, from a loose and untrained but large irregular army to a Vordanai-trained force to Bedouin-style guerillas. Every battle teeters on the edge of disaster and is positively dripping with tension.

As the book progresses, Wexler seeds a second plot related to Vordan's attempted reconquest, or rather, a crosscutting narrative that reconfigures our understandings of what is at stake. This is where the magic comes in, and for the most part it's nicely done. There's an appealing air of mystery to everything, and there are hints at a broader political struggle enveloping all sorts of powerful actors from beyond Khandar's borders. Wexler tantalizes the reader with just enough information to make the wait for book #2 unbearable.

Wexler also does a good job with his two protagonists. Marcus is a pragmatic figure, one who has gained the Colonel's confidence but still has that of the fighting men. Winter, it turns out, is a woman disguised as a man--someone who joined the Colonial forces and faced down the constant fear of discovery as a means to escape captivity in a Dickensian workhouse. Both are believable, relatable and have an appealing depth to them. Many of the side characters, though, feel a bit two-dimensional. Janus, for example, is a bit theatrical for my tastes, while Winter's nemesis and former commanding officer Sergeant Davis will seem familiar to anyone who's watched their share of Popeye cartoons. Then there's Jen Alhundt, the minion of (nefarious) Duke Orlanko posing as an innocuous civilian observer to the campaign. The problem, of course, is that we know from the outset that she's a minion of (nefarious) Duke Orlando, making her protestations of innocuity rather difficult to believe--yet believed they are.

A second concern centers on the portrayal of colonialism. While reading, I periodically found myself questioning why Vordan is even in Khandar. After all, European colonialists were always after something, and usually something material--gold, slaves, land, spices, trade routes, etc. But there don't appear to be any colonial economic institutions to exploit the natives with, nor any ventures or entrepreneurs to do the exploiting. Instead, there's an unpopular prince backed by a lackluster force of foreign soldiers. Is the venture purely power political? If so, in relation to whom or what rival force? There *is* a possible answer alluded to towards the end of the book, but it's really an underlying conspiracy--a truth beneath the accepted truth. For that to really work, though, we still need that accepted truth, and the fact is that we don't really get it.

The lack of attention to the economic or political bases for colonialism strikes me as a missed opportunity. As is, we don't get enough of a sense of how colonialism is experienced by the colonized, outside a few short chapters from the perspective of Khandarai elites, nor how the Old Colonials really feel about the Khandarai. Marcus and Winter, as two unsually thoughtful individuals who share a sensitivity to Khandar and the Khandarai lacking in most of their peers, would seem to be perfect conduits for exploration of such ideas--even if in an offhand way. I wanted to see more interplay between colonizer and colonized, and to watch Marcus and Winter come to grips with their ambivalence for the colonial enterprise that nevertheless saved them from their own personal hells. If Wexler returns to Khandar in subsequent volumes, I'd love to see him tackle some of these issues more directly.

On balance, though, there's much more to applaud than criticize about The Thousand Names. Wexler has written a smart and engaging novel that's well-paced, nicely detailed and full of memorable scenes. If you're new to flintlock fantasy, then you would do well to start here.

Bonuses: +1 for the rich treatment of military subjects; +1 for the exquisitely rendered battle scenes.

Penalties: -1 for the Jen Alhundt believability gap; -1 for missed opportunities to explore colonialism.