'Troll' is a battle to define Nordic identity

This movie recycles all the clichés of the kaiju genre, but the setting gives the conflict a fascinating context of interpretation 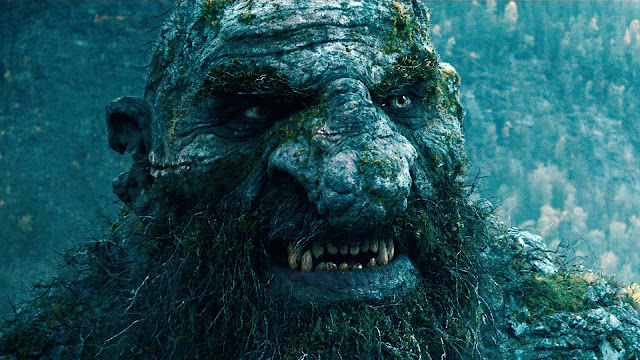 The closest thing to a national trauma for the Norwegians is the 2011 shooting spree by neo-Nazi terrorist Anders Breivik. Of course, Troll isn't about neo-Nazism, but it does portray a catastrophe with multiple deaths, while engaging with themes related to the ongoing battle for the soul of Scandinavian identity. Legends about trolls are a distinctive part of ancient Norse culture, which has become a contentious political topic, to put it mildly. One of the tensions currently underlying public discourse in Scandinavian countries is how to honor the ancestral heritage of the Norse peoples without perpetuating the same talking points of the supremacist fringe. So, when the characters of Troll comment on the repercussions of depaganization or the downsides of modernity or the value of traditional folklore, the connotations of the discussion inevitably extend beyond the plot and into the real world.

The first lines of dialogue in Troll feature a young person mocking an old person's supposed frailty, but the scene shows us the old one completing a feat of athletic prowess while the young one struggles to keep pace. In this brief setup, the film establishes one of its central themes: the folly of seeing a conflict between old and new. This refers to a long debate in Norwegian culture: the 19th century saw an entire literary and artistic movement try to grapple with how to define a national identity for a people that had been denied self-rule for centuries. That era sparked a reappraisal of pre-Christian beliefs, customs, stories, and material culture. Norwegians developed a renewed appreciation for their mythic heroes and fairy tales. This act of collective introspection about the past is repeatedly alluded to in the script of Troll: when the key to understanding the monster doesn't even come from the biologist, but from the literary scholar; when a highway construction project is implied to defile a once-sacred mountain; when one character illustrates the bloody cost of replacing the ancient Norse religion with Christianity; when our protagonist realizes that the actual mission is not to kill the monster but to empathize with it.

It's possible to sense an ambivalence in Troll about what exactly the monster represents. Modern Nordic culture seems to have no use for magic or spirituality; the return of a creature of legend would threaten the secular order based on reason. On the other hand, those legends still exert a strong pull on Nordic consciousness, which might view Christianity as a latecoming usurper. Note, for example, how the climax of the movie is about preventing the monster from reaching the royal palace, a not very subtle metaphor for a threat to the stability of the nation. The monster is simultaneously a sympathetic and tragic character: it's an authentic part of the Nordic soul that was unjustly cast out, but must stay that way lest the nation burn. This is the anxiety that Troll symbolizes: Scandinavians still need to figure out how to express due reverence for their history without having it turn into an incontrollable force of destruction. This is why the protagonist's father, the character most in touch with the Romantic side of his culture, alternates between dreading the monster and wanting to save it, and also why the ending is told in such a way that we lament the monster's defeat.

Troll isn't particularly notable in terms of spectacle. It's well filmed, albeit inconsistently paced and not always well acted. But it does shed a valuable light on the exercise of inward looking that is occurring in Scandinavian countries regarding how to feel about their national heritage and how to deal with its deformation.