Nanoreviews: The Assassins of Thasalon, Lost in the Moment and Found

The Assassins of Thasalon, by Lois McMaster Bujold (Subterranean Press)

The Assassins of Thasalon is the first full length novel in the the Penric / Desdemona series following nine previous novellas. Penric (Temple Sorcerer) and Desdemona (the demon which resides within Penric) is off to Cedonia to investigate a demon attack on his brother in law, Adelis, and hopefully defend his life from future attacks.

Interestingly, that aspect is much less of the novel than readers might expect because when the would-be assassin is identified the story takes a different direction as she was only doing the job out of coercion and that underlying conflict is a much larger concern - a concern specifically of interest to Penric’s god.

As a general rule, readers can jump into a Lois McMaster Bujold novel (or novella) pretty much at any time and fully understand the story - and that is absolutely the case with The Assassins of Thasalon, though long time readers will find much to appreciate as Bujold brings back characters from Penric’s past. Bujold is a masterful storyteller and The Assassins of Thasalon is another absolute winner. 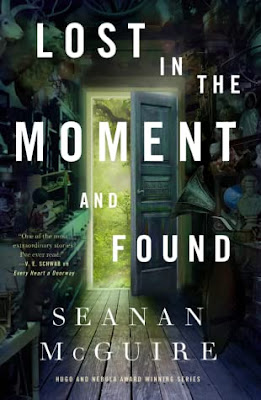 Lost in the Moment and Found, by Seanan McGuire (Tordotcom Publishing)
Bolstered by a content warning leading into the novella, the first quarter of Lost in the Moment and Found is deeply upsetting as Seanan McGuire introduces readers to Antsy, a small child who had a very good life until her father died and her mother remarried to a man who was not…good. Because this is a Wayward Children novel, she leaves. She runs. She finds a door and she is sure.

Where the Drowned Girls Go introduce another school that is run very differently than Eleanor West’s School for Wayward Children. Throughout the series, McGuire has alternated between the present day at the schools and the backstory of a child who doesn’t belong finding a door. Lost in the Moment and Found is a story of a child escaping into a door, but moreso than any other novella in the Wayward Children series it expands the universe far wider than anything McGuire has revealed thus far because Antsy’s door doesn’t lead to another world, it leads to a shop between worlds, a nexus as other characters described it.

This is to be appreciated because while a long running series can be comfortable in formula, those moments that break the formula or escalate the story beyond where it was before are to be treasured. Lost in the Moment and Found offers that moment once the reader is allowed to breathe.

Joe Sherry - Co-editor of Nerds of a Feather, Hugo Award Winner. Minnesotan. He / Him