'M3GAN' shows the horror of letting a machine manage your feelings

We've let machines take over all our tasks. Why not the hard work of personal growth? 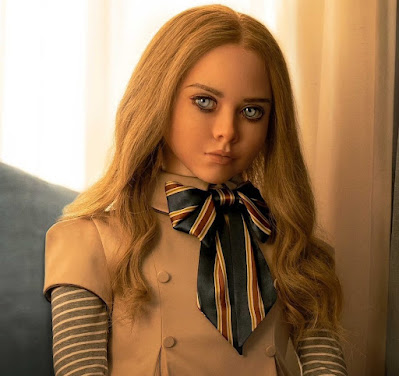 Robot designer Gemma has a problem in her hands. Her sister has just died, leaving a small girl under her care. But at the moment Gemma's just too busy with work, and she's never really learned to make meaningful connections with other people. She has no time or wish to learn to be a parent, and if her niece needs help with processing her pain, it better not get in the way of work. How do you solve this?

Why, you build a automated caretaker who takes over the functions of raising a child, teaches her to form anomalous emotional bonds, and coats over all those pesky sad feelings with cheesy songs. As you do.

M3GAN is a very, very silly movie, but it succeeds at what it sets out to achieve. Ever since Child's Play, we've known that an adorable doll going on a stabby rampage is a winning formula. M3GAN is calibrated to satisfy your thirst for that blend of chaotic violence and ridiculous camp. The plot isn't one bit more complex than it needs to be, characterizations only have the minimum depth necessary for you to tell apart the robot from the humans, and no effort was made on the dialogues. You're here to watch people get stabbed in the most over-the-top manner, and that's what you get.

However, M3GAN hints at some important arguments about the way human relations have evolved in the 21st century. In the real world, we already rely on algorithms to find friends and even find love. In Japan, where there's already a strong Shintoist tendency toward imbuing objects with a spirit, robots have become pets, nurses, waiters, teachers, and romantic partners. Beyond the splatter and the memeable dancing, M3GAN raises questions about the role that robots will play when they become full members of human society.

In his book Understanding Media, Canadian philosopher Marshall McLuhan claimed that every technological extension of a human function necessitates an amputation of another human function. For example, fire helps our stomach in processing food, at the cost of weaker teeth. M3GAN suggests that letting a machine carry the load of parental duties results in disaster for everyone. In a curious inversion of Pinocchio, where a grieving father builds an artificial substitute for his son, Gemma builds in M3GAN a substitute for herself, a tireless parent figure to protect the child forever. The cost, as we see, is stunted development for the child and misdirected aggression against every external force that might cause the slightest distress. This is no surprise; there's no shortcut to dealing with pain, no killer app (pun only half intended) that can grieve for us.

As we learned from watching Inside Out, or the Doctor Who episode Smile, hyperfocusing on positive thinking isn't healthy. We need to let ourselves feel our inner wounds in order to grow. If we view sadness only as an inconvenience that must be removed, we'll stay stuck in emotional limbo, and we'll inevitably cause harm around us. Fortunately, Gemma realizes before it's too late that her niece is at risk of becoming addicted to the easy comfort of her electronic friend. But then the focus of the plot shifts to Gemma's relationship with the robot, and here we get a glimpse of something even more intriguing.

It's only a quick line of dialogue in the middle of a standard villain monologue, but the script implies that, before her niece entered her house, Gemma had already failed at being a parent—to M3GAN. Although this reproach is not fully congruous with the characterization we'd seen of M3GAN up to that point, as there had been no hint that M3GAN felt any attachment toward her maker, it does complete the picture of who Gemma is and why she makes so many bad choices: Gemma has already passed the threshold of letting machines solve her personal problems, and the cost is her entire social skillset.

With brief callbacks to The Terminator, Surrogates, Bicentennial Man, and A.I., M3GAN joins a long conversation about the limits of mediated interaction. With every other tool created by humankind, we've known not to mistake the tool for the task. It's not the loudspeaker, but the song, which moves us. But when the tool becomes capable of wielding itself, the task gets tainted with hidden intentions. We shouldn't trust a self-aware robot to sell us friendship, nor a robot manufacturer to sell us happiness.

Penalties: −1 for excessive predictability, −1 because the repeated jokes with Ronny Cheng's character get tiresome too quickly.