The horror oriented story of a group of astronauts and cosmonauts who find that the Earth below them has suddenly changed, and not at all for the better. 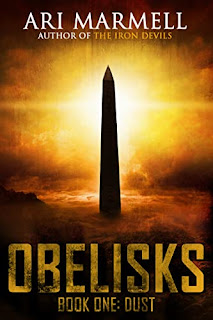 Flight Engineer Cynthia Han has a problem. Well, she has the problem she knows about, the health condition that is going to make this visit to the International Space Station her last, even if her fellow crew doesn’t know about it yet. But what she doesn’t know, but soon finds out when Mission Control fails to give them their a.m wake up call is that while she and the crew have been sleeping (or trying to sleep, and the crew includes a guest, a Elon Musk like billionaire) is that something catastrophic has happened to the Earth. And Getting back down is only the start of their adventure.

This is the story of Ari Marmell’s Obelisks.

Obelisks is a piece that starts firmly in the realm of science fiction, and then lures the reader over the borders of science fiction and into horror. The lack of communication with Earth and the distressed visage of the Earth from orbit lead the astronauts to try and return to Earth. In doing so, the countryside of Texas (and there is some very good evocation of place and space in the novel in describing various areas of Texas), Cynthia and the others quickly learn that a worldwide catastrophe has struck, seemingly involving strange obelisks with weird symbols on them.  The astronauts soon have to shift into a mode of not just finding out what happened, but surviving the changed and now very dangerous landscape they find themselves in.

Horror, for me as a reader, is not quite so much a genre so much as it is a mode, a filter, an overlay on other genres and other works. It’s a mode meant for readers to feel negative emotions, primarily fear, as the primary goal of the work. Fear may be the mind killer in Dune, but fear (or sometimes revulsion and disgust) are what makes horror tick. If you, the reader, do not get that fear reaction when you read a piece, then it is not successful for you as a work of horror in my opinion.

So, how did Obelisks stack up for me? It must be noted that I do not and never have read or watched a lot of the horror subgenre¹.I am not a connoisseur of the horror experience. From my perspective, my science fiction/fantasy brain did not react with fear to a lot of what was happening on the page. I think for me movies evoke horror much more successfully than the printed word does. It may be that aforementioned frame. Cosmic Horror, for example, comes across much more like dark fantasy or dark science fiction on the page than as a primary vehicle for Horror. But again, this may be because of my limited reading of Horror.

There are some genuinely terrifying scenes in Obelisks that did evoke that fear response in me. In particular, there is a scene with our protagonists in a hospital, and the ah, entity that they encounter there that definitely raised the hairs on the back of my neck. Other scenes that I think were intended to convey horror worked less effectively for me as horror pieces per se but I recognize and can see that was the intent.  The “anyone can die” approach is definitely an aspect of this novella that firmly helps keep it in the genre of horror as well.

But returning to  looking at this as a science fiction story, it’s a puzzle story, a story of what is actually going on down on Earth and how the astronauts can survive it. It’s the story of a diverse group of people with various skills, (and in Cyn’s case) a ticking time bomb of a condition, and how they deal with it. In science fiction terms, the story is more successful in general for me. There is a good and interesting group of protagonists, however they are winnowed² that are put under a pressure cooker of a situation.  There is definitely a question as to whether this is really a science fiction or fantasy story, what in fact the origin of the titular obelisks really is.  We get a lot of speculation and a narrowing of the possibilities, the novel flirts with some possibilities but nothing truly definitive on the nature of the Obelisks and the phenomena associated with them.There is also some very smart (and some very dumb) survivors on the ground. Marmell does a good job in showing how people on Earth are dealing with the situation, and gives us a wide range of how people are doing so far.

It must be said, if that isn’t clear, that this is not a complete tale in one story. This story ends after a dramatic and key encounter, but it is not a resolution of the overall story in the least and does not pretend to. So, the usual caveat of whether you are comfortable reading a book whose story is not the full story and will not give you an off-ramp if you decide to read just the first novel, applies.  I AM curious how Marmell will conclude this story and I am invested enough in Cyn and most of the other characters in order to read that second volume.

Bonuses: +1 for a well drawn and intriguing situation, keeping the reader guessing

+1 for a good group of characters

Penalties: -1 for me, the horror elements were not as strong as they might be, but that might be highly idiosyncratic.

¹It must be noted that in addition to the regular run of Choose your own Adventure books I read when I was young, I also read several “Plot your own horror” books in that era and some of those books scared the living daylights out of me. But in this modern day I do not seek out horror fiction commonly.

²It should be noted that the aforementioned Elon Musk billionaire is annoying but shows some redeeming qualities.