The Rook and Ruin series continues with an even more dangerous demonic mystery, set in a border state to two great powers 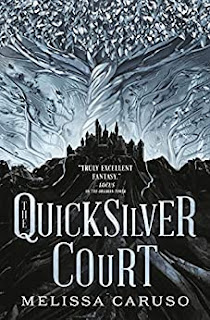 So, your grandmother is possessed by a legendary demon, the very land you live in might turn against you as a result at any time, and there is at least one other demon loose in the world, too. Things can’t get worse, right?  Wrong. The Witch Lords of your homeland of Vaskandar and the Serene Empire might yet go to war, or go to war against your land to kill the demon, and there is something weird happening in the border kingdom of Lostice. And you, as a new member of the Rookery are going to find out what, and find out things you didn’t wish you know about your friends, and also yourself.

This is the story of Quicksilver Court, second in Melissa Caruso’s Rooks and Ruin series.

As fun and good as the Swords and Fire series (which begins with The Tethered Mage) was, I think that the Rooks and Ruin series has really leveled up Caruso’s skills on a number of levels, bringing a strong and vibrant voice to epic fantasy and propelling it to greater heights. In The Quicksilver Court, she deftly picks up Ryx’s story and extends, develops it, and provides revelations and reveals that feel organic to the story itself, and to the first two novels.

The actual main plot of the story is deceptively simple: the Rookery goes to the border kingdom of Lostice and decides to discover and find out what mysterious goings on there are, and if they are tied to the demon problem introduced in book one. This is also the first “mission” for Ryx as a new Rookery member, and this provides a way to see how she can act in the field with her new colleagues. We start the novel, though with a scene within Morain, because Caruso knows to tie threads and provide ramp ups into the action. Not everyone is going to have read The Obsidian Tower (although I strongly recommend it) so this provides a way to “encapsulate” who and what Ryx *was* before sending her off in her new role.

Caruso really focuses on Ryx as a protagonist and on her relationship with the Rookery throughout the novel, always good to layer in personal stakes and personal relationships, even as things deepen and get worse. And they surely do. It is not much of a spoiler to say that the problems in Lostice are demon based and Ryx and her new friends and companions are sorely pressed. The demons here in particular by their very nature and type provide weapons to strike at our heroes and develop their backgrounds, histories and how they relate to each other and even to themselves.

This includes Ryx. The story of who and what she is, as detailed in The Obsidian Tower, turns out to be woefully incomplete. I guessed the answer to the revelation and the discovery of this by Ryx (Caruso excels at having characters finding out new and sometimes terrible facets about themselves, their family and their history). If Caruso ever wanted to tread into Cosmic Horror waters in the manner of, say, Ruthanna Emrys, I think could be really good at it. I did not quite guess at another revelation Caruso makes, one that hit me in the feels almost as much as the revelation about Ryx itself. Caruso knows to leaven this as well, so there is a potential maybe kind of possible romance interest for Ryx in this novel (if you read the first novel and know the tropes, you will guess who right off). They, besides Ryx are perhaps my favorite character, I recognize the archetype and like it all too well and have used it in my RPG campaigns and such.

Character really is the secret sauce in Caruso’s work. There is plenty of chewy and interesting worldbuilding to be sure. For instance. we learn more about the Demons, what they did, what they themselves think of the past and what they did. The Demons introduced in this book are characters in and of themselves. Sure, they are malevolent entities from another dimension who once subjugated humanity and were cast out with great difficulty and effort. Sure, they are alien and difficult to understand and comprehend. And yet, they are beings with personality, emotional states, and even histories. I never thought I would emphasize with a demon, but in The Quicksilver Court, Caruso manages it.

There is also a good sense of place in Caruso’s novels. The eponymous Quicksilver Court isn’t quite as iconic as Gloamingard, but there is a good sense of space and place and Caruso brings it to life. Her time as a LARPer has clearly paid off and in spades, you can get a real feel for the palace and the places within it in the novel. It’s immersive and well done detail that brings this border nation to life.

And let me mention that using a border nation as a setting here is a stroke of inspiration that not a lot of fantasy authors seem to go for, and they should. You can have mighty empires, hearts of competing civiilzations, your Rome and Persia, your Byzantines and the Caliphate, your Imperial Russia and your British Empire.  You can have your wildernesses, your barbarian lands where civilization ends and a different form and sort of world prevails.

But what about vassals, border states, client kings? They are underutilized I feel in fantasy fiction. The idea that you have this ostensibly independent entity, yes, but its got a really big neighbor nearby, sometimes *two*, who can’t quite conquer you, but can sure lean on you hard when they want to, and they often want to. As a resident, or a leader of such a polity, being in a client kingdom is good, until events in the large polities near you make your life much less attractive. And like as what happens here in the Quicksilver Court, when things turn south in your own kingdom, the big neighbor has Opinions and will not be afraid to exercise them.  Caruso uses Lostice very effectively indeed as a setting.

I could go much further on the virtues of the book but I am going to note one more. This is the second book in a trilogy and second volumes in trilogies can be problematic. Not so here. With the revelations, deepening of characters, deepening and developing of the world, there is none of the “wheels spinning” that many trilogies, even today, suffer from. For all of the deep length of the series and this volume, clocks tick, things happen and the situation continues to evolve in satisfactory paths. I strongly look forward to the third book in the trilogy, The Ivory Tomb, to see how Caruso works the landing in Ryx’s story.

Bonuses: +1 for very strong use of character

+1 for excellent worldbuilding and deepening of the world

+1 for avoiding the traps of many middle trilogy novels

Penalties: -1 Doesn’t quite stand alone as an entry point as much as the author tries to make it so